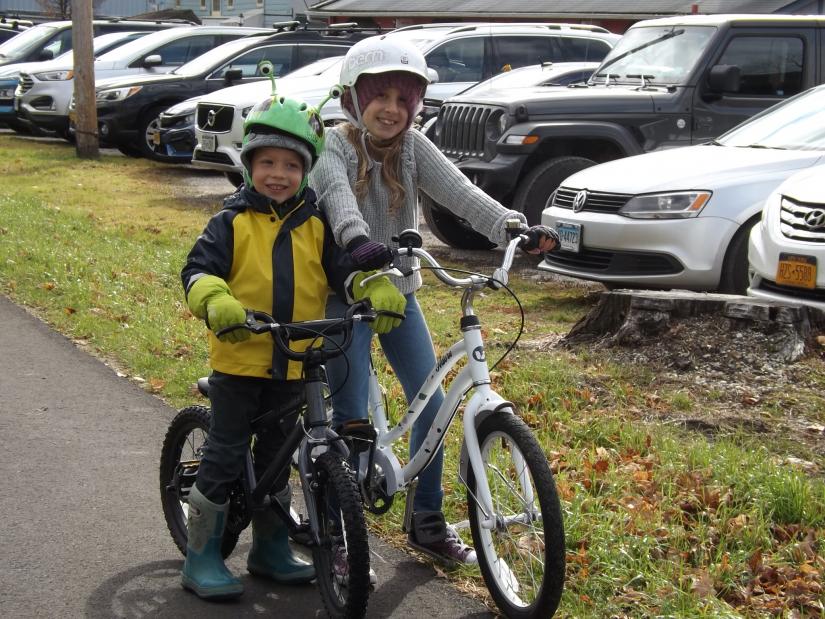 Cole Demuth, 6, and Lena Clanahan, 9, rode their bicycles side-by-side along the new north-bound section of the Harlem Valley Rail Trail leading from Main Street in Millerton to Beilke Road in Ancram. Photo by Kaitlin Lyle

MILLERTON — After 20 years, the Harlem Valley Rail Trail (HVRT), one of the region’s most popular recreational resources, now allows cyclists, walkers, runners, skaters and other trail goers to head north on the new extension, which stretches from Main Street in Millerton to Beilke Road in Ancram.

It all started with the railroad. The Trail’s website, www.hvrt.org, explains that the New York & Harlem Railroad originated in the 1830s as an early commuter railroad, linking lower Manhattan to the suburb of Harlem.

In the 1840s, the railroad extended northward into Westchester County, and by 1845, the New York State Legislature authorized further extension northward to connect with Albany.

At the time, an inland route up the Harlem Valley was chosen because it was easier and less costly to construct compared to a route following the Hudson River, according to the website. By 1852, the railroad was built north to Chatham, completing a line more than 125 miles from Manhattan.

In subsequent years, the upper portion of the New York & Harlem Railroad would become a secondary line in the Vanderbilt New York Central Railroad empire, which would later merge with the Pennsylvania Railroad to form a mega-railroad known as the Penn Central Corporation.

In the wake of its bankruptcy, the railroad’s management began cutting costs and abandoning thousands of miles of low-profit branch and secondary lines, including the Upper Harlem Line between Millerton and Chatham.

The Harlem Valley Rail Trail Association (HVRTA) explains a federal plan reorganized Penn Central into a down-sized Conrail System and eliminated the Harlem Line north of Millerton in 1976. The line was cut back farther south to Wassaic and then Dover Plains.

With New York State’s Metropolitan Transportation Authority (MTA) assuming responsibility for commuter services in 1972, the service district was extended back to Wassaic from Dover Plains in 2000; the Upper Harlem Line also received upgrades.

Harlem Valley Rail Trail Association Chairman Dick Hermans said it was during the 1970s that trucks were making a lot of the freight deliveries; the last items being delivered to Millerton via freight were pet food and propane.

Why the rail bed was saved

Hermans said it was thought that making use of the linear corridor between the communities left behind from the railroads was a good idea so that, on some future date, a modern kind of train could perhaps return to the area. Once the corridor is gone, Hermans said, it would be hard to duplicate it.

More than just a place saver, the trail is also an enormously popular free recreational resource. Hermans said he believes it has proven its worth to the region. Eventually the trail will cover 23 miles, from the Metro-North Wassaic Train Station in Amenia to the Copake Falls area of Taconic State Park.

While there are still many miles to go before the project is completed in full, community members and leaders were excited nonetheless by the news of the northbound section opening for public use.

“Our patience will be rewarded,” said North East town Supervisor Chris Kennan in a recent newsletter. “It’s going to be a stunningly beautiful asset to our already very beautiful part of the world.”

Hermans said, “I’ve been waiting a long time for this.”

When the project began in 2000, the HVRTA’s hope was always to extend it north.

“Little did anybody know it would take 20 years,” Hermans commented. “But here we are.”

The HVRTA is currently raising funds for a matching grant to build a trail linking Black Grocery Road in Copake and Orphan Farm Meadow in Copake Falls, totaling 4.9 miles at a likely cost of $2.4 million.

Hermans said the group is also working on a Bridge to Nature project over Webatuck Creek in Millerton, which will serve as an outdoor educational project to give trail visitors a deeper understanding of all they see when they’re on the trail and the impacts that humans have on the natural world.

Additionally, the HVRTA is still trying to raise funds to install a pedestrian bridge in Hillsdale; at this time, it has $75,000 pledged and is looking to match that with another $75,000.

Looking ahead, the HVRTA will seek bids for the construction of the bridge project in the spring. With any luck and no stumbling blocks, that section should be built next year.