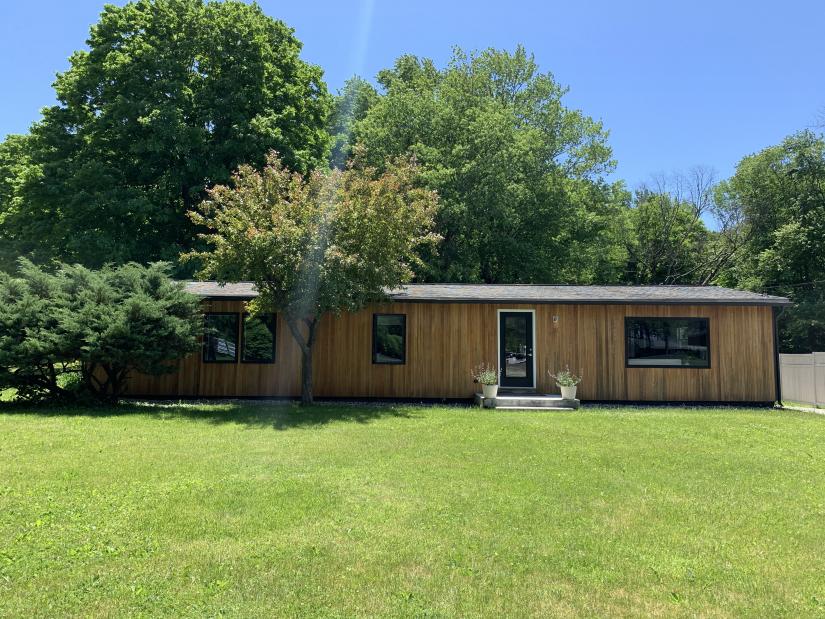 Alyssa Dingwall and Harris Freedman bought a second home at 74 Beilke Road in Millerton to ride out the COVID-19 pandemic and escape their Brooklyn apartment, which is something of a recent trend, according to Westchester County Realtor Hope Stone, who grew up in nearby Sharon, Conn. Photo by Hope Stone

From Brooklyn to Millerton: Pandemic causes New Yorkers’ exodus from city to the country

MILLERTON — A young couple from Brooklyn decided they wanted a place to escape it all — including life in quarantine during the COVID-19 pandemic in their Brooklyn apartment — so they just bought a second home in the northeastern Dutchess County village of Millerton. Perfect, they said, just what they were hoping for to ride out the storm.

And, as it turns out, it was just what plenty of other potential home buyers were hoping for as well, as more than 10 would-be buyers were lined up to look at the property on its first day being shown. But Alyssa Dingwall and Harris Freedman, the married couple that bought the home on Beilke Road, were the first ones to view it. They made an offer on the spot. The offer was accepted by the seller, and presto, another country house was sold by Realtor Hope Stone of The Julia Brasesco Team, which is affiliated with Compass Real Estate, which just opened an office in the village of Millbrook. Stone said she sometimes works with Realtor James Augustine in the Millbrook office.

Stone, who lives and works out of Rye Brook, in Westchester County, these days, grew up in Sharon, Conn., so she knows the Tri-state region well. She said this area is gaining in popularity, as many city dwellers are currently seeking second homes — some even primary residences — to escape the confines of urban life and the difficulties posed by living in isolation, cooped up for days on end in small apartments, dealing with subways, crowded city streets and stores (many still unopened), little green space and now, thousands protesting.

The exodus out of Manhattan and into the country is the current market trend, said Stone.

“I’ve seen so much activity,” she said. “That specific house I mentioned, we just went into contract with my clients; we gave an acceptable offer 24 hours after it was listed on the market. We were the first ones to see it. It was really crazy. We drove up there the next day after we saw it online. They loved it; they put in a full-ask offer. There were 10 people the next day who were supposed to see it who didn’t get a chance. That is unheard of up in that area — very unusual.”

Stone said she’s now getting requests to see country homes, many in northeastern Dutchess County, at least five times a week since the coronavirus pandemic.

“It’s really pushed things up a notch,” she said. “I’m getting requests left and right for country houses; people are dying to be up there right now, in that general region.”

She said Millerton “has a lot of qualities the young buyer wants: a cute downtown with a young country vibe.”

Growing up in nearby Sharon, she appreciates that “privacy has a lot” to do with the area’s appeal.

“It’s quiet, peaceful, serene. There’s so much to offer: hiking trails, things to do outside, people are really craving that in this climate we’re in right now,” she said. “Plus you have the train, which is nice.”

It’s the best of both worlds, said the Realtor.

“It’s very easy to market Millerton as a second-home away from your city home,” Stone said. “That’s what happened with these guys. They loved it. Some of my clients really like Pawling, which is so different from Millerton, though not too far. It really depends. There are other towns, like Rhinebeck, that people like a lot. It depends on the buyer.”

Stone said city residents are buying upstate property as second homes, to either quarantine in during the remainder of the shutdown or perhaps to transition to full time after the pandemic ends. Many, she said, are trying to gauge where they’ll be in terms of their jobs in six months’ time. The health crisis has changed so much, she said, including the work place, as many employees have learned they can do their jobs remotely, some realizing they may not have to return to their offices at all, even after the health crisis clears.

“If they can go to working fully remote, they will, and in six months many New Yorkers will go to live in a remote area full time,” Stone predicted, adding that’s why those who can buy up property now are trying to do so. “I do think that once big companies decide it makes sense to not rent bigger commercial office spaces, and to have more workforce work from home, that will change what the buyer needs from home, and location and the commute won’t matter as much, so it will change.

“Before the pandemic, I would get a request for country houses in the [Tri-state] area not even once week,” she said. “It’s been a huge spike. This is the first time I’m taking serious buyers — pre-approved with the funds and the whereabouts to buy — and doing transactions up there. It’s just different; there’s a lot less volume than what we do down county. Before the pandemic time I’d get maybe two to three calls a month; now it’s crazy. Everybody wants to buy there. There’s not nearly enough inventory. The issue is we have these buyers ready and willing to go, but the houses are not what they want. If there was more inventory there would be more demand. Due to the lack of inventory there is not as much activity in terms of purchasing.”

The three bedroom, two bath ranch house that Dingwall and Freedman just bought in Millerton was “exactly what they wanted,” according to Stone, who said the sellers had gutted the original and executed a complete remodel. The 1,400-square foot 1973 home sold for the asking price of $345,000. If it weren’t for the pandemic, Stone said the home, which she described as “really nice,” likely would have sold for around $325,000, she said.

Stone added the coronavirus has caused home prices to spike between 10-15%. The listing agent in the deal was John Panzer, of Elyse Harney Real Estate.

“With the pandemic, there’s a tremendous amount of urgency,” said Stone. “I think it’s just making property values keep going up higher for sure… it’s going to do good things for the market, and for property values. It will be difficult when they try to appraise values four or five years from now; it will discredit value at a certain point… But I think [right now] it will help the economy tremendously.”

“The housing market faced an inventory shortage before the pandemic,” he announced. “Given that there are even fewer new listings during the pandemic, home sellers are taking a calm approach and appear unwilling to lower prices to attract buyers during the temporary disruptions to the economy.”

“The market has been on steroids since the pandemic… it’s definitely translating to smaller markets like Millerton. It’s only a short amount of time [before buyers] go north. The movement is going to happen,” she said. “We saw a similar trend, it was a horrible time, but when 9-11 happened. Everyone just left the city. It was similar to what’s happened now. People just keep going north, north, north. The most north people who left the city that I heard about was people going to Albany, or maybe the Catskills, they won’t go farther than that, but they’re definitely moving up north.”

Freedman, who said he’s looking forward to moving into his new village home with his wife, understands the desire to leave the city behind — especially at times as harrowing as these — and live in the country, even if only temporarily.

“Millerton has everything for the perfect country retreat,” he said, adding the whole experience of working with Stone and finding his new abode was a “pleasure.”