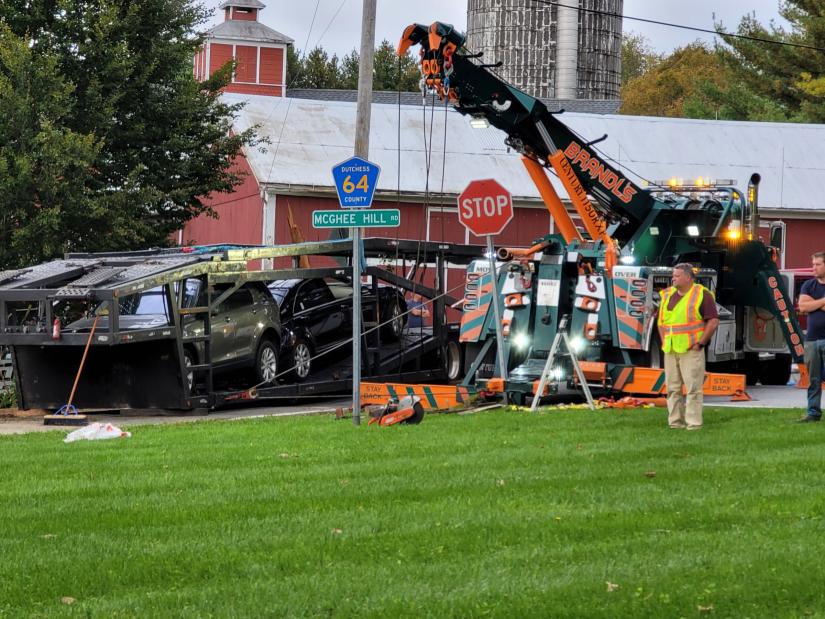 A tractor trailer carrying cars drove off the side of McGhee Hill Road in Millerton on Saturday, Oct. 9, causing a major response among local rescue departments. Photo by Judith O'Hara Balfe

NORTH EAST — Police and emergency personnel came out in what North East town Supervisor Chris Kennan described as a “massive response” on Saturday, Oct. 9, to McGhee Hill Road and Route 83 in the town of North East.

The Millerton Police Department (MPD) took the lead on the investigation. And although the Millerton Fire Company was the only fire department to respond, the Dutchess County Sheriff’s Office assisted at the scene, along with the Pine Plains Police Department and the Spill Response Team from the Department of Environmental Conservation (DEC).

A tractor trailer that was transporting cars on McGhee Hill Road, which Kennan said “is crazy” considering the design, curvature and steepness of the road, had trouble after his brakes failed and caused him to go off the side of the roadway.

The accident occurred at around 11 a.m., but according to MPD Officer-in-Charge Mike Veeder, Route 83 was closed “most of the day” and didn’t reopen until about 8 p.m.

Kennan said as far as large tractor trailers driving on McGhee Hill Road go, “I would not recommend it,” adding Saturday’s accident was “one of the worst I’ve seen since I’ve been supervisor.”

Veeder said that the tractor trailer “leaked quite a bit of fuel into the stream by the side of the road,” which was why the DEC Spill Response Team was called to evaluate the scene immediately and to try to protect the nearby waterway.

“They’re not always called in,” said Veeder, who added that the driver suffered minor injuries and was evaluated at a hospital and later released.

“He was lucky he could get out without major injuries,” added the police chief. “It could have been worse. I’m glad he could walk away from it.”