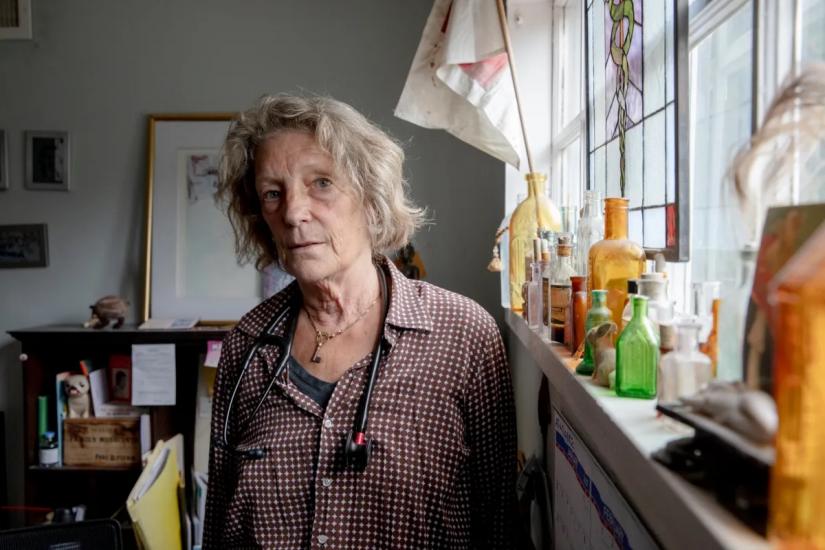 Dr. Kristie Schmidt stands in her office decorated with small bottles given to her by patients. Schmidt feels her patients appreciate the personalized experience she provides, but she questions whether this type of patient experience will continue to exist as private practices are joining big health care systems. YEHYUN KIM / CTMIRROR.ORG

Speaking with doctors who work for big hospitals, and asking if it’s good for patients

MILLERTON — In 1999, Kristie Schmidt, an internal medicine physician, opened a practice in Millerton, N.Y., just a mile from the Connecticut border.

The office was located in a cozy, refurbished barn. Sharon Hospital provided her with a loan, which it eventually forgave, to help her get up and running. Her small staff included her husband at the time, who managed the billing, and a nurse who doubled as the secretary and knew every patient by name.

But after about a decade, the challenges of running a small business came to a head.

“It became increasingly difficult to make an adequate living,” she said.

So in 2012, Schmidt joined a large group practice called Mid Hudson Medical Group. Under the agreement, Mid Hudson got a cut of what she made from patient visits. But, because of its size, the company was able to negotiate higher rates from insurers, so Schmidt still took home more than she did when practicing independently. Plus, Mid Hudson took over back-office tasks, like billing, that were taking up time and energy.

“My income went up some, and the hassle factor went way down,” said Schmidt. “It was a relief to not have to go broke.”

As the health care industry becomes more and more concentrated, some small private practices like Schmidt’s find it difficult to compete with big health care systems. So, instead, they’re joining them.

But, to the patient, does it really matter whether practices are owned independently or by a health system?

Hartford HealthCare officials highlighted a 2019 report, paid for by the American Hospital Association, an industry lobbying group, that argued that mergers are beneficial for patients.

But independent research shows that, as big hospital systems acquire more and more physician practices, patients end up paying more for the same level of care.

Schmidt’s practice is now part of Nuvance Health, a group of seven hospitals in Western Connecticut and the Hudson River Valley. In addition to working at her own practice, she also worked as a full attending physician at Sharon for a decade and is still on staff at the hospital.

She said that, in the time since she started her career, health care has suffered the same fate as retail, for example, where big businesses such as Amazon and Walmart have moved in and made it impossible for small players to survive.

She particularly worries about the impact of this trend on rural communities like hers, where delivering care may not be seen as profitable for big systems.

“My big concern is that when I first started here 22 years ago, there were 10 internal medicine doctors. Now, we’re down to four, and I’m the youngest,” said Schmidt, who is 61 and hopes to continue practicing until 70. “I just want health care in this community to continue to be available.”

The issue of hospitals swallowing up small private practices — often referred to as “vertical integration” — is playing out between two health systems in Hartford.

Saint Francis Hospital, owned by Trinity Health of New England, has filed a federal lawsuit alleging that Hartford HealthCare is pushing it out of the market by buying up doctors’ practices, particularly in lucrative specialties such as cardiology and orthopedics.

The lawsuit has garnered the attention of the Attorney General’s office.

“We are monitoring the suit against Hartford HealthCare and are aware of the serious allegations. We are also observing broader consolidation in the health care industry and are concerned about the possible impacts on patients and workers,” Attorney General William Tong wrote in an email.

Reports filed to the Office of Health Strategy show that, of the state’s large hospital systems, Hartford HealthCare has been acquiring physician practices most actively over the last several years.

Since 2015, Hartford HealthCare has acquired 14 practices and 59 doctors, according to publicly available notices of material change, which must be filed with the state to report “any transaction that results in a material change to the business or corporate structure of a group practice.”

Hartford HealthCare says its behavior does not qualify as “anti-competitive,” as the lawsuit claims. In a motion to dismiss the case, the corporation’s lawyers argued that Saint Francis, as part of a hospital chain much larger than HHC, should use its massive financial advantage to acquire and retain physicians, instead of trying to stifle competition.

“Hartford HealthCare and other competing systems in Connecticut have indeed successfully competed to recruit some physicians to their systems who formerly practiced at St. Francis. That leaves St. Francis with a choice. One option is to compete harder to recruit and retain physicians,” the motion states.

Trinity Health of New England has not acquired a single physician practice since 2015, according to reports filed with OHS.

In an emailed statement, a spokesperson for Trinity confirmed that Saint Francis has not acquired an entire physician practice over the last four years but has hired individual doctors as needed. Instead of competing for physicians by acquiring group practices, Saint Francis claims to bring in new talent by “ensuring we provide the highest quality of care ... attracting physicians to use Saint Francis to treat their patients most effectively.”

When doctors join big hospital groups, it drives up costs for patients in two ways, research has shown.

First, hospital systems are able to negotiate higher rates with insurance companies than private practices for the same level of care. So, when a practice gets acquired by a hospital system, its prices go up.

“The bigger the hospital market share, the more market power, the higher the prices,” said Meredith Rosenthal, the co-author of a May 2022 study documenting price increases at acquired physician practices in Massachusetts.

The second way vertical integration drives up prices is because acquired physicians are more likely to send their patients to hospitals within the system for follow-up services, like blood work, imaging and outpatient surgery. While this allows all of a patient’s records to stay within the system, these services tend to cost more at hospitals than they do at independent facilities.

“That change in referral patterns actually leads to a pretty sizable increase in prices,” said Christopher Whaley, a policy researcher with the RAND corporation who has studied the economic effects of vertical integration.

In 2021, Yale New Haven Health System and Yale Medicine, the group practice for physicians associated with Yale School of Medicine, had a combined total of more than 2,700 physicians. Hartford HealthCare had 973.

Together, the state’s five health systems account for more than a quarter of the around 17,000 physicians licensed to practice in the state.

Yale New Haven Health Senior Vice President Vincent Petrini rejected the notion that the system’s size or acquisitions would increase its prices. Medicare and Medicaid patients make up two-thirds of the system’s patients, which could be driving up the system’s prices for commercially insured patients, Petrini said.

“If costs increase over time, in large measure, it is because of the severe underpayments that we receive from government insured patients. Today our reimbursement for Medicaid is roughly 40% of the actual cost of providing care, and Medicare reimburses less than 90 cents on the dollar of actual costs,” Petrini said.

Research on the phenomenon of hospital “cost shifting” — increasing costs for private insurers as a result of decreases in the amount paid by public programs — suggests it doesn’t happen broadly.

One of the most widely cited studies on the subject, published in 2011, found that cost-shifting happened at “a very low rate” and concluded that “policymakers should view with a degree of skepticism most hospital and insurance industry claims of inevitable, large-scale cost shifting.” A more recent study published in 2021 reiterated that cost-shifting lacks empirical evidence.

Petrini added that many private practices do not accept Medicaid because of the low reimbursement levels. So, when a private practice joins a health system, it enables wider access for low-income patients.

In an emailed statement, a spokesperson for Hartford HealthCare stated that the system is “deeply committed to providing the highest quality care in the lowest cost-appropriate settings in order to ... effectively manage the cost of care.” In 2021, HHC moved over 50,000 surgical procedures from high-cost settings to lower cost ambulatory surgery centers. Its HHC-GoHealth Urgent Care centers also offer services at much lower costs than emergency rooms, according to the spokesperson.

Schmidt’s current employer, Nuvance, is the primary operator of hospitals in Western Connecticut and the bordering New York region. Though Schmidt is weary of big business in health care, she feels as if there aren’t many viable options outside of working for a corporation.

Private practices are facing unprecedented financial pressure, driving physicians, like Schmidt, to opt for the support a system can provide. And young doctors entering the profession are overwhelmingly choosing to work at hospitals instead of private practice, health care officials have said.

Nearly 40 years ago, Dr. Martin Keibel started Family Medicine Center in Manchester. In 2019, he and his partner joined Hartford HealthCare. Keibel described the move as vital to the survival of the practice.

“We realized that the external demands and pressures placed upon our practice made it necessary for us to have the much needed infrastructure and back-office support to remain a viable Family Medicine practice,” Keibel wrote in an emailed statement.

Joining Hartford HealthCare enabled them to make improvements, such as setting up an improved electronic medical record system and establishing quality assessments and improvement programs, that they found difficult to put in place as a small, independently owned shop, Keibel said.

And COVID only made life in private practice more difficult. The support of a large system made it easier to purchase PPE, get staff tested and get coverage for anyone who needed to quarantine. Between 2019 and 2021, the share of corporate-owned practices increased by 38%.

Schmidt still sees patients in that cozy barn in Millerton, N.Y. She’s been treating some folks for so long that they’ve become like family, she said.

Her practice routinely receives high patient satisfaction ratings, and Schmidt feels as if people appreciate the personalized experience she provides. But she worries about whether this type of experience can continue to exist, given the fundamental changes sweeping through the health care industry.

The Millerton News occasionally will offer articles from CTMirror.org, a source of nonprofit journalism and a partner with The Lakeville Journal Co..