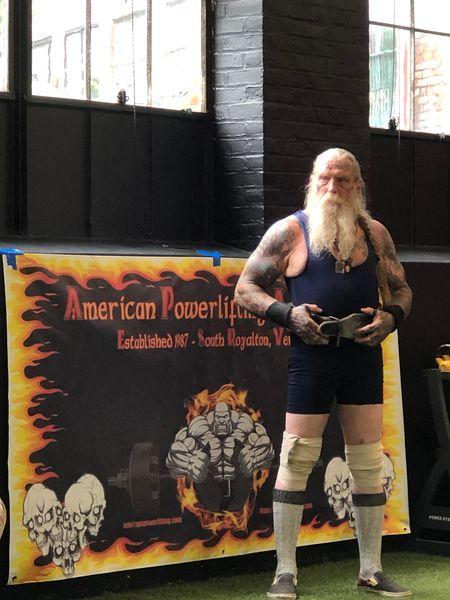 MILLERTON — When Boston Corner resident Mike Burch was growing up in the 50s in Albany, life was very different for him. He’s now 5-foot, 8-inches tall, 198-pounds and 72 years old. He has long white hair, peppered with a bit of gray typically tied in a pony tail in the back and grown in a long, chest-length beard in the front.

He no longer has to train with weights and take part in sports to strengthen his lungs due to his childhood asthma. Yet train with hundreds of pounds of weights each day he does.

That’s how this grandfather came to be the new record holder for the 70-to-74-year-old age group in the 198-pound weight class in the American Powerlifting Association’s (APA) National Championship competition on Saturday, May 28, at the Steel Beach Gym in Oakville, Conn.

The national APA competition marked the 35th anniversary of its founding in New England, which is why it was held in the Nutmeg State.

As the APA noted on its website, www.wpapowerlifting.com, “powerlifting is a strenuous athletic event.” The competition included three categories: squat attempts, bench presses and deadlifts.

Considering the septuagenarian is a grandfather of one and father of three, dead lifting nearly 500 pounds today is still pretty impressive.

“I have three kids and a grandson,” said Burch, clearly proud of his family. “I started all of my kids with weight lifting, my two sons and daughter. I started weight lifting when I was 2 years old because I had asthma and I guess the weights increased my lungs. I tell these young kid to start lifting weights all the time.”

Burch said his father, who did not himself train with weights, became his personal trainer when he was a child. None of his other relatives lifted weights, but Burch said his dad somehow knew the exercise regimen would help his breathing.

“My father recommended it for the asthma, and guided me when I was young,” remembered Burch. “He was good at training me. As a student, I became a top sprinter in New York State, and ran the 100-meter race in 9.8 seconds — that’s pretty good for an asthmatic.”

The U.S. champ said he “felt pretty good” about his transformation from sickly to superstar. As he grew older, Burch continued to train and make a name for himself on the weight-lifting circuit.

“I became state and national champion on the bench, and today my grandson trains with me. Eli is my training partner,” said Burch. “He really motivates me; he’s 16 and lives in Great Barrington, Mass., and he can really psych me up.”

For this year’s national APA title, Burch faced off against the former U.S.-record holder from Ukraine, who set the former record of 485 pounds in 2017.

While Burch could not explain why powerlifting has never made it to the Olympics, he said if it did, the U.S. would be assured a gold medal.

“It was never in the Olympics; I don’t know why. It should have been because the U.S. would dominate,” he said, noting athletes can partake for as long as their bodies hold out, and he would. “At 72, I would take part. Sure, why not?”