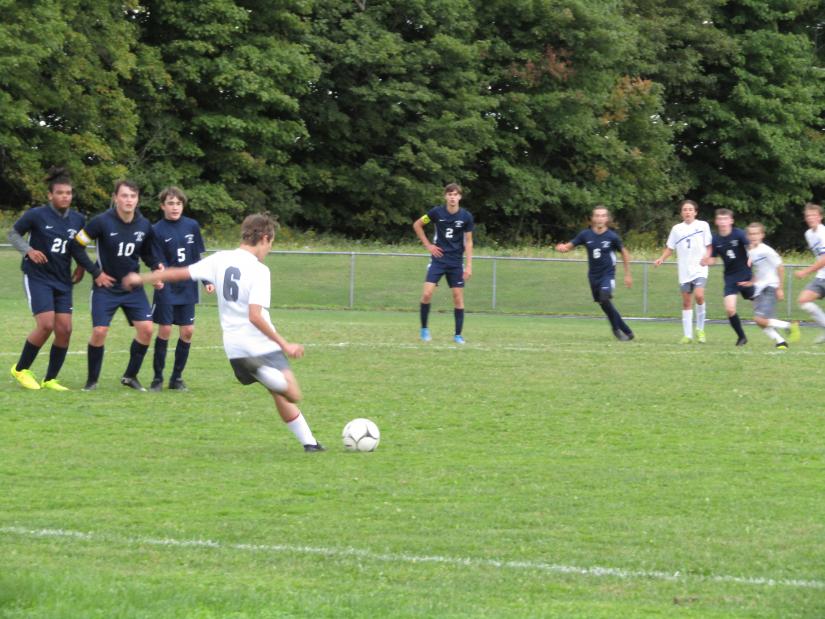 Under darkening skies, the Webutuck boys varsity soccer team fought to stay ahead of the Millbrook team on the field behind Webutuck High School during a home game held on Thursday, Sept. 30. Photo by Kaitlin Lyle

WEBUTUCK — Though their hearts were in the game and their eyes were on the ball, the Webutuck High School boys varsity soccer team met its defeat on home turf after competing against Millbrook High School on Thursday, Sept. 30.

Starting at 4:15 p.m., the Webutuck Warriors went up against the Millbrook Blazers on the field behind Webutuck High School.

Even as the skies overhead gave the impression a rainy evening was on the horizon, nothing could quell the teams’ desire to best their opponent on the field.

When matched against a strong local competitor like the Blazers, the Warriors were motivated to stay ahead of the game and keep control of the ball. Throughout the game, the teams put up a fierce fight to keep control of the field, using the best of their athletic abilities to keep their opponents on their toes.

Meanwhile, on the sidelines, fans kept their eyes on the field, watching the action unfold and reacting audibly to the players’ moves and missed opportunities.

Tyler Howard scored the Warriors’ first and only goal in the 14th minute of the first half.

By the second half, the Blazers caught up, adding goals to the scoreboard. Competing for Millbrook, David Sager, Thomas Pulhemus and Hayden Fox were among those who scored the Blazers’ five goals.

Millbrook left the field triumphant, with a score of 5-1 over Webutuck.

Asked about the Warriors’ progress on the field these last few weeks, Webutuck Coach Nicholas Barnes said, “We still have a lot of work to do if we want to compete against some of these teams.”