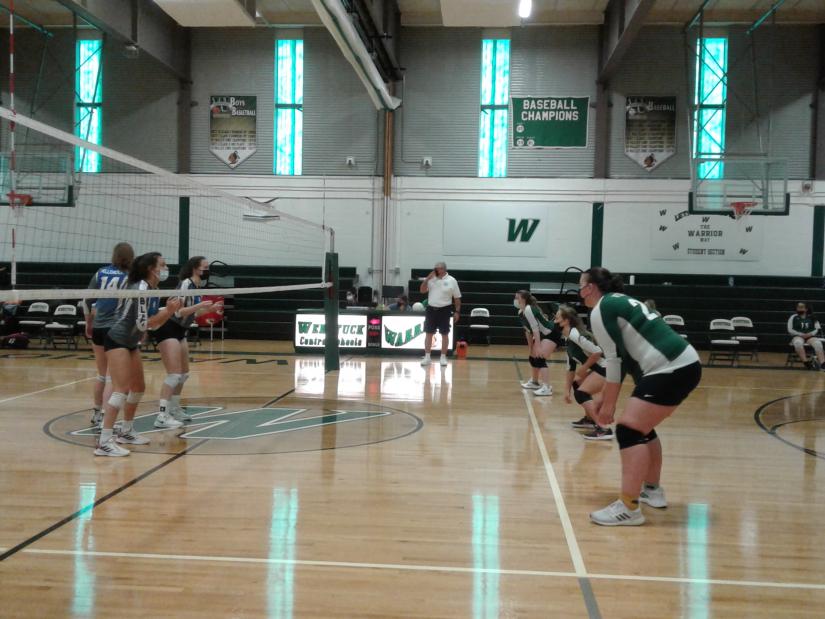 From the moment the volleyball was launched into the air, the Milbrook Blazers, on left, and the Webutuck Warriors put their talents into play as they competed against each other inside the Webutuck High School gymnasium on Thursday, Sept. 23. Photo by Kaitlin Lyle

WEBUTUCK — Working with a young team on the volleyball court this season, the Webutuck varsity volleyball coach is determined to build the program at all levels and make each game a learning experience, as was demonstrated on Thursday, Sept. 23, during their game against Millbrook.

“We’re very young, so [we’re] just working closely to really get them the basic skills they need, the positioning, the communication and the level to build up our program and have a successful volleyball program this year,” said Webutuck Varsity Volleyball Coach Lindsey Odell.

The Lady Warriors took on the Millbrook Blazers on the court of the Webutuck High School gymnasium, starting at 4:15 p.m.

A hush fell over the gymnasium as the crowd waited for the players to put the ball into play. Once it went soaring over the net, the gym echoed with the sound of rubber on the gym floors as players enthusiastically cheered each other on.

Pleased by the girls’ performance, Odell said, “They really came together as a team… and shined even when playing against a strong team.”

Competing for the Warriors, Chloe Larrabee, Devynne Gallagher and Kaylee Whitehead led the defense, putting up strong passes to create an opportunity to attack the ball, according to Odell.

Meanwhile, Casandra Crum led Webutuck’s offense by setting up crucial plays and was a consistent server for the team.

Both Chloe and Casandra were commended by Odell for being all-around strong players for Webutuck defensively and offensively as well as great leaders.

As a rookie volleyball player, Henrietta Gaeta stepped up on the court and was praised for doing a great job playing multiple positions for Webutuck.

“She is becoming quite the well-rounded player,” Odell said. “I am truly proud of the effort put forth by each player last night.”

“Millbrook is a powerhouse and it is always a pleasure to see the level of skill and talent they bring,” Odell marveled.

Though Webutuck ultimately lost to Millbrook with a final score of 0-3, Odell remarked that her team takes each game as a learning experience and heads right back to practice to continue growing.

“This team is definitely putting in the work and is highly motivated,” she said. “It’s great to see the improvement each game brings.”