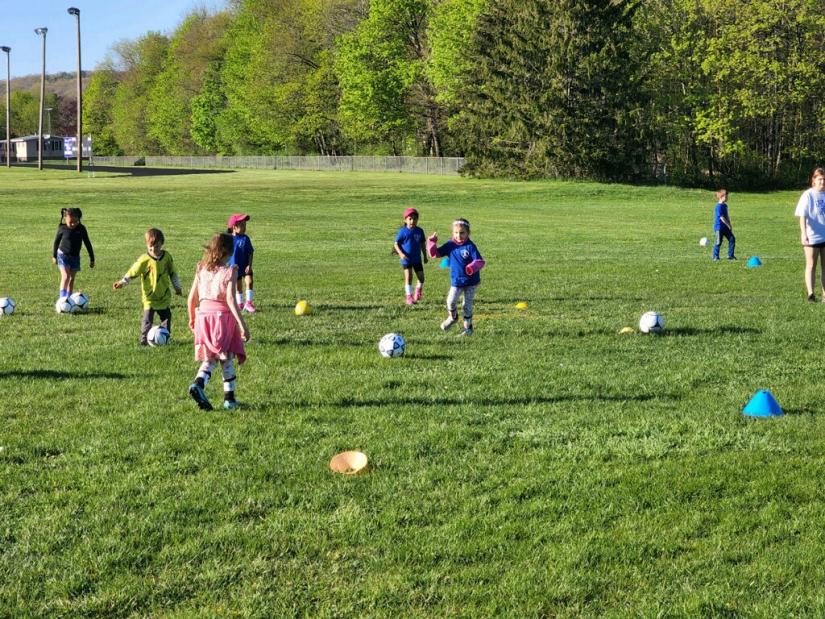 May 25, 2022
By
Kaitlin Lyle
kaitlinl@millertonnews.com

PINE PLAINS — While baseball is typically the starring sport of spring, the town of Pine Plains recently welcomed a new joint youth soccer program with the town of Stanford, dubbed the Stissing Mountain Football Club (SMFC). It kicked off on Monday, April 25, and will run through Saturday, June 18.

Noticing the absence of a youth soccer program in town, Wylie said, “I wanted to start it up so when kids get to high school, it’s not the first time they play soccer.”

Wylie explained the SMFC’s structure is very similar to the nearby town of Dover’s youth soccer league, Dover United Youth Soccer. Having worked for that league for five years, Wylie brought its blueprints with him to Pine Plains to help form the SMFC.

“The one thing that stands out is we’re making sure all our coaches are U.S. grass roots certified,” Wylie said, referring to the United States soccer initiative to teach soccer to young children and instill the values upheld at the professional level to the youth level early on.

Including Wylie, the SMFC currently has roughly nine coaches running the program.

Additionally, Wylie said many of his players from the high school girls varsity soccer team are assisting with the program. Wylie said his goal of blending young players with the varsity players is to create “this one unity of a team of players, because hopefully the players playing in this youth program will play for the school one day.”

Aside from the fundamentals, Wylie wants to instill teamwork, leadership and the rules of the game into those enrolled with the new soccer program. He also wants to teach the young athletes how to properly approach practicing and improve their game at both the individual and team levels.

By its first active week, the SMFC had 70 players enrolled — all from the Pine Plains Central School District, which includes nine towns in two counties.

Each age group has one practice and one game a week on the soccer fields behind Stissing Mountain Junior/Senior High School off Route 199 in Pine Plains.

Wylie said players ages 3 to 4 don’t have practice but have games early every Saturday morning.

Wylie said the teams on which the players compete rotate weekly “because we want to encourage that we’re one big program and you could be playing with any of these people at any time.”

Asked whether he foresees the Stissing Mountain Football Club becoming a yearly program in town, Wylie said “yes,” noting the intention is to offer eight-week sessions in the spring and fall for local children looking to learn the fundamentals of the sport.

Ideally it will become a town recreation program and, as it develops to the next level, a travel soccer program. Together, Wylie said he hopes there will ultimately be a town league and a travel league that will be able to play as one main club.

Practice and game schedules for the Stissing Mountain Football Club may be found online at www.stissingmtnfc.wixsite.com/stissingmtnfc.