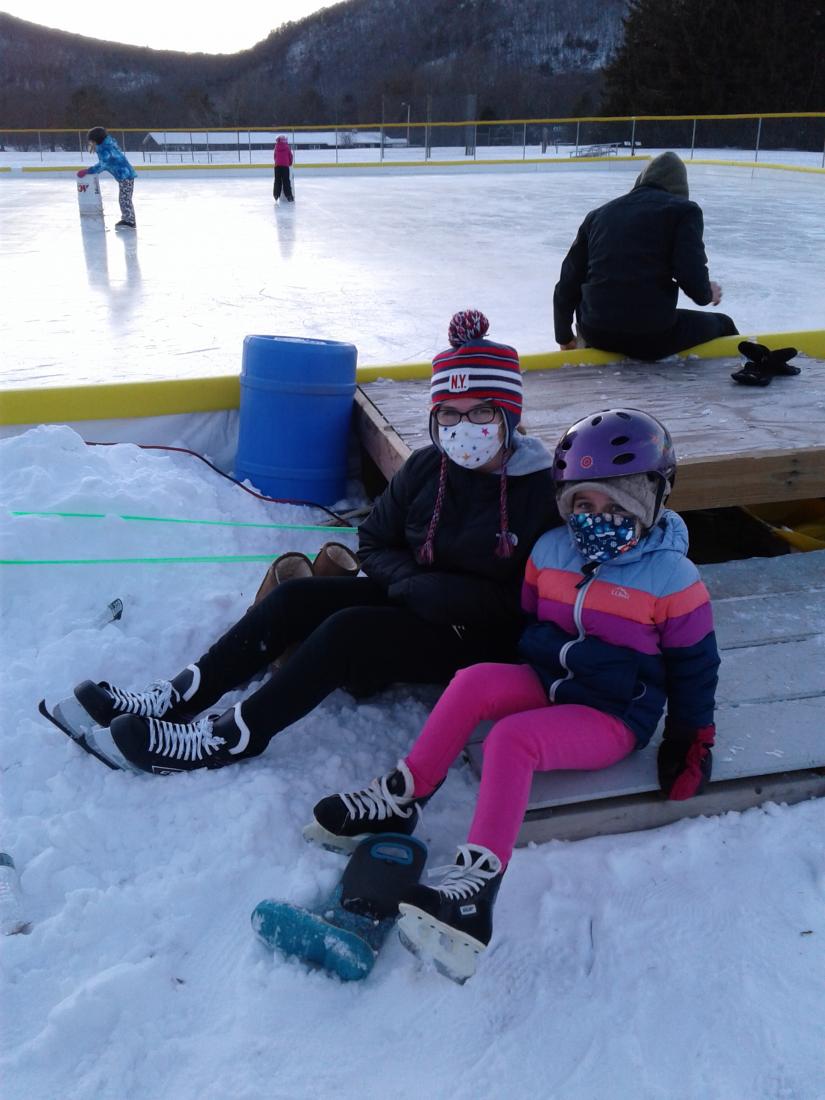 From left, sisters Caroline Pethic, 13, and Katherin, 6, of Red Hook,  laced up their skates before hitting the ice at the Pine Plains Ice Rink. Photo by Kaitlin Lyle

PINE PLAINS — After weeks spent waiting for the winter weather to hit the perfect temperature, the suspense paid off for area skaters as the town of Pine Plains officially opened its temporary outdoor ice rink to the public last month.

Though he was unsure of the exact date, Matthew Zick, a councilman on the Pine Plains Town Board and one of the board members who initially proposed the idea of a temporary ice rink, said it officially opened around the first week of January and was set up by himself and volunteers Rich Tamburrino and the Atkinson family. Located on Beach Road in the recreation fields behind the Pine Plains Lions Club Pavilion, this year marks the Pine Plains Ice Rink’s third year of operation.

Since the ice rink’s opening, Zick said the town has welcomed skaters not just from Pine Plains, but also from nearby towns including Red Hook, Poughkeepsie and others throughout the Hudson Valley as well as neighboring Connecticut. Indeed, skaters of all levels of experience have flocked to the outdoor rink in recent weeks, ready to embrace the exhilaration of gliding along the frigid ice.

Some have come to the rink with hockey sticks in hand, others have been content to practice their figure eights. For those who need a little help finding their balance, buckets are available for first-time skaters, especially the younger ones. As another safety measure, ice rink rules state that helmets must be worn at all times and skaters are there their own risk as no supervision is provided by the town.

Visiting the rink from Sharon, Conn., James Trivelli said, “They put a lot of time in this. It’s quite beautiful with Stissing Mountain — it’s the only place around to skate.”

As there’s no refrigeration involved, Zick said opening the rink is weather dependent. Looking out at the solid expanse of ice contained within the rink, he said that once the town gets a solid slat of ice like the one it now has, it can refinish the surface, which gives the town a chance to keep working on the ice to make sure it’s in top condition for skaters.

With Stissing Mountain in the background and wide fields of snow surrounding the site, skaters couldn’t ask for a more picturesque spot to put blade to ice, and the rink’s popularity has steadily grown in the last few weeks. Once the skaters hit the ice, it seems there’s no bringing them back to solid ground, even as the temperatures drop and the sun begins to set. In the evening hours, the town has been more than happy to encourage everyone to take advantage of the rink by turning on lights to illuminate their path around the ice.

Regarding this one-of-a-kind recreational resource in Pine Plains, Zick said, “It gets people to go outside and do an outdoor activity for free in the winter.”

When asked if he has any concerns about COVID-19 spreading and people keeping safe during the pandemic while on the ice, Zick remarked that everyone seems to be wearing masks and keeping a safe distance while skating.

For more information, go to the “Pine Plains Ice Rink” Facebook page for hours of operation and other updates.