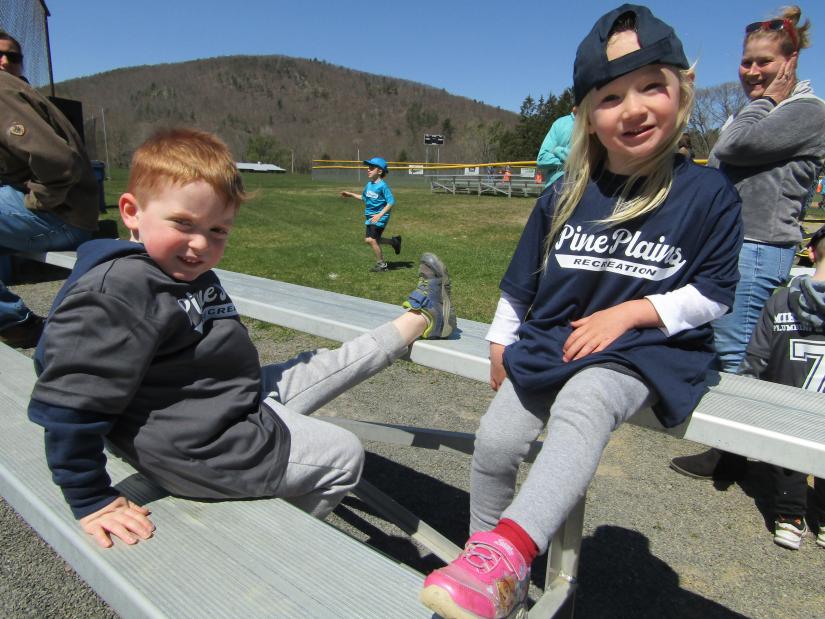 May 18, 2022
By
Kaitlin Lyle
kaitlinl@millertonnews.com

PINE PLAINS — Swinging into spring with baseball bats in hand, the Pine Plains youth baseball and softball teams saluted the start of their 2022 season with an Opening Day celebration held on Saturday, April 30.

According to Rich Tamburrino, liaison for the Pine Plains baseball program, this season drew a total of 178 players between the ages of 3 and 15. This season the league has five T-Ball teams, four Coach Pitch teams and five competitive teams.

Starting at 11 a.m., Pine Plains coaches, families and budding ballplayers had the perfect spring morning to kick off the 2022 baseball season on the Pine Plains Town Recreation Fields.

As they made their way over to the ballfields, players and their families were encouraged to stop at the registration table to see where their teams were gathering. A line formed in front of the baby blue building as players checked in and received their new uniforms.

While the future sports stars of tomorrow ran the bases with friends and practiced their pitches, the active boys and girls stopped at the face painting table to get their faces and arms decorated with colorful designs.

At Tamburrino’s request, the teams started heading over to the area’s main ball field and players merged in a rainbow of orange, navy, grey and otherwise colored uniforms.

Thanking everyone for their attendance, Tamburrino credited all of the parents and coaches for making the event possible. Noting all of the coaches are volunteers, he said, “This is where the magic starts.”

Along with thanking all the baseball families and local businesses for their team sponsorships, Tamburrino gave heartfelt thanks to all the sponsors and pointed out the banners that now line the fences along the fields. As a side note, he mentioned the movie “Rally Caps” was recently shot on the field and will debut in a year’s time. He explained that not only will the film’s shooting bring attention to Pine Plains’ baseball program, but “Rally Caps” also donated a banner that now hangs along the fence by center field.

“This wouldn’t happen without you parents,” Tamburrino said. “Thank you so much. Work with your players — they’ll be great players.”

Pine Plains town Supervisor Brian Walsh thanked all the volunteers for making the baseball and softball programs possible and toasted the start of a successful season.

“It’s a great day and it really is what makes dreams,” said Pine Plains resident and Chair of the Dutchess County Legislature Gregg Pulver (R-19).

Inviting the supervisor and legislator onto the pitcher’s mound, Tamburrino announced Walsh and Pulver would throw the first pitch. Though dressed formally in jackets and ties, both Walsh and Pulver threw with gusto.

Once a recording of the National Anthem was played and the 2022 season was properly toasted, players raced off the field to enjoy the face painting table, purchase food from the concession stand and celebrate the rest of the day with friends and family.