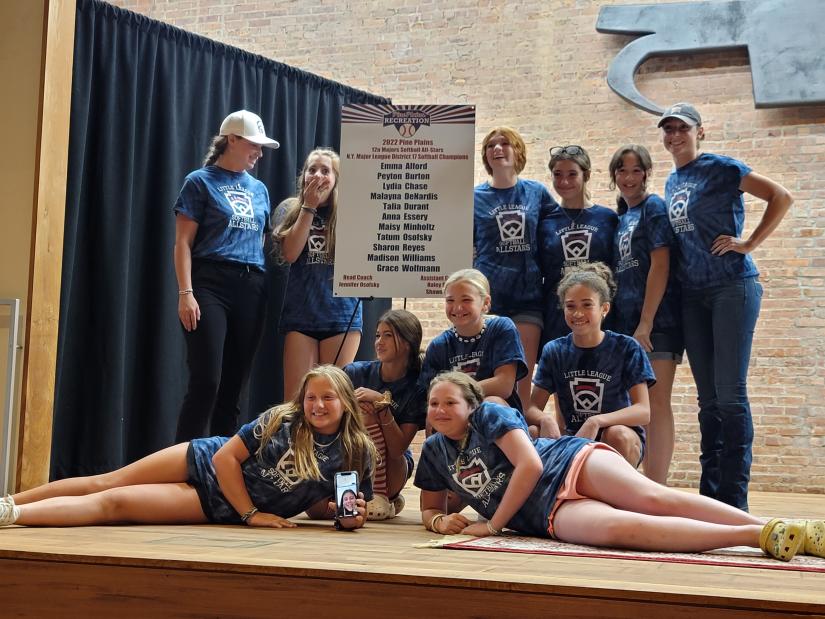 The Pine Plains Girls Softball team, made up entirely of sixth-graders, is this year’s New York Major League District 17 12u Champions. Above are the players, who gathered on Thursday, Aug. 11 at The Stissing Center in Pine Plains, flanked by Coach Jenn Osofsky on the left and Coach Haley Strang on the right, following the unveiling of a new sign in their honor to be hung at the town’s recreation fields. Photo by Judith O’Hara Balfe

PINE PLAINS — From the moment one meets the members of the state championship girls softball team from Pine Plains, two things stand out — they really love the game — and they really love each other.

The young players clearly also love the camaraderie, the teamwork and good sportsmanship. Those are just part of what helped the Pine Plains Youth Baseball/Softball Program create such an upbeat and successful team that won the New York State Little League District 17 12u Softball Championship this past spring.

The team’s impressive accomplishment was celebrated by the community-at-large on Thursday evening, Aug. 11, when many local fans and supporters gathered together along with the players, their friends and family, the league’s president and coaches, to witness the unveiling of a new sign in their honor.

The sign will be hung at the town’s recreation fields off of Beach Road.

League President Rich Tamburrino said the new metal sign will be hung at the softball field, which has never been done in the town and “is a big deal for the team and the community,” according to him.

As each player walked into the auditorium of The Stissing Center last week during the ceremony, she was greeted with a hug from her teammates.

The winning 12u team consists of all sixth-graders. Tamburrino said when announcing the event that he was extremely proud of the young athletes, adding they’re all deserving of the many accolades they’ve received since their victory.

Mistress of Ceremonies  was Heather Dell’Amore, a local mom, podcaster, Stissing Center Board member and coach for one of the younger softball teams. Dell’Amore also praised the team.

She told the girls their accomplishment is not just their own, but that they are role models for all of the younger girls who come behind them.

Dell’Amore thanked the players for their generosity in allowing younger softball teams in the league to join in some of their practices, and for sharing their expertise with them. She said the kindness and patience they’ve shown won’t soon be forgotten by the players who now look up to them as softball superheroes.

Pulver also congratulated the team during the ceremony. He referred to the possibility of upgrading the field, something he’s frequently aspired to through the years, starting from when he served as town supervisor up until his tenure with the County Legislature.

“The field should be as good as the players,” he remarked. “This is only the beginning.”

Pulver also spoke about what the 12u team’s win meant for the town of Pine Plains and to its residents, and of the pride it’s instilled in the community.

Walsh reiterated the promise of better playing fields, which is an issue he’s been busy working on with the Town Board.

“Things are getting checked off and everything will fall into place,” said the town supervisor, who said he plans for the town to build a dugout for the softball field, which has never had dugouts — unlike the baseball field. Walsh also spoke about the possibility of getting lights installed for night games.

Both Walsh and Pulver said the softball players and their championship win has made them proud.

While congratulating the team, Tamburrino said it couldn’t have been done without the support of staff, family and the team’s many local sponsors.

In a play-by-play narrative of the final game, during which it became too dark to play, forcing the team had to finish the final two innings the following day after a night of torrential rain, it became evident the championship was hard-won and well-deserved.

After Tamburrino spoke, Dell’Amore called each player up by name, presented certificates and bouquets of flowers. The one player who could not attend was still included in the ceremony, as the team texted her a group photo taken that evening, allowing her to be present virtually — another testament to their closeness.

Afterward, a feast awaited the girls and their guests, along with music and  chatter. To no one’s surprise and keeping true to form, the team ended up on the stage dancing as one — always having fun, always preferring to be together.