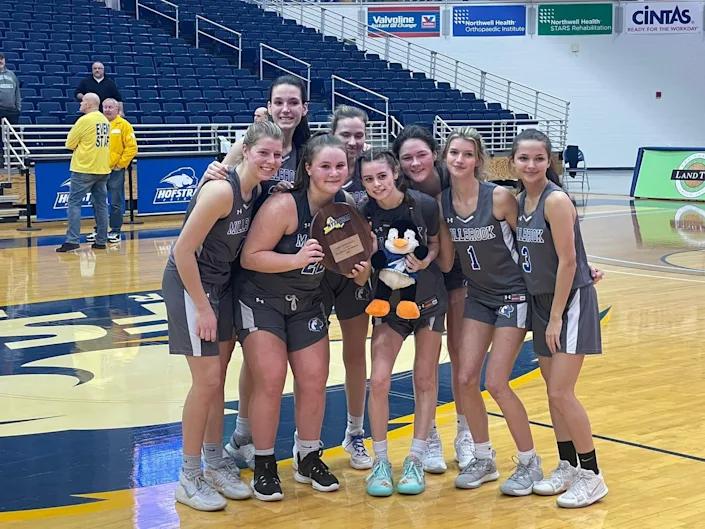 Millbrook Athletic Director Alfred Hammell said he is extremely proud of the Millbrook Blazers Girls Basketball Team for beating the Carle Place Frogs and making it all the way to the semi-finals in the state championships, which will be played against  East Rochester on Saturday, March 19, at 9 a.m. at Hudson Valley Community College in Troy. Photo by Alred Hammell

MILLBROOK — Following a two-year hiatus due to the COVID-19 pandemic, the Millbrook Blazers Varsity Girls Basketball Team sprang back into action with a winning season. The girls competed in an important match on Saturday, March 12, as they chased the state championship title.

The Millbrook High School Blazers easily leaped over the Long Island’s Carle Place Frogs (Section VIII) with a score of 51-43 in the Class C Regional Finals. The game was held at Hofstra University on Long Island.

The snowstorm outside did not deter the players on the court, and thankfully the team had booked their hotel for Friday night near the university before the flakes began to fly. After two years of missing out on a chance to play for the championship, the Millbrook athletes weren’t taking any chances.

Blazers Head Coach Adam Peek said he was personally thrilled, and happy for his players. He said he is fortunate to have such a great group of girls play for the team.

By half time the score was tied at 20-20 — the game could have gone either way.

Carle Place, formerly a Class B team, is known for its excellence and was a fierce competitor for the Millbrook players.

Going into the fourth quarter, the Blazers were leading by two, 35-33. Madison Harkenrider had 12 points and five assists, while Natalie Fox had 11 points, 13 rebounds and four blocks to ensure Carle Place’s defeat.

The Blazers now have an impressive record of four consecutive Section IX titles.

The Blazers have a season record of 21-3, and will next compete in the state semi-finals against East Rochester (Section V) on Saturday, March 19, at 9 a.m. at Hudson Valley Community College in Troy.

Rest assured that all of Millbrook, and the Harlem Valley, will be rooting for the Blazers to bring that state championship title home.