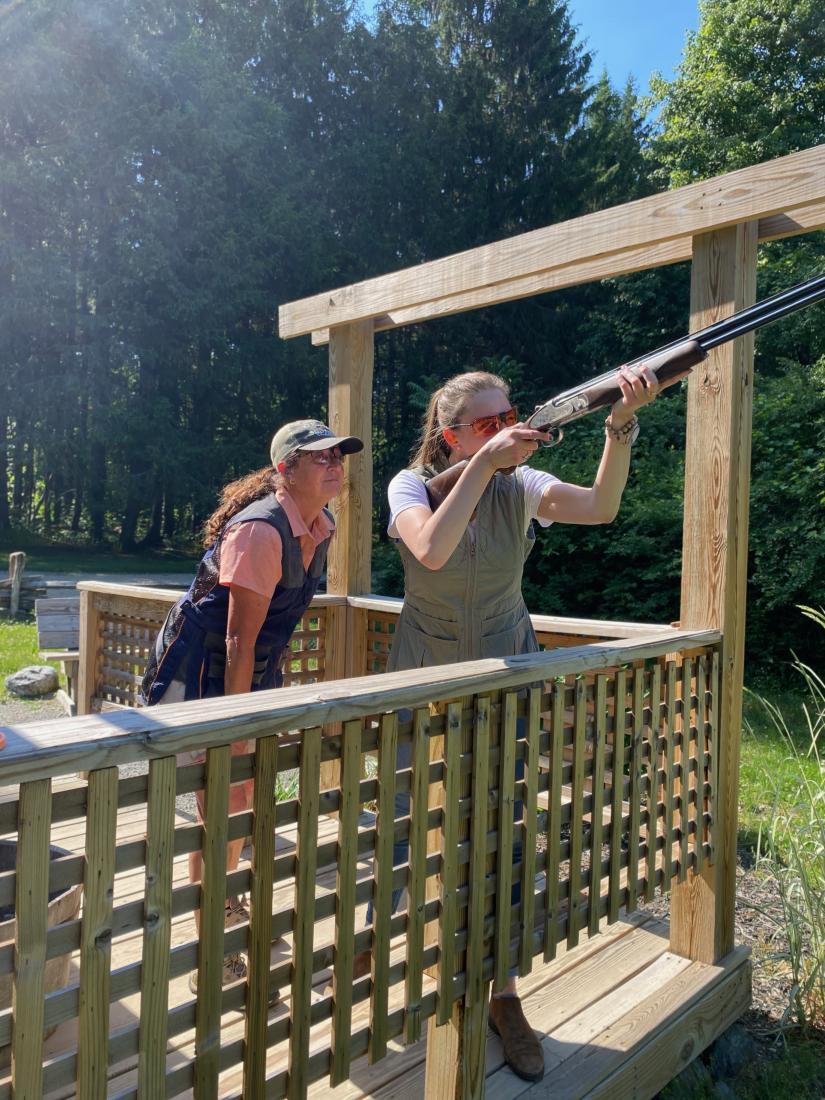 Shooting instructor Paula Moore, left,  joined Orvis Sandanona in June, when the Millbrook shooting grounds re-opened amid the coronavirus pandemic. Here she is watching the form of student Felicia Mohr while she practiced her shooting. Photo by Judith O’Hara Balfe

MILLBROOK — Paula Moore had a satisfying career showing horses, something that she loved to do. But accompanying her husband to a sporting clays shooting program one day eventually changed her life, and her career, which is why she is now the newest shooting instructor at Orvis Sandanona shooting grounds in Millbrook.

Born in Sheffield, Mass., and raised with three brothers, Moore said she has  always loved competing, showing horses and shooting. Once she got into shooting, she trained extensively and she said she learned from some of the top shooting instructors in the United States as well as from experts in Europe.

After learning her craft, she started competing regularly, and for more than 20 years she has been a fierce competitor. As a five-year member of Team USA, she competed five times in international competitions. She was with the team for eight years. Moore’s major accomplishments include being a nine-time National Sporting Clays Association (NSCA) All American; a five-time member of Team USA; a three-time  World Side-By-Side Champion; a six-time New York State Champion; and a three-time Zone 1 Champion.

After years of competing, Moore became a NSCA certified instructor, starting her own business and instructing students of all levels. She did this part time for three years while working as an emergency veterinarian technician. Moore then retired from being a vet tech and went into teaching full time and opening up  Moore’s Broken Clays in nearby Red Hook.

Her business venture took off, which meant constantly looking for new clients, marketing herself, scheduling appointments, bookkeeping and keeping up with all of the other responsibilities that come with business ownership.

When she learned there was an opening for a shooting instructor at Orvis, however, she thought long and hard about making a change. As much as she loved having her own business, she weighed the pros and cons of doing all of the work to keep the business operating — in addition to shooting — which is where her heart is. When Orvis made her an offer, Moore accepted. Shortly thereafter, the country was hit with COVID-19 and her facility closed, but not before she realized the Orvis job would be a good fit, and that she and her expertise had found a good home.

Female shooting instructors are not all that common, but Moore said that those who know her are not surprised that she gave up horses for shooting, given her competitive nature. Some others are surprised, and  it is not terribly unusual for men to tell her that they’d like her “to work with their wife,” she said.

“Shooting is not gender specific, but we have to work twice as hard as a man,” said Moore.

Although most events at Orvis have been canceled or postponed during the pandemic, as the state opens up, sporting events are starting to take place again. Orvis held a women’s shooting clinic in June and a youth clinic was scheduled in July. The Orvis website, www.orvis.com, offers more information on upcoming events.

Orvis Sandanona, at 3047 Sharon Road, is a vital part of Millbrook’s culture, bringing thousands to their two-day Orvis Game Fair each year. They offer sporting clays, wing shooting, fly fishing, lessons and workshops as well as offering excellent food, fine clothing and accessories, all nestled in a beautiful area of woods, streams and rolling green hills.