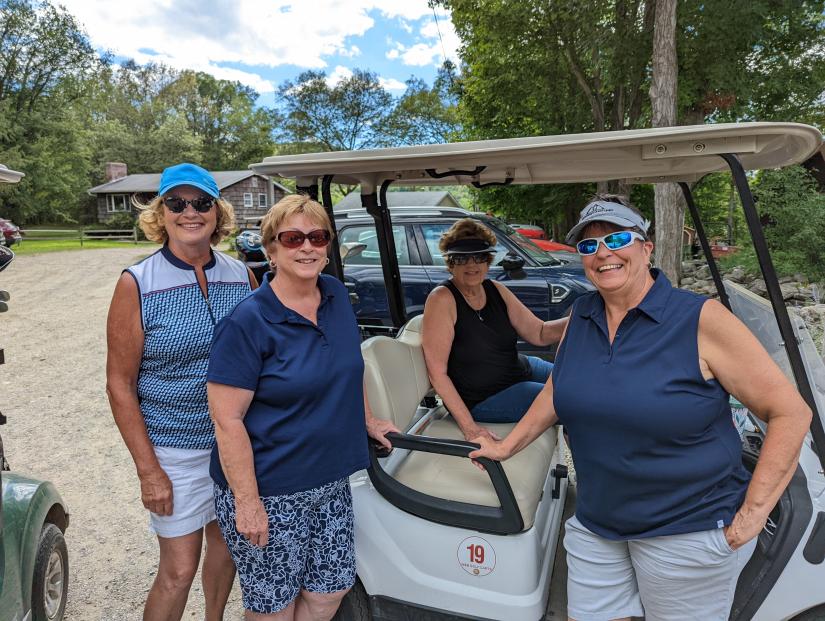 Friendly competition brought, from left, Lana Morrison, Carol Dean, Pam Malarchuk and Dara Simmons together for the Second Annual Battle of the Books Benefit Scramble at the Undermountain Golf Course in Copake on Saturday, July 30. Photo by Rhiannon Leo-Jameson

Millerton vs. Amenia at Undermountain

COPAKE — Saturday, July 30, was a big day for Millerton and Amenia golfing bibliophiles who took a swing at bringing home some cold hard cash, as well as a shining trophy to their favorite libraries.

For the second year of the Battle of the Books Benefit Scramble, held at Undermountain Golf Course at 274 Under Mountain Road in Copake, bragging rights went to the Millerton team. The NorthEast-Millerton Library (NEML) ended the day with a win of 89 to 97, much to the delight of NEML Director Rhiannon Leo-Jameson, who was quick to note that the day really was about getting together and having a good time.

Course owner and manager Patricia MacArthur made sure that happened, according to Leo-Jameson.

“We all appreciate how generous and kind the folks at Undermountain have been,” she said. “It is an actual pleasure to work with them.”

Undermountain provided hungry golfers with a much-appreciated dinner of hamburgers and hotdogs as well as clubhouse gift certificates to the following winners: John and Julie O’Connell with a score of 29; Greg Snyder and Sarah MacArthur at 30; and Dave and Alan Gamble at 31. Pam Malarchuck and Jeff Anderson won closest to the hole.

Leo-Jameson said that last year she and Amenia Free Library Director Victoria Herow saw what a good time everyone had and so decided this year to throw their hats in the ring by joining in, while being patiently mentored in their round by Brad and Andrew Rebillard.

Both librarians said they were taken by the game.

“This was my first time — except for miniature golf,” Leo-Jameson said with enthusiasm. “It was fun to be out in nature and have something to do. It’s not too strenuous, but there is thought behind it. You’re trying to figure out the lay of the land and the best place to hit the ball.”

With a laugh, she explained they plan to hold the competition and play again next year.

“I may even take lessons,” she concluded.

Despite morning clouds, the event took place under perfect blue skies, unlike last year’s first annual tournament. In 2021, golfers struggled with temperatures well into the 90s.

Whatever the weather, Leo-Jameson said the event allowed the two libraries to split the more than $1,000 raised. It’s one of several ways in which area libraries cooperate in order to do their best for their patrons.

Interlibrary loans, which have been available since they were first implemented through use of the postal service, are now a major aspect of circulation. Libraries frequently share material, which is now delivered quickly by a courier service responding to orders placed online.

Costs are shared to allow for programs — particularly for children — a practice that was especially helpful during the early days of the COVID-19 pandemic.

Shared data bases such as the hugely popular Mango and the much-used eBook content are also made affordable.

Now that this year’s tournament is complete, the one thing that the two libraries won’t share is the coveted trophy — which was immediately returned to the Millerton mantle where Leo-Jameson said for the past year it served as a reminder “of a good time we had together for a good cause.”