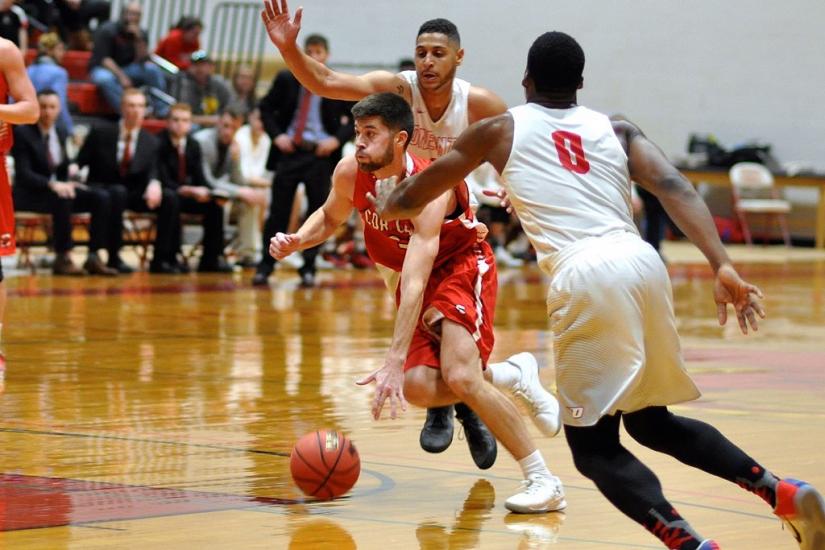 For all four years of his collegiate career, Justin Cooper of Pine Plains competed as a high-scoring player on the SUNY Cortland basketball team, and his hard work was recognized in February when he was chosen for the State University of New York Athletic Conference Men’s Basketball All-Decade Team. Cooper is now a basketball coach at his alma mater, Stissing Mountain Junior/Senior High School. Photo submitted

PINE PLAINS — Almost a decade since he competed as a student athlete for the Pine Plains Central School District, Justin Cooper, 25, has returned to  his alma mater, Stissing Mountain Junior/Senior High School, this time as a coach for the varsity boys basketball team and as an honoree of the State University of New York Athletic Conference (SUNYAC) Men’s Basketball All-Decade Team.

Identifying himself as “a pretty competitive person,” Cooper remarked that basketball has been a good sport for his competitive nature. A lifelong resident of Pine Plains, Cooper’s basketball career began when he was just a tot with the Pine Plains Pee Wee Basketball League and followed him into high school, where he played at the varsity level for all four years before heading off to college.

Following his graduation from Stissing Mountain in 2013, Cooper completed a post-graduate year at Trinity-Pawling School in Pawling, before continuing his education at SUNY Cortland. Along with pursuing a major in sports management, he competed on the college’s basketball team for all four years.

Among the highlights of his career at Cortland as noted in a press release from the state college, Cooper competed in the guard position for four seasons from 2015 to 2019 and ranked first at Cortland in career free throws made and in free throw percentages. He also recorded 28 career double-doubles, according to www.jr.nba.com, and helped his team win the SUNYAC title and advance to the National Collegiate Athletic Association second round during his freshman year. Looking at an array of impressive career statistics, Cooper scored a total of 1,378 points (averaging 14.8 points per game), 751 rebounds, 272 assists, 104 steals and 85 three-pointers.

The colleges nominated players for the All-Decade Teams, which consist of 15 players each and mirror the size of annual all-conference teams, though they’re not broken down by position. To be eligible, players needed to have played at least one season between 2009-10 and 2018-19 and must have either been named All-SUNYAC at least twice or a SUNYAC Player of the Year once.

“It means a lot — it shows that the hard work I put in is recognized and it also shows that I had some really good teammates that supported me and worked hard with me,” Cooper said. “It’s an honor to have post-graduation recognition.”

Following his graduation from Cortland in the spring of 2019, Cooper began operating his own basketball skills company, LMC Athletics, with one of his former Bomber teammates and Pine Plains buddies, Tyler Lydon, who eventually made it all the way to the NBA. Continuing to stay involved with the game, Cooper said he’s more of a coach now than a player, adding that “as you get a little bit older, there’s less playing and more teaching.”

Between coaching the Stissing Mountain varsity boys basketball team and running clinics, camps, individual and small group training offered through LMC Athletics, Cooper said he tries to share some of the things he went through as a player with the players he’s now molding. He remarked that his past experiences help him relate to those players, and while COVID-19 has created a unique time for sports, the game has remained the same and he’s determined to give his players the best experience given the circumstances.

Regarding his return to his hometown to now be a coach, Cooper said, “It’s great. It’s a really nice experience to be back here and coach and help these kids get better and help them reach their goals, and it’s always unique to coach on the court I once played on.”