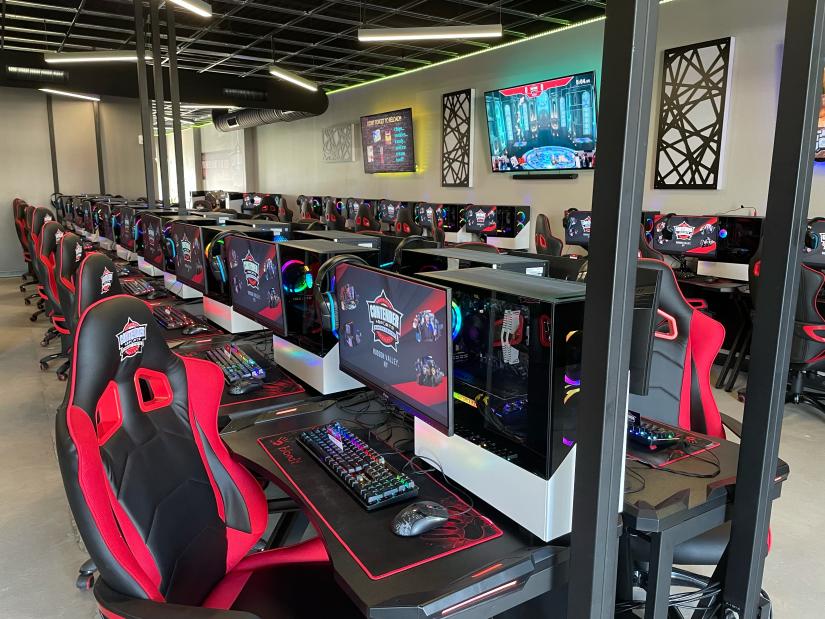 Above is the Contender Esports Hudson Valley gaming center in Wappingers Falls, where Dutchess County students practice twice per week and have weekly tournaments with other schools in non-traditional eSports. Photo submitted

DUTCHESS COUNTY — School sports have be on the decline since the COVID-19 pandemic and due to a shrinking student enrollment, according to local athletic directors. It’s caused some schools in Dutchess County to merge various athletic teams in an effort to let student athletes keep playing the sports they love.

Another challenge? Some long-popular sports have lost their popularity or are now deemed too dangerous to play. Football is one example, with parents concerned about concussions and other injuries.

Of course, some students simply are not athletically inclined, but still like games and being competitive.

The solution? Esports, courtesy of the Board of Cooperative Educational Service (BOCES). Five Dutchess County school districts are now involved in this new program for the spring 2022 semester, including in the Harlem Valley.

Along with districts such as Arlington — always known for its athletics,  Millbrook and Webutuck are involved, plus Beacon and  John Jay-Ketchum.

“We are pleased to be able to offer this popular activity in support of STEAM, computer science and other academic areas,” said Director of Educational Resources at BOCES Jenny Schinella. “Originally, the plan was to offer it in fall, 2022,” but as multiple districts were interested, Esports began this spring.

Working with Contender Esports Gaming Center on Route 9 in Wappingers Falls, the gaming started in February. Teams with up to 20 players compete; they practice once weekly at the sports center and compete on Saturdays.

The games are played at the top-level video gaming and Esports facility, which has 50 gaming stations, with consoles and PCs. The business is owned by Deanna Fine, president of the company.

“I am very excited to be the Esports coach of the inaugural season here at Arlington High School,” Ziemins said. “It comes down to teamwork, great communication skills, receiving and giving clear instruction, developing team strategies and most importantly having fun and supporting each other, win or lose.”

Ziemins added that unlike traditional sports, Esports is “inclusive to anyone and allows any student who is interested to join.”

Some have been reticent about the program, concerned it could prevent students from participating in traditional sports, exercising and getting outdoors, and that today’s teens spend too much time on computers already. Plus, it’s already challenging to put a full team together for traditional sports due to diminishing enrollment numbers and low interest.

In fact, some schools have had to share players, such as Millbrook and Dover, to create a single merged football team.

Another question arose about whether this should be considered a club or a sport.

In the Millbrook Central School District, a questionnaire asked students how they feel about Esports.

There were 37 responses, with 28 students showing an interest in joining. The district easily filled spots when the Esports program began, which has a 10-week season.

Many Millbrook students already game; now they practice and are coached at school during the week, plus practice and compete in Wappingers.  So far the response has been very positive there.

“I’m thrilled that our Board of Education approved Esports at our meeting [on Feb. 22]. By creating a competitive Esports team, our students can connect their gaming passion with their academic and personal goals,” said Millbrook High School Principal Eric Seipp. “Esports is gender inclusive, although at this point limited to the high school students.”

Seipp added unlike traditional sports, Esports reaches out to everyone, one reason he’s a major proponent of it.

“It is my hope that providing students Esports will be a platform to teach vital skills such as teamwork, decision making and the ability for students to think on their own,” he said. “We are beyond excited to offer this opportunity to our students.”

The season costs about $2,000 for Millbrook to fund, plus costs to pay the coach (usually from the IT department) and transportation fees.