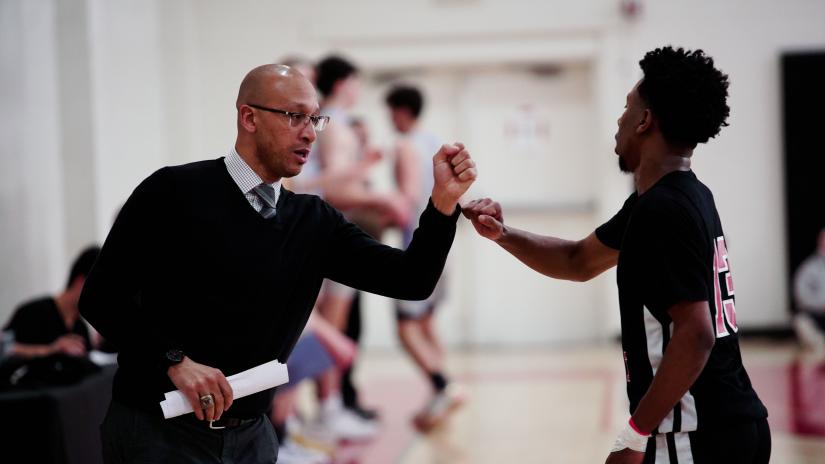 Coach Raphael Chillious subs out Dylan Edwards, a senior, during the last home game of the year for the South Kent Cardinals. Photo by Hunter O. Lyle

KENT — After years of coaching at elite schools like Villanova University and the University of Connecticut, Raphael Chillious, who built a program that has since produced national rankings and National Basketball Association (NBA) All-Stars, is back at the helm of South Kent School basketball.

Even during his formative years with basketball, Chillious knew he was interested in more than just playing. In fact, while playing at Lafayette College, Chillious was able to coach his former high school team.

“Every coach I played for always said, ‘You’re going to be a coach’,” Chillious said. “I always knew the game better than I could play it. I always took a deeper interest in more than just showing up to practice. I wanted to know everything I could about the game.”

Chillious had his first opportunity as a coach at the University of Victoria in Victoria, British Columbia in Canada. At the time, Chillious was a graduate assistant coach under the prolific Canadian coach Guy Vetrie, who had just won the 1997 Canadian Intercollege Sport (CIS) National Championship.

“We were warming up for a preseason game and the game is about to start, and [Vetrie] is sitting in the bleachers,” said Chillious of his first time acting as head coach, “I asked him if he was going to coach the game and he said, ‘No, you are.’ He threw me into the fire and it was awesome.”

After a year at the University of Victoria, Chillious took his first job as head coach at West Nottingham Academy in Colora, Md., where he coached for three years before arriving at South Kent in 2003 as the basketball head coach and co-athletic director.

“At that point, [South Kent] did not have big-time basketball. The head of school knew he wanted to be good at basketball, but there was a lot of stuff that wasn’t in place that had to be put in place,” Chillious said. “The first thing I did was establish what our culture was.”

Over the next five years, Chillious took the Cardinals to the top tier of the New England Preparatory School Athletic Council (NEPSAC) conference each year, even making a NEPSAC Championship appearance in his second year at the reins.

One of the reasons the Cardinals were so successful was due to Chillious’ ability to scout prospective players, predicting their development and fit within his program. Chillious recruited multiple future NBA players, such as Jack McClinton, Dorell Wright, Dion Waiters and 2016 Most Valuable Player candidate Isaiah Thomas.

“A lot of college coaches, especially at the highest levels, get so conditioned to look at ready-made guys, and they can’t see where they could be. I think that’s the advantage of coming from the prep school ranks,” Chillious mused. “You see kids that look like Bambi – long arms, big hands, athletic – they don’t know how to play yet, but you can forecast where they will be.”

“I think the number one thing you learn is you learn what you believe in, what you value as a coach, because every staff you’re on has different philosophies of how the game is supposed to be played,” Chillious said. “I think I was able to add to my toolbox in a great way.”

In 2020, Chillious was welcomed back to the South Kent School, where he resumed his role as head coach, while also becoming Associate Director of Athletics and Director of Basketball.

“[South Kent basketball] is kind of like my baby. You feel like you got something started and you try to help any way you can. Obviously the best way I can help is by being here and building it again,” Chillious said.

This season, Chillious led the Cardinals to a 17-13 record, becoming the No. 3 seed in the NEPSAC AAA Tournament and making it to the semifinals.

After more than 20 years of coaching, Chillious said his role at South Kent is much larger than the wins and success he has found over the years.

“What [South Kent] signifies to me is a place where I can come and help young men reach their dream, both on the court and off the court,” Chillious said.