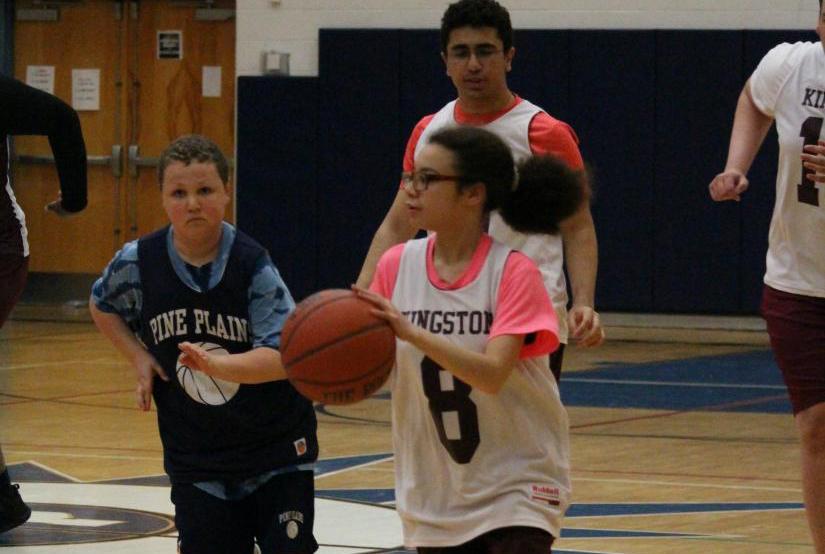 The court inside the Stissing Mountain High School gymnasium reverberated with the sounds of bouncing basketballs as the Pine Plains Central School District hosted a unified basketball team fundraiser in May. Photo by Kaitlin Lyle

June 1, 2022
By
Kaitlin Lyle
kaitlinl@millertonnews.com
“We make sure to have senior games as we would for any other varsity sport for all students involved.” Tara Grieb, Stissing Mountain Junior/Senior High School Principal

PINE PLAINS — Between the players’ enthusiasm and all of the support and infectious spirit, the Stissing Mountain High School Unified Basketball Team had an electrifying night to honor its graduating players at its Senior Recognition Game on Wednesday, May 18.

Stissing Mountain Junior/Senior High School Principal Tara Grieb said the Bombers’ Unified Basketball Program has been going strong for several years. It allows students who likely wouldn’t otherwise play a varsity sport to have that opportunity. In addition to the athletes, she said there are varsity athlete helpers and other student helpers who “play” on the team with them.

“It is a wonderful experience for players, coaches and spectators,” Grieb said of the program.

Led by Coaches Christa Brenner and Sue Lydon, this year’s unified team consists of six players (three of whom are seniors) and four partners.

Senior Recognition Night was held at 4:30 p.m. on May 18 prior to a game against the Rondout Valley Unified Team.

Stissing senior players Chris Hurley, Ryan Curry and Jake Lyman were recognized for their contributions to the team and congratulated by the school community, as were senior partners John Tomasetti and Lilyanna Brenner.

“We make sure to have senior games as we would for any other varsity sport for all students involved and call their name [and] recognize them the same way we do on all other teams,” Grieb said.

In fact, the players’ enthusiasm proved so contagious that the cheers reverberated throughout the bleachers as the players sought control of the ball.

While the final scores of the Stissing Mountain game against Rondout Valley have not been released, Grieb spoke highly of the Bombers Unified Team’s endeavors during this season.

“The season was amazing as it always is, and we look forward to future years of the program,” she said.