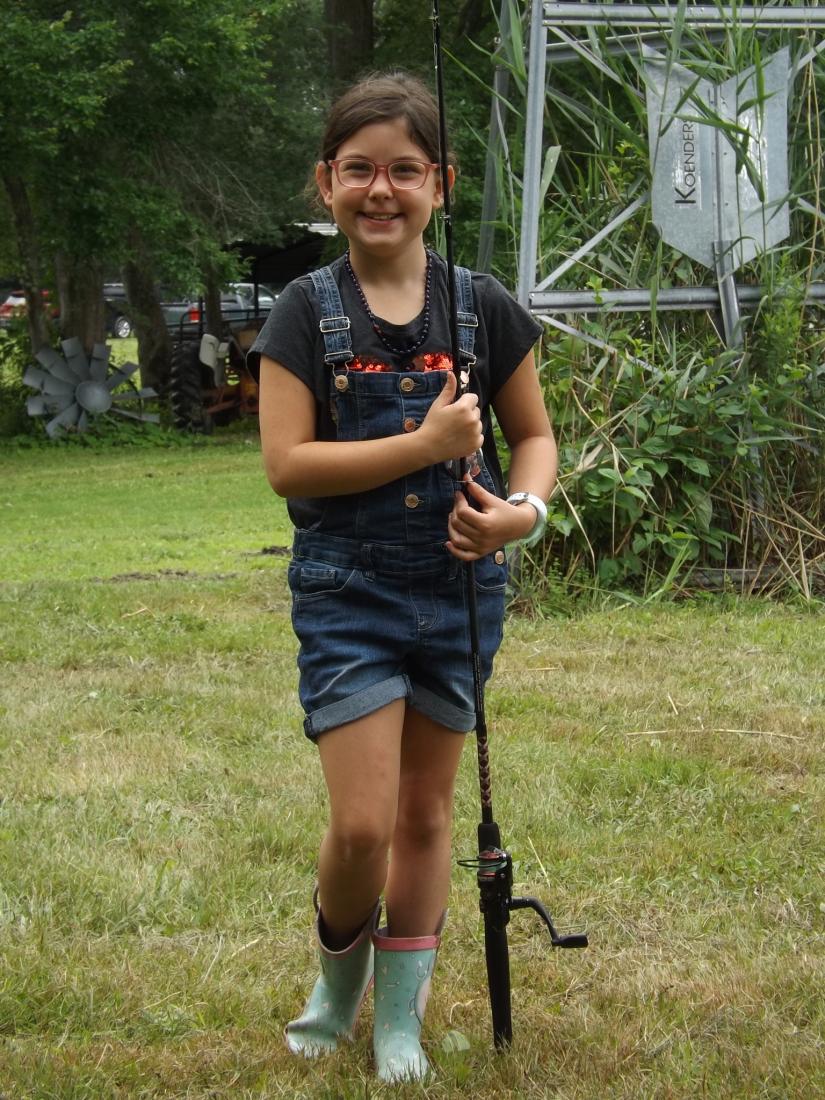 Brooke Kaine, 9, readied her fishing pole for an afternoon of reeling in fish at the annual Ralph Vinchiarello Memorial and Lions Club Kids’ Fishing Derby on Sunday, July 11. Photo by Kaitlin Lyle

AMENIA — Casting their lines into the water with the hopes of reeling in a prize catch, the area’s young fishermen and women were determined to lure a fish or two out of Vinchiarello’s Pond at the annual Ralph Vinchiarello Memorial and Amenia Lions Club Kids’ Fishing Derby on Sunday, July 11.

Running from 10 a.m. to 1 p.m. at the Vinchiarello Pond behind Freshtown Plaza on Route 22 in Amenia, the Lions Club was lucky to have good weather for the free derby. Though the skies were overcast and the humidity climbed as morning gave way to afternoon, the children had their hearts set on catching some fish to show their families, come rain or shine.

By Lion Lori Hale’s count, this year’s derby drew a total of 37 children between 11 months old and 15 years old who came out to fish, plus their extended families.

“We were so thrilled with the event and so was the Vinchiarello Family after having to cancel last year due to COVID-19,” Hale said. “We consider ourselves very fortunate to have so many families come out between the pandemic fog and all the rain we’ve been experiencing recently. The fish must’ve been excited too because they were biting as well!”

The children scurried to find a prime spot around the pond to fish. Whether they were first-time fishermen or seasoned sportsmen, a good time appeared to be had by all.

As it was only children who could actually fish at the derby, parents and other family members stood by to offer encouragement, often guiding the fish out of the water. Big or small, every catch counted and each fish was welcome with excitement.

For children ages 10 to 13, Darryl Avery, 13, of Millerton won first place with a 14.75-inch catch, followed by Hannah Avery in second place with a 9-inch fish and Shamus McCarthy, 10, of Dover in third place with an 8-inch fish.

Hale said the trophy for the Most Fish for the Day ended with a tie between Jacob Weaver and Hannah Avery at nine fish: Jacob ultimately edged out Hannah with the largest fish and by catching a turtle, resulting in Hannah earning second place.

Along with thanking Renny’s Deli in Dover Plains for the free worms, the Lions thanked the Vinchiarello family for creating a great day of memories.

Next the Amenia Lions Club  will host the annual Community Classic Car Show on Sunday, Sept. 19, at the Four Brothers Drive-In Theatre at 4957 Route 22 in Amenia.