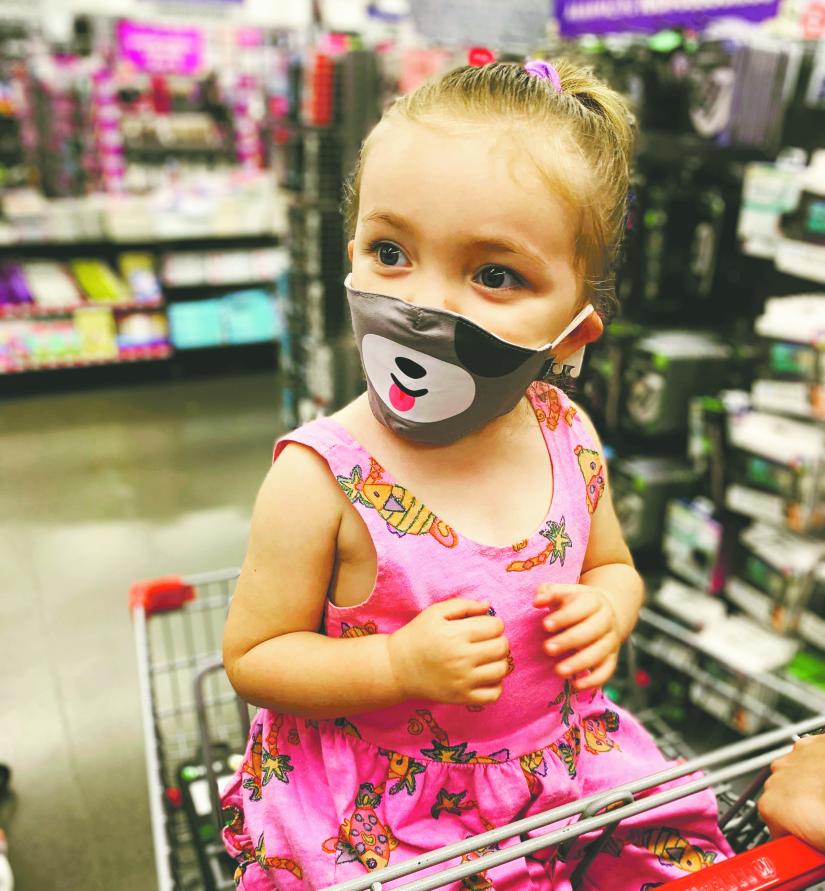 The NorthEast-Millerton Library hosted a competition for the Best Masks this past summer to encourage mask-wearing. In the children’s division, 2-year-old Darla Gangloff won in the online voting division.  Archive photo submitted

The year in review

Remembering the challenges of 2020

HARLEM VALLEY — Last week The Millerton News reviewed the top stories of the first half of 2020, a year with challenges including a global health pandemic and a collapsing economy. In this week’s edition, the year in review will take a brief look the headlines between July and August.

As New York State and Dutchess County to respond to the COVID-19 crisis, summertime activities in the Harlem Valley continued — including summer camp, summer school, fundraisers and other area celebrations — altered to fit the new normal (or canceled) or a virtual platform.

Responding to the urgent call for police reform, local police agencies — including those in Millerton, Pine Plains and Millbrook — began to review their policing strategies, policies and procedures to develop plans to address community needs, promote community engagement and address “any racial bias and disproportionate policing of communities of color,” as mandated by Governor Andrew Cuomo’s Executive Order. The Dutchess County Sheriff’s Office and New York State Police also re-examined procedures through this and other months.

The town of North East created a Zoning Review Committee (ZRC) and appointed the nine-member board.

While the Stissing Mountain Class of 2020 celebrated its graduation at a ceremony held on Sunday, July 12, New York State Senator Sue Serino (R-41) officially announced her breast cancer diagnosis to the public in an effort to raise awareness of the importance of maintaining routine health screenings during the COVID-19 pandemic.

On Wednesday, July 29, the town of Pine Plains officially closed on the sale of a property at 12 North Main St., bringing it a step closer to plans to revitalize its main hamlet area.

Having served the village of Millbrook since the start of 2017, Mayor Rodney Brown submitted his letter of resignation on Friday, July 31. Brown announced his intent on June 9; he gave no reason for his decision to leave office just months before his term was scheduled to end. Village Trustee Mike Herzog served as interim mayor until year’s end and was just re-elected to serve as village trustee again in 2021.

With the start of a new school year, Harlem Valley school districts began submitting their individual re-entry plans to the New York State Department of Health (DOH) and the New York State Education Department (NYSED) between the end of July and the start of August. The Webutuck, Pine Plains and Millbrook school boards held multiple virtual meetings to discuss the logistics and complications that could potentially arise once students and staff returned to campus.

Hundreds of thousands of people lost power in the wake of Tropical Storm Isiais on Tuesday, Aug. 4, throughout the Tri-state region, with fallen trees and wires.

On Tuesday, Aug. 11, Pine Plains voters cast their ballots in a special election to authorize the Pine Plains Fire Company to issue $275,000 in bonds to finance the purchase of a new 2021 Class A pumper to replace an old firetruck. Out of 77 votes cast, 68 voted in favor of the purchase; nine votes were against the buy.

Though Election Day was still months away, Gov. Cuomo signed a new law into effect on Thursday, Aug. 20, to make absentee ballots permissible in the 2020 election.

In Millbrook, the Cary Institute of Ecosystem Studies received support in the amount of $11 million through its Campaign for Cary for a renovation project, with the hopes of raising the remaining $2 million.

After more than 20 years of planning and saving, the Amenia Free Library held a ground-breaking ceremony on Saturday, Aug. 29, to celebrate its long-awaited expansion, with an opening date for the new addition scheduled for Wednesday, June 30, 2021.