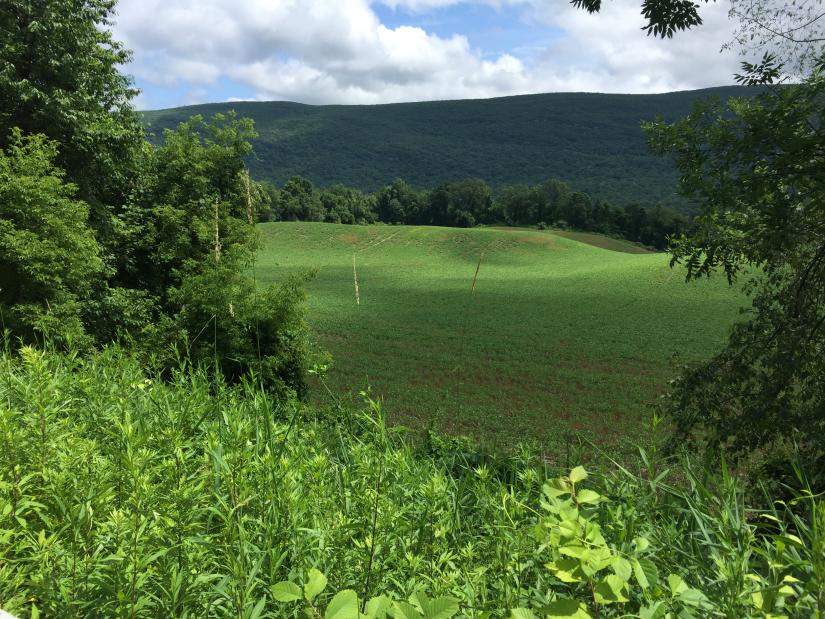 The Boston Corner farm owned by Anthony Palumbo in the town of Ancram has been farmed for more than 100 years, the last 20 by farmer John Langdon.
A knoll on the farm is now the subject of a controversial excavation application before the Ancram Planning Board. Photo by Norman Osofsky

BOSTON CORNER — According to www.worldatlas.com, the difference between a knoll and a hill is that “knolls are generally secluded and smaller in size than hills.” The British term “knoll” typically refers to “an ordinary hill” that is comparatively “tiny in size” and “characterized by a round top,” added the reference website.

That’s a key point, according to the group of residents fighting the farmer, landowner and excavator who are seeking permission from the Ancram Planning Board to excavate 25,000-cubic yards of gravel from the Boston Corner farm in the town of Ancram’s Scenic Overlay District, which normally prohibits such actions.

According to the town of Ancram’s guidelines on Protecting Scenic Views, Ancram created the overlay district to protect its ridgeline and steep slopes, which includes 1,164 acres — 4.2% of the town’s total 27,464 acreage. That includes 69 of 1,250 parcels that are more than 800-feet in elevation with slopes steeper than 15 feet that are visible from more than 4 miles of town roads.

According to the guidelines, “Ancram’s goal is to preserve scenic views throughout town, [which] has open rolling hills, ridgelines and slopes everywhere… Their aesthetic value contributes to Ancram’s unique scenic character… Careless development on steep slopes can decrease stability, cause erosion, increase storm water runoff and fragment habitats.”

There are a few exceptions to the rule, however, including for activities like agriculture, which qualifies the Langdon Hurst Farm, the farm in question. According to local neighbors, the land has been owned for more than 20 years, possibly even 30 years, by Anthony Palumbo of Palumbo Block Co. Inc. in Dover Plains (noted as “a leader in the manufacturing of concrete block” online).

The land has been farmed by John Langdon for at least two decades; he previously had some animals there but now grows corn and soybeans and sells it as livestock feed up north.

Langdon is growing soy this season, according to excavator Fred Schneeberger, which will make excavation easier, as soy is a shorter crop than corn and will be easier to cut down than those tall corn stalks.

The application before the Planning Board is not technically for a gravel mine, as some neighbors feared. Rather, it’s for “an agricultural use to level out the land to make it more suitable for farming,” explained Planning Board Chairman John Ingram.

Langdon reportedly fears his farm equipment, which Schneeberger described as “state-of-the-art,” cannot safely handle the steep grade of the knoll in question and could become dangerous if attempted. That’s why he approached Schneeberger to excavate that portion of farmland.

Schneeberger, who has worked in the construction business since the 1970s and has run his Ancramdale excavation business without complaint for many years, submitted an application to the Planning Board on May 5. Ingram said it makes no difference that the excavator submitted the application instead of the land owner or the farmer.

“It doesn’t matter if the excavator made the application; he’s the one doing the work,” said the chairman. “The farmer sent a letter to the Planning Board advising us he’d like the knoll removed to do his farm work.”

Ingram said removing the 25,000-cubic yards of gravel on the land that’s been farmed for more than a century “is less disruptive to do in stages; to remove the soil off the knoll, remove the knoll and then put the soil back then to try to strip the whole field and put the soil back.”

Next door neighbor Carol Falcetti, who has rallied nearby residents to petition the Planning Board to reject Schneeberger’s application, said there’s no need to go to such extremes and remove all 25,000-cubic yards.

“We believe that 25,000- cubic yards do not have to be excavated, with bulldozing and with engineers’ plans, we could bulldoze some steepness out, maybe 5,000 yards, to make it safe for the machine operator, for whatever machine he’s using and keep the topography of the field in harmony with the rest of it, because that’s what the beauty of the scenic corridor is,” she said. “We have the beauty of rolling hills; we don’t have to cut out 25,000-cubic yards. To all of us, that’s the compromise. The farmer needs to be safe and we want to keep the beatify of our scenic corridor and that would do both, we believe.”

Schneeberger wants to make it clear that he got the go-ahead from the Planning Board when he was first asked to do the work.

“When the farmer approached me about this, I asked all of the powers that be if this was a  permitted use where it is because of what it is,” he said. “It’s an agricultural reclamation because of what it is; they’re calling it a gravel mine. It’s not a mine. We do not need a New York State mining permit. The town has that letter on file from the state that we do not need a mining permit, from the Division of Mineral Resources.”

He added that he doesn’t want to “start a war with anybody” and truly believes the knoll is “steep enough you would have trouble getting [machinery] up and down.” The excavator added that he will be content with whatever ruling the Planning Board makes.

“If the town tells me I can’t do the work because the law doesn’t permit it, than so be it,” he said, repeating he did get consent early on.

There’s another gravel mine in the Boston Corner neighborhood, the O&G Gravel Mine, which though active doesn’t seem to create much of a stir.

Ingram said O&G renewed its permit several years ago and there was “no resistance at that time.” Falcetti said with the Palumbo farm, though, she’s very concerned.

“That field has been farmed for 100 years; it’s been farmed for the last 20 years by the same farmer now, and there’s a lot of construction going on and Palumbo needs gravel,” she said. “And then there could be as many as four big tractor trailer trucks making six round trips an hour… For me, the noise from a truck every 11 minutes, it definitely increases heavy traffic for another, figure 12 to 15 months. It’s a lot.”

If approved, Schneeberger expects the work to take about 15 months, simply because he doesn’t plan on working through the winter when there is snow and ice, as it’s harder to do so as mud could get tracked on the roadway. He also noted he doesn’t plan on removing all of the gravel at once.

“It will be a little bit at a time as we go, so the visual impact will not be that big,” he said, adding he will hire all local workers, likely between three and four.

Yet Falcetti is nervous that despite the more than 26 residents who signed a letter pleading with the Planning Board to reject Schneeberger’s application, the law and the powers that be are not on her side.

“We’re going to lose this,” she predicted.

Still, she hasn’t given up hope just yet.

“Bottom line, we want to preserve our scenic corridor,” she persisted.

That’s why Falcetti and her supporters continue to research with the state and its Department of Environmental Conservation, as well as with the Planning Board, to see if there are any loopholes or other ways to force the applicant to either compromise or withdraw his application altogether.

Meanwhile, the public hearing that was continued from the July Planning Board meeting regarding the Schneeberger application will continue in person at Ancram Town Hall at 1416 County Route 7 on Thursday, Aug. 5, at 7 p.m.