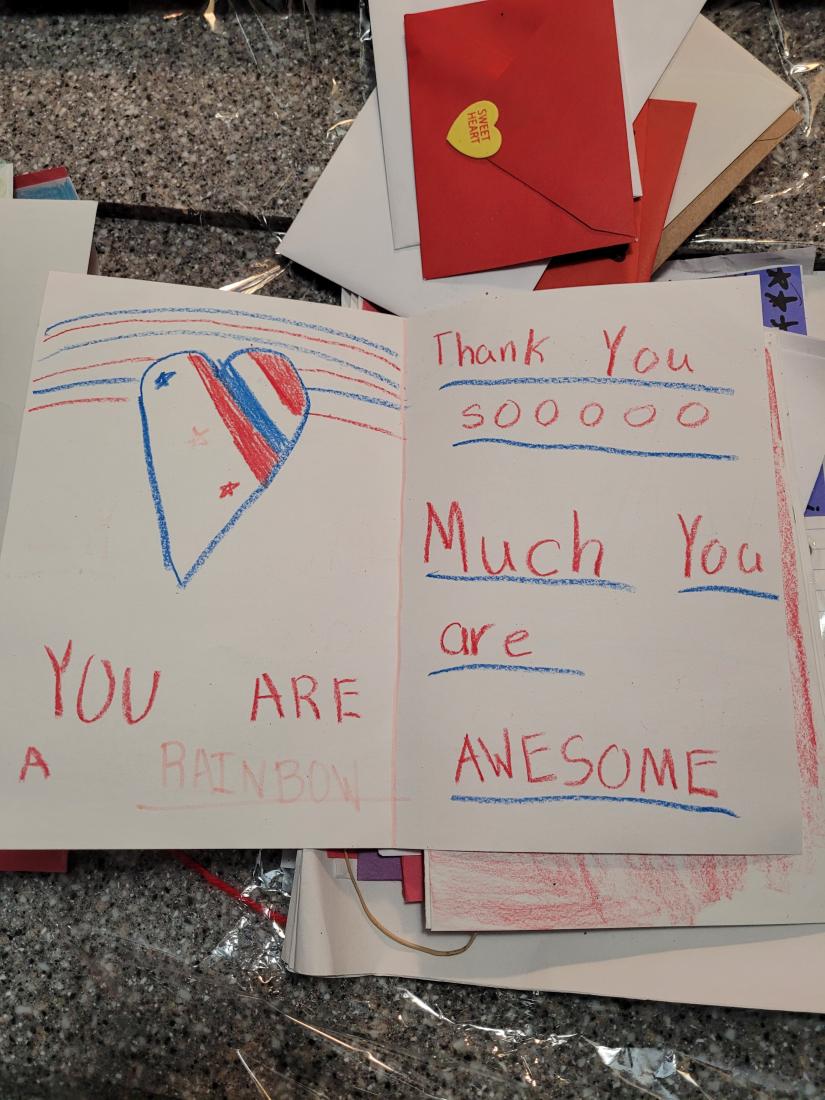 These are some of the 100 Valentine’s Day cards sent to members of VFW Post 5444 in Dover by U.S. Rep. Sean Patrick Maloney (D-NY-18), for his Valentine’s for Veterans program, which he started seven years ago as “one small way to remind our vets that we’re behind them.” Photo by Madison Fletche

DOVER PLAINS — Members of the Veterans of Foreign Wars (VFW) of Post 5444 located on Route 22, smack on the border between Amenia and Dover, received a sweet reminder that they have not been forgotten this Valentine’s Day, Feb. 14, as 100 Valentine’s Day cards were delivered to VFW Post 5444 Sr. Vice Commander Madison Fletcher on Thursday, Feb. 11, by Khristian Silvis, director of military and veteran affairs for U.S. Rep. Sean Patrick Maloney (D-NY-18).

The two met up in Pawling at Pizza 22 last week, where Silvis handed over the Valentine’s, which Fletcher later drove to the Post home to share and hang on the walls for the VFW members to read. Although Post 5444 has not been holding regular meetings during the past year due to the coronavirus pandemic and social distancing safety protocols, Fletcher said members still stop by the Route 22 Post home, and that they will be heartened to see that more than 130 Hudson Valley schools, libraries, Girl Scout troops, businesses and individuals wrote Valentines for Maloney’s annual program.

“It’s heartwarming that these kids do it in their school, and that their teachers actually make a point of doing it, just like Veterans Day, to teach their students about people who have served, and how important they are to our country,” said Fletcher, adding that the veterans who read the Valentine’s Day cards at the VFW usually feel “humbled and honored that young children even think about writing them to us.”

This is the second year that Fletcher has dealt with Mahoney’s office including Post 5444 among the Hudson Valley veteran organizations in its Valentine’s for Veterans program, which he started seven years ago.

“My dad was a disabled Navy veteran, so making sure we honor our veterans with appreciation and action is personal to me,” said the congressman in a prepared statement after distributing thousands of Valentine’s to Hudson Valley veterans at the Castle Point VA Medical Center in Wappingers Falls and the VFW Hall in Beacon on Feb. 12. “After nearly a year of social distancing and physical isolation, it’s more important than ever that we reach out to Hudson Valley’s veteran community to give them the recognition and love they deserve.”

Fletcher said the pandemic has been especially difficult on the veterans community, which already battles serious issues of isolation, depression and suicide after returning home from combat.

“We can’t get together, we haven’t had meetings and we can’t talk to each other,” she said, “so for these kids and their teachers to go out of their way, for the congressman to go out of his way, to make sure veterans get them — it’s really nice.”

Fletcher, who said she “wasn’t doing anything” special for the holiday known best for romance, said “it’s always fun to read” the Valentine’s Day cards from the students and others who pen them to the veterans. Some of the messages that have been written in years past have said things like, “Thanks for serving,” and “Will you be my Valentine?” according to the sr. vice commander.

Mahoney said the gesture is important, as much to him and those who write the cards as to the veterans.

“This is just one small way to remind our vets that we’re behind them,” he stated. “Thank you to everyone across our region who helped bring a smile to a veteran’s face this year.”

Meanwhile, Fletcher said while the social restrictions imposed because of the pandemic have been difficult for her and others in the VFW to live with, Post 5444 has been extremely fortunate in that none of its members, as far as she knows, has succumbed to the virus itself.

“Luckily, cross our fingers, we have not that I know of in our Post, even though it’s a small Post, I don’t know of anyone who has COVID,” she said with a sigh of relief.