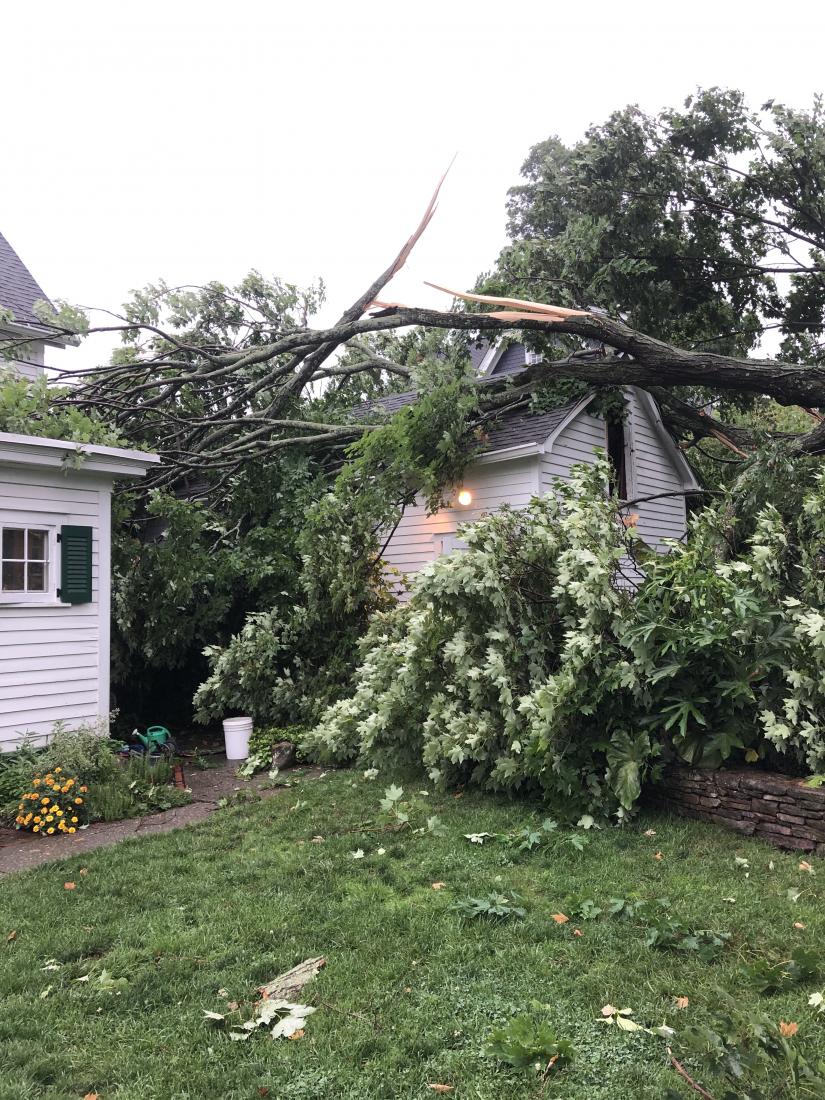 Millbrook interior designer Ashley Lempka took a photo of an old maple tree that split in half and fell on top of her garage at her home in the village of Millbrook on Tuesday, Aug. 4, during Tropical Storm Isaias.  Photo by Ashley Lempka

HARLEM VALLEY — Just as millions of Americans living along the Eastern Seaboard — and those of us living right here in the Tri-state region — have dealt with the hardships of existing during a global pandemic, all were forced to deal with Tropical Storm Isaias, which arrived Tuesday afternoon, Aug. 4. In New York the following day, Governor Andrew Cuomo declared a State of Emergency in Bronx, Dutchess, Kings, Nassau, New York, Orange, Putnam, Queens, Richmond, Rockland, Suffolk and Westchester Counties, adding it “applies to all counties bordering the 11 specified.” The damage crossed borders into Connecticut and Massachusetts — leaving hundreds of thousands in the dark for more than a week.

Locally, Isaias felled trees with heavy gusts of wind and rendered homes and businesses without power — some were still waiting for restoration as of presstime on Tuesday, Aug. 11.

According to Millbrook resident Kleber Santos, who owns and runs the cageless doggie day care and boarding business, Dog Meadow Park, with his wife, Laura Dodd Evans, out of their Millbrook home at 578 Tyrell Road, which also does some animal rescue and has sheep, goats, chickens and ducks, “a tornado went through our property at about 2 p.m. on Tuesday, downing several trees and doing a lot of property damage.”

Although official reports of a tornado haven’t been confirmed, Santos “lost a chicken coop, fences and dog runs during the storm.”

According to Colleen Pillus, communications director for the Dutchess County Executive Office, though, “Emergency Response did not have any reports of a tornado in Millbrook and there is nothing confirmed.”

Santos said that whatever the weather event was — it was both scary and dangerous, and he’s just glad his animals and workers are safe.

“All of our farm animals and dogs are safe. We brought everyone in by keeping an eye on the weather radar and news reports,” he said. “All people and animals were brought inside and kept safe.”

Santos added they consider themselves lucky.

“The damage was all in the back of the house, but we lost about 10 trees,” he said. “We only had minutes to get everyone safe. There were heavy rains; we heard the trees snapping as they fell.”

And Millbrook interior designer Audrey Lempka also suffered structural damage to her home, as “an old Maple tree split in half and fell on our garage!” she exclaimed in an email to this newspaper.

According to Central Hudson, “The storm caused widespread damage throughout the Northeast, impacting 3.7 million homes and businesses and more than 770,000 in New York State alone.”

The damage caused trees to tumble onto roadways along with live wires, leaving local routes blocked until they could be cleared away and residents without power, phone, internet, cable, etc. Thick tree branches lay scattered along the roads, some even suspended in the air by tangled power lines. Sirens could be heard in the distance as first responders were dispatched to help community members in need. Neighbors were seen standing outside of their homes assessing the damage to neighboring properties as well as to their own.

Along with providing the latest information from Central Hudson and NYSEG, the conference call supplied municipal leaders with information regarding the Dutchess County Public Works’ efforts in coordination with the utilities to clear roadways; the county’s 911 Communications Center; and shared details among municipalities.

According to the county, the 911 Communications Center “dispatched over 1,100 storm-related calls between 7 a.m. Tuesday and midnight Wednesday.”

The multi-pronge county-wide approach has been key in helping the Hudson Valley deal with the aftermath of Isaias, agreed local leaders, who are still scrambling to get their communities back to today’s pandemic-era normal.

“It’s affected the town of North East as it has affected other towns,” said North East town Supervisor Chris Kennan, reporting that as of Thursday morning, Aug. 6, there were 700 customers in North East without power. “This is so much bigger and more damaging a storm than Central Hudson predicted. We have a lot of people who still don’t have power and because they don’t have power, they might not have water, they might not have cell service, so we’ve been pushing Central Hudson to get out here.”

Though he commended the county’s coordination efforts, Kennan said it was a frustrating situation “because individual people have individual situations, particularly people to whom power is critical to their health.”

“The storm knocked out power and cable to the whole town of Amenia,” town Supervisor Victoria Perotti remarked. “Nobody was spared. I was even told by NYSEG that the damage was even worse than the damage they had from Hurricane Sandy.”

Recovery efforts in Amenia have been ongoing, with NYSEG crews working with Highway Superintendent Megan Chamberlin on downed wires.

Perotti said the town made dry ice and water available at Amenia Town Hall, where residents could also charge their cell phones; bottled water was also available at the Wassaic firehouse.

In Pine Plains, town Supervisor Darrah Cloud attributed the town’s main issue to the fact that Central Hudson’s server went down right when the storm started. With the server down, she said there was no way for residents or government officials to get the word out about where trees and wires had fallen, which led to people to call 9-1-1 for help. Whereas Cloud said the emergency personnel were “incredible” and tried to fix things as fast they could, she said the town couldn’t get the emergency information routed to Central Hudson in a manageable way.

“It is a bit of a frustrating mess,” she said, “but in terms of the town, we had trees down, wires down, trees blocking roads. The Highway Department got everything they could right away that didn’t involve wires, so they were out all night right after the storm cleaning trees and getting trees off the road. All that was left was anything that had a wire involved in it, and I saw Central Hudson was working on some of the problems.”

On Thursday evening, Cloud said she received an email from Central Hudson informing her that 75% of the town’s power had been restored. Though she confirmed the town had a fair amount of people lose power due to the storm, she didn’t have an exact number, given that the server was down.

She said the county’s emergency call on Aug. 5 informed her that the neighboring town of Stanford took a harder hit than Pine Plains, losing 80% of its power at one point.

“It’s always really good to hear what other people are doing,” Cloud said. “I think this storm was a complete surprise to Central Hudson.”