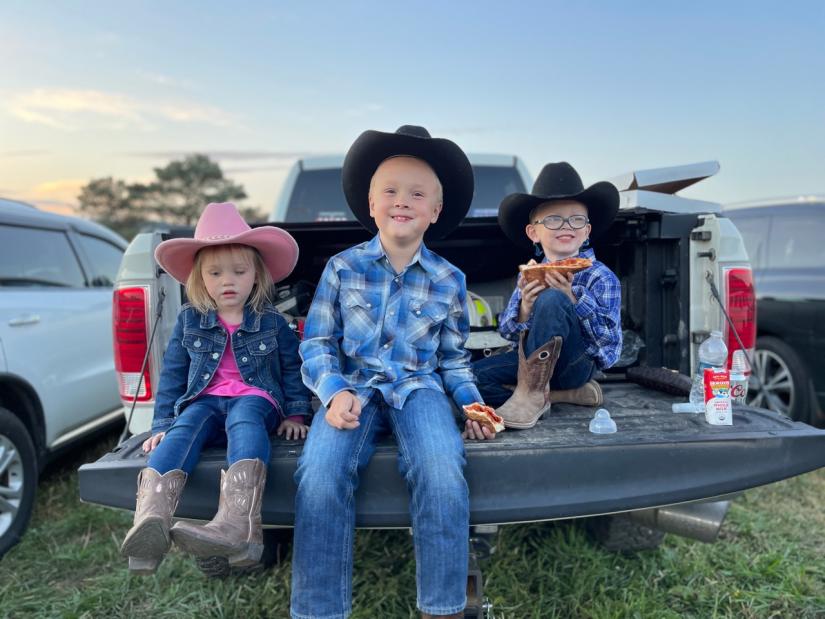 Rylan, Jake and Aiden Arold came all the way from Saugerties to watch the rodeo at Keane Stud Farm sponsored by Silo Ridge in October, after which they enjoyed some pizza on the back of a pickup truck together from Four Brothers Pizza in Amenia. Photo by Anne Day

Reflecting on the challenges of 2021

A Year in Review — Part II

HARLEM VALLEY — Last week The Millerton News ran Part I of its Year in Review of 2021, reflecting back on the second year of how Harlem Valley residents enduring living through the coronavirus pandemic and its impact on the economy, home life, education, work, relationships and so much more. (See here)

This week the paper continues its look at how the northeastern Dutchess County communities we call home fared last year, and some of the top issues our town and village governments dealt with as they worked to ensure our quality of life remained high. What follows are some of the top stories from 2021.

Having raised more than $1 million for Phase One of the temporarily-renamed Millerton Community Park’s revitalization of Eddie Collins Memorial Park off Route 22, local leaders, volunteers and supporters celebrated the ground-breaking last August.

The roughly $8 million project will completely redo the park as a massive recreation space for the entire community, with a brand new ADA-compliant pool, playground, soccer field, baseball field, basketball courts, trails, pavilion and more. Most of the money to pay for the project is being raised through donations, grants and other contributions.

In Millbrook, demolition of the former Bennett College campus began in October to make way for the 32-acre Bennett Park, which will connect to the soon-to-be-done Thorne Building Community Center (TBCC), a multi-purpose community center that will provide various creative spaces for the whole community. The village finally handed over the Thorne Building to the 501(C)3 nonprofit TBCC. The project has been years in planning and the entire community has been involved in the process from the get-go.

Silo Ridge Field Club in Amenia sponsored a community rodeo in October at Keane Stud Farm, also in that town. A couple of thousand attended, although some animal activists were not very happy about the event.

Look for Part III of The Year in Review in next week’s issue of The Millerton News.

Throughout the state local municipalities dealt with the new marijuana law in 2021. Last March, New York joined 19 other states across the U.S. in legalizing adult-use recreational marijuana when it passed the Marijuana Regulation and Taxation Act (MRTA).

Former Governor Andrew Cuomo gave municipalities in New York until Dec. 31 to decide to opt in or opt out of allowing cannabis dispensaries and marijuana lounges.

Countering the happy milestones reported, the Harlem Valley also experienced its share of trials and tragedies in 2021. State and local authorities addressed issues concerning anti-Asian bias, anti-masking concerns and even an anti-Biden banner hung in full view of passing motorists and school buses.

Local school districts faced COVID-19 outbreaks and concerns about state mask mandates; the Pine Plains Board of Education dealt with harsh complaints from parents about mask breaks for their children.

In Amenia, more than 42 lawsuits were refiled against the town by residents of Silo Ridge Field Club, who claimed they were unfairly assessed. The Amenia elections were dragged into the mess as candidates tied to Silo Ridge — one who was suing the town — ran for Town Board.

In early November, the Millerton Fire Company responded in minutes to a devastating house fire on South Elm Avenue that claimed two lives. The community pulled together in support of the families affected by the blaze, organizing fundraisers, food drives, clothing drives and even finding some of the displaced families housing.

While dealing with the ongoing pandemic, Harlem Valley residents sought appointments to get their COVID-19 vaccines at the pop-up clinics organized by Dutchess County agencies, local pharmacies and school districts, followed by second doses and booster shots.

Following last November’s historic national election, our 2021 local elections could be considered calm by comparison. But perhaps not everywhere.

In Amenia, a new independent party, Amenia Strong, formed. Its slate of candidates ran in the Republican Primary, with some success, as well as in the General Election, running against incumbent candidates running for Town Board and town supervisor.

Among the Amenia Strong candidates was supervisor candidate Julie Doran, the office manager of Silo Ridge. Along with her estranged husband Peter and Stoneleaf Construction LLC Principal Juan Torres (whose company is partner to Silo Ridge Ventures), Doran was among those who filed a lawsuit against the town of Amenia challenging the entire tax roll for inequitable assessments.

New York State also experienced a change in leadership in August when Governor Andrew Cuomo announced his resignation from office following multiple reports of sexual harassment — all of which he denied. In his place, New York State Lieutenant Governor Kathy Hochul stepped forward as New York’s first female governor. Hochul plans to run for a full term as governor on the Democratic ticket come November.