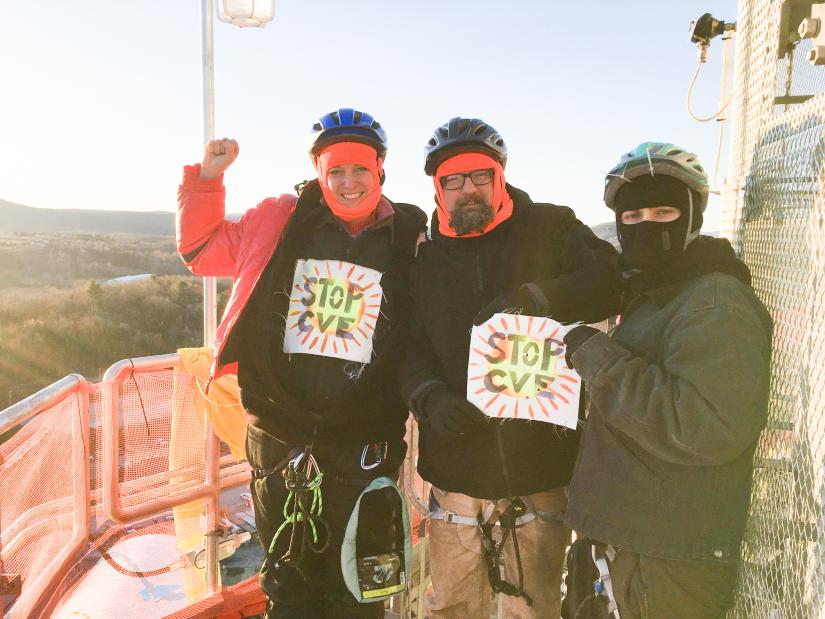 Protesters get one year probation for scaling Cricket Valley smokestacks

DOVER PLAINS — Almost nine months after they were arrested for criminal trespassing on the Cricket Valley Energy Center (CVEC) property, New York residents Creek Iversen, Ben Schwartz, Monica Hunken and George Elliot had their day in court on Monday, Aug. 3, where they each received one year probation for climbing the power plant’s smokestack last November.

Arriving at the power plant around 5 a.m. on Nov. 16, 2019, the four climbed the 275-foot smokestack to protest CVEC’s operations. Schwartz, a farmer from White Pine Community Farm in Dover Plains, cited impact on the students attending the Dover Union Free School District (located a few miles from CVEC) as well as its impact on local resources like the Great Swamp. Additionally, the protesters contribute a 25% rise in greenhouse gas emissions to the power plant.

Elliot studies biology and urban sustainability and believes CVEC shouldn’t have been built in the first place. He said, “it’s frustrating that these things are still being built and we have to spend our time fighting this infrastructure buildout rather than building the alternatives and putting the investments where they make sense from an economical and an environmental perspective.”

A farmer based in Kingston, Iversen feels protective of the land and of people’s health.

“I feel, as many citizens feel… a sense of outrage — I feel like people are making decisions based on their own profit rather than the health of our entire population…”

Fearing their complaints were falling on deaf ears — and that CVEC was continuing to operate — Hunken said they decided to take direct action.

“That’s the people’s tool for organizing when the powers that be aren’t listening,” he said.

After supporting the fight against fracked gas power plants from the sidelines, Elliot said the protesters were ready to take escalated steps to shut down the plant for a day and draw more media attention to the issue.

“We shut it down for 12 hours this way and we did it in a really beautiful vibrant way with the community,” Hunken remarked.

Yet their act was just one of a series organized by the group ResistCVE that day, as a group of 10 people locked themselves to a tractor in a blockade to prevent CVEC employees from entering the power plant, resulting in a halt to its construction and its employees being sent home for the day. A rally was also held across from CVEC, drawing around 200 protesters on site.

Following their descent from the smokestack at sunset last November, the four climbers were arrested and charged with criminal trespassing in the third degree; they were released that evening.

The four protesters appeared at Dover Town Justice Court last Monday. Though they initially risked 30 days in jail, their sentence was reduced to one year of probation plus 20 hours of community service.

“We felt those were quite high, considering no one got hurt, we came down as soon as the New York State Police asked us to and we were very respectful,” Schwartz said. “We feel really strongly that it was worth all the risk involved to really highlight the impact of this plant: it’s going to bring out New York State’s greenhouse gases from power plants by 25%, which is the last thing we need right now in this time of climate change.”

Hunken said, “It’s a shame that we’re being treated like criminals like this when the real criminals are the big businesses, CVE.”

“It’s absurd to have peaceful non-violent civil disobedience be treated in this manner rather than facing the sociopathic criminals that are destroying our land and health,” Iversen said.