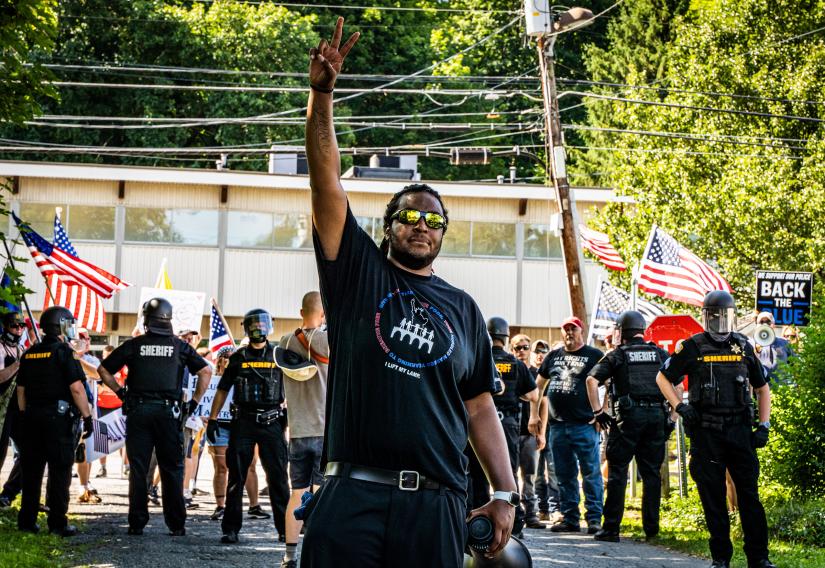 Royal Parker organized a rally for Black Lives Matter (BLM) on Saturday, July 18, in neighboring Pleasant Valley. He marched with protesters from a Blue Lives Matter group behind him. Parker has organized several peaceful BLM rallies in the village of Millbrook in recent months. Photo by Dave Boccio

PLEASANT VALLEY — There have been many protests and marches lately, some local, some far away — all in the name of social justice. The local protests have been mostly peaceful mirroring the kind of behavior expected in small towns and villages in the Hudson Valley. But on Saturday, July 18, in the neighboring town of Pleasant Valley, that was no longer true. The peaceful rally planned for that day, for the Black Lives Matter (BLM) movement, met with counter protesters and it turned ugly fast.

BLM organizers Royal Parker, Kevin Halcott and Lauren Sky, along with a number of others, many from the town of Washington and village of Millbrook, announced their plans to march on July 2. Immediately afterward, they said, they began to get death threats. The protesters said they spoke with the Pleasant Valley town supervisor, and that the Dutchess County Sheriff’s Office assured them they would be protected. So plans were made to carry on the event.

Shortly after, the Dutchess County Conservative Party of New York announced a counterprotest, but Parker said he felt safe because of his commitment to keeping things peaceful, and because the group had been promised protection. There were even snacks, water, T-shirts  and a peace-keeping group wearing yellow vests; several speakers were slated to address the group, among them Millbrook mayoral candidate Kay Vanderlyn, Genesis Ramos and others. Also at the rally was Debbie Wright, the chairman of the Millbrook Democratic Committee.

Upon arrival, Parker’s group gathered at Cady Recreation Park and prepared to march the planned parade route along Route 44; the counter group gathered on both sides of the road and behind the BLM group. It reportedly started to crowd the BLM protesters in, marching toward them. Those attending the rally described it as frightening. There were signs, flags, spitting, yelling and name calling — including the “N-word,” according to Parker.

At one point, a grown man was recorded hitting a 12 year old child, knocking her to the ground, and a scuffle with the girl’s mother occurred. Another woman, Margerite Pastor, intervened, and was hit in the face while her attacker reportedly laughed.  When she tried to enlist help from officials, she said she was told she’d have to report it later.

Several of those in the BLM group have protested recently in Millbrook. The Millbrook protests were peaceful, and demonstrators were praised for their good behavior by Millbrook Police Officer Jared Witt at this month’s Village Board meeting.

Tia Scott, a 17 year old who is biracial, spoke at length about the terror she felt at Saturday’s rally. A resident of Pawling, she said it was deeply troubling.

“It was really rough. We were attacked, there was yelling, spitting, we were told to go home, and called the ‘N-word,’ coward and filth,” she said. “I’ll never forget the look of hatred that was in their eyes.”

Parker said he and the yellow-vested peace-keepers begged BLM supporters not to engage the counter-protesters, but it was hard not to. He said they knocked banners out of people’s hands, were verbally abusive and that the BLM protesters were not protected by sheriff’s deputies.