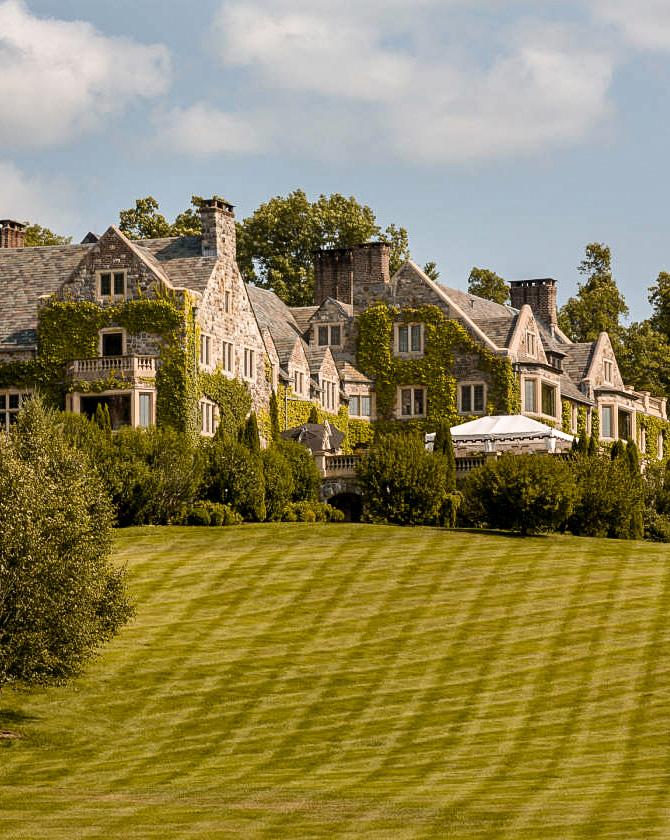 Migdale Castle, shown above, sits on roughly 350 acres off Route 44 in the Mabbettsville hamlet of the Town of Washington. The original application by Will Guidara created such a stir in the community last year that it was ultimately withdrawn. Guidara has since redrafted his plans, and shared those plans in an exclusive with The Millerton News. Photo submitted

MABBETTSVILLE — For those who thought the plan to transform the former Migdale Castle — built by steel tycoon Andrew Carnegie for his only daughter back in 1927 — into a luxury spa hotel with gourmet restaurants and other top-notch amenities was dead, think again.

NYC restaurateur, author and Kingston resident Will Guidara is still chasing his dream to develop the estate located on roughly 350 acres in the Town of Washington (TOW) hamlet of Mabbettsville. He reached out through his publicist to The Millerton News last week to share his newest plans for the application he had withdrawn from the TOW Planning Board in March 2021.

“Since announcing our plans last March, we’ve focused on listening to local feedback and refining our proposal in response to what we heard,” stated Guidara. “That work is still ongoing, but we’ve made a number of changes that we’re excited to share. At its heart, our project is designed to breathe new life into a historic Millbrook building and bring jobs and investment to the area — while preserving its character and history.

“We look forward to continuing our conversation with Town of Washington residents as we craft our new proposal,” he added.

In early February 2021, TOW residents first heard about the application made to the Planning Board by the holding company Janet’s Farm LLC for Guidara’s project. He was interested in purchasing Migdale Castle for the project, named Second Mountain.

The estate was put on the market by the Wildenstein family, valued at $14 million.

The resorts he compared Second Mountain to in other states later that month before the Town Board easily cost visitors $10,000 for a nice, relaxing weekend. There’s no word that’s what Guidara intends to charge at his hotel, once done, especially now that he is making changes for a smaller footprint.

Of course, initial plans called for the Migdale estate to be converted into a luxury hotel with two restaurants, glamping facilities, guest cottages, an indoor pool and spa, hiking trails, tennis courts and other amenities, according to the original application.

That application immediately became a hot topic at Town Board meetings and around the community. Some of the above features have since changed, said Guidara.

For one, he no longer intends to include glamping on site. Nor did he mention in last week’s interview any outdoor amenities except tennis courts, and the indoor spa and pool, if included, would only be for guests only and therefore not impact neighboring residents.

Guidara appeared at numerous Zoom presentations in 2021 with the Town Board, TOW Planning and Zoning Board of Appeals (ZBA). He needed ZBA approval for a Zoning Overlay District for his original project to proceed.

Some of those virtual meetings drew nearly 200 attendees — quite possibly a town record — as the project quickly became controversial.

Immediate neighbors said they didn’t want their pristine woodlands altered, and that such a large project would change the quaint character of the village. They also claimed Second Mountain was not in accordance with the TOW’s Comprehensive Plan (CP).

Some in town said they were overwhelmed by the sheer size and opulence of Guidara’s plans, and feared an  increase in traffic, noise and light pollution.

Others were concerned about its impact on the town’s water supply, its production of waste and that it would disturb the local environment.

Others see bright side

Yet some in the community said they favored the project, citing its economic advantages, the number of tourists it would attract to the town and village and the number of jobs it would produce locally.

Washington Town Supervisor Gary Ciferri had received a letter from Joshua Mackey, an attorney representing Guidara, on Feb. 18, 2021. The attorney requested the town amend the CP to allow for a zoning overlay district and that it permit hospitality uses in the restricted zone  and in the CP.

By April 8, 2021, Ciferri announced he had received another letter from Guidara’s attorneys rescinding the previous petition for the overlay district that would have allowed the mixed-use zone of the property.

Mackey argued that after hearing from the community and various boards, it seemed the only path toward approving the project demanded the TOW have an opportunity to amend its CP, which was passed in 2015.

A moratorium was ultimately passed by the Town Board to halt all further review of the Second Mountain application or any others seeking to create hospitality uses until the CP could be reviewed, and possibly amended.

A Comprehensive Plan Review Committee (CPRC) was ultimately formed, consultants were hired, a survey conducted and an Open House held this February.

The results indicated that the current CP does support hospitality uses. The consensus was that residents prefer smaller rather than larger facilities; the environment must be protected;  hospitality businesses must not adversely impact residences and should fit in with the town’s rural character. It was also agreed that emergency services should not be compromised, nor should anyone’s safety or security be threatened by such uses in town.

Guidara addressed some of these issues with The Millerton News, stating that the new project is much smaller in size than the original application for Second Mountain, with 77 hotel rooms rather than 95.

The accommodation structures are also fewer, down from 77 units to 40 units. Only one new residence is planned, for the Guidara family.

Parking will be moved deeper into the property, though the tennis courts will remain where they are.

The developer said he reached an agreement with the current owners of Migdale Castel to extend the purchase contract as his team moves forward.

The $60 million overhaul to the estate is expected to create 130 new jobs in addition to construction jobs. Guidara also noted that improvements will increase the property value, thereby increasing tax revenue for the TOW.

“The project fits under existing zoning provisions with modifications” and does not require an “overlay district,” he added.

The town’s aquifers and water supply will not be impacted by the project, he added, and all wetlands and related species will be protected and preserved. The project managers plan to have waste treatment equipment on site to properly dispose of all waste, as well, to deal with residents’ concerns.

Also wanting to address concerns about traffic, Second Mountain reps said there should be minimal impact on local roads as the site is located off Route 44, which can easily accommodate vehicles. Additionally, Migdale is set far from neighbors, is surrounded by hilly terrain and is not visible from the road, also mitigating concerns about additional noise and light.

Guidara said he plans to make his new plans public and available to the TOW, its residents and any interested parties so there can be future discussions. Soon he plans to submit a new application to the TOW so the project can start to move forward through the official channels.