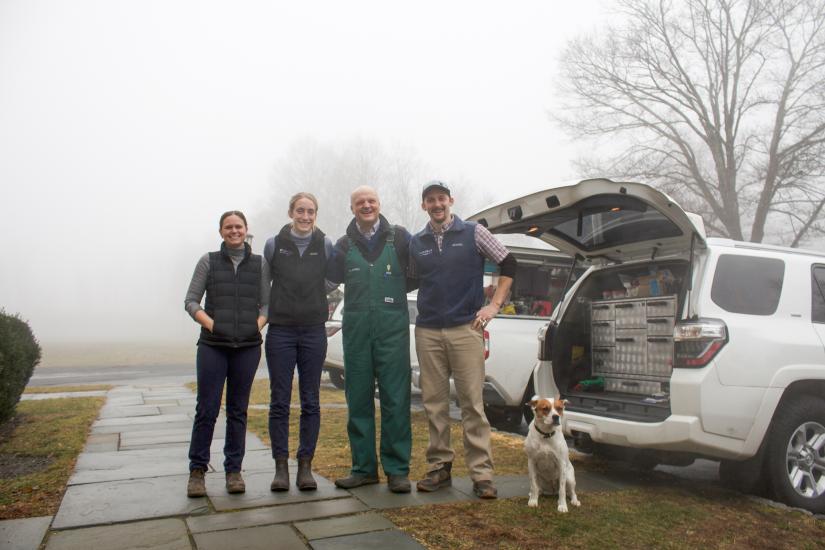 (From left) Dr. Julie Clas, Dr. Teddy Chase, Dr. Isaac Angell and Dr. Chris Moyer on Jan. 4 outside of the Bentley Veterinary offices in Stanfordville, N.Y., getting ready to head out for the day. Photo by Elias Sorich

My ride-along with a traveling large-animal vet

January 25, 2023
By
Elias Sorich
elias@millertonnews.com
“I was taught pretty early on the value of developing a rapport with a client. You can’t treat the animal without the client.” — Dr. Isaac Angell

Editor’s note: This is the first of a two-part series focusing on a day in the life of a large-animal veterinarian’s practice in the tri-corner region.

STANFORDVILLE — To travel with Dr. Isaac Angell of Bentley Veterinary Practice for a day was to witness a veterinary practitioner completely enamored with his work, and deeply connected to the region where he does that work.

Bentley Veterinary is a large-animal practice that specializes in farm animals. Its patients tend to fall on the large, stinky and hard-working side of the domesticated animal kingdom rather than the small, fluffy and genteel side.

On a recent January morning as we wended our way through the misty, dramatic hills of eastern Dutchess County and Litchfield County in Angell’s mobile animal-care truck — equipped with ultrasound, an array of medications, and surgical capabilities — Angell took the time between our various stops to share reflections from a lifelong devotion to veterinary medicine.

“I have a deep excitement for what we do. A tremendous respect for the field of veterinary medicine, and for my fellow practitioners … I often say it’s the animals that get you in, and it’s the people that make you stay.”

A soft-spoken man, quick to smile and quicker still to shift the spotlight from himself, Angell reiterated throughout the day his desire for our time together to spotlight the whole of veterinary medicine rather than his work alone.

“I think about that quote from ‘The Boys in the Boat’:  ‘You can’t just write about me, you gotta write about the boat!’ The whole picture, the difficult parts and the joyful parts, are what make the job what it is … Still, for me, being a vet has always been a passionate dream.”

An average day for Angell or the other three veterinarians at Bentley often includes three to four visits — on busy days, that looks more like six or seven. While that might sound manageable, Angell’s practice offers service to an area larger than some states, from Canaan, Connecticut, to Woodstock, New York, to Great Barrington, Massachusetts. Much of Angell’s day is spent on the road between properties.

The necessity for this kind of travel can be traced to decades-long changes to the social and economic geography of the region. In 1972, there were 275 working dairy farms in Dutchess County. In 2022, there were just 15. While dairy production in the region has steadily increased, belying an emphasis on industrial-scale dairy farming, the number of working farmers has dropped steeply off a cliff.

Angell and his wife and five children are the fourth generation of Angells to live on his family’s property. While he loves to work with all the clients he provides service to, Angell admitted to a bit of a soft spot for those who make a living working with animals: the vocational farmers that have grown rarer and rarer in the region. Helping those folks when able keeps him connected to the culture and tradition he was raised in.

Our day’s journey very much emphasized those connections, and consisted of three farm visits and a few social calls.

Our first stop was at a beautiful estate farm in the Northeast Corner. Angell characterizes estate farms as those properties owned by wealthier folks with a large amount of land and a desire to use some of that land for small-scale farming. Often, these estates hire full-time workers to manage the land and care for the animals, and those workers frequently come from the pool of inter-generational farming families that used to operate farms of their own.

Aside from the unending stares, everybody behaved themselves — shots were administered with minimal kicking and teeth were checked without biting. In addition to providing medical services, Angell also gave the animals’ caregivers advice on what feed to use, how much to give, and even where to buy certain products at a reasonable price.

The conversation between Angell and the property managers was easy and familiar, and the importance of maintaining good relationships is an element to his work that Angell considers both crucial to his success and one of the major perks of the job.

“I was taught pretty early on the value of developing a rapport with a client. You can’t treat the animal without the client.”

Angell’s range of clients means he often has to meet folks where they’re at in terms of the relationship they have to their animals. In addition to vocational farms, Bentley Veterinary works with three main types of clients: rescues and sanctuaries, backyard or estate farms, and equine organizations. An animal sanctuary may have thousands to spend on animal care, and a mission-driven investment in pursuing involved treatments. At a vocational farm, the reality can come down to economics, and many farms don’t have the money to spare.

Accordingly, Angell tries to approach every client with empathy and an understanding of where their decisions might be coming from, whether it’s a deep attachment to an animal or, sometimes, the lack of it. Developing a relationship with the person behind the animal helps him understand those perspectives and offer the kind of care that will align with their needs.

This clueing-in to the emotional component of veterinary medicine is an element to the job that Angell considers vitally important as well as often underemphasized.

“Unless you let it affect you on an emotional level, you’re not doing it right. You’ve got to have some sleepless nights, worrying about a case, or you’re not going to push yourself to become better quite as hard.”

Our day required little by way of difficult decisions —and on the estate farm, it was as clear as day that the property managers cared deeply for the animals in their charge. They worried after the right balance of feed to avoid bloat, mused on the personalities of the donkeys, and remarked on some of the humorous side effects of their job.

“Working with animals, you get used to a whole bouquet of smells you never thought you’d get used to. Knowing, ‘Oh, that’s not right!’ when you catch a hoof smelling a particular way.”