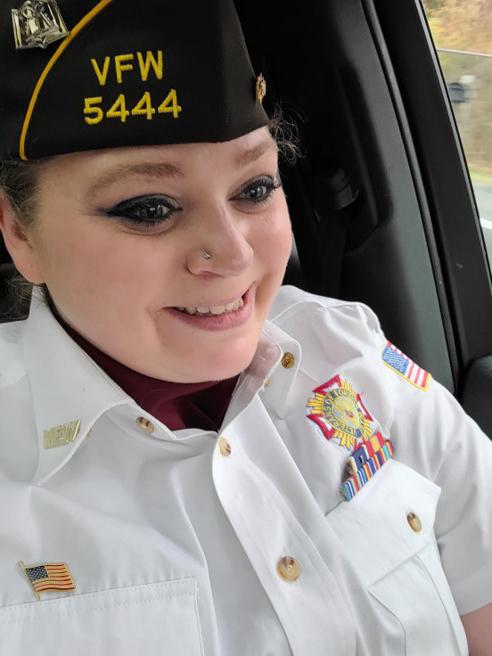 April 7, 2021
By
Whitney Joseph
editor@millertonnews.com
“I think it is a powerful thing in a way, to be an example for other females.” — VFW Post 544 Cmdr.-Elect, Maddie Fletcher

DOVER PLAINS — For the very first time in its 42-year history, a woman has been elected — with a unanimous vote — to lead the overwhelming male membership of the Veterans of Foreign Wars (VFW) Post 5444 in Dover as its next post commander. The official vote was held on Thursday, April 1, at the Post home on Route 22.

Fletcher, who is 34 and has been on the VFW’s roster for six years but an active member for only three, said she is “still kind of processing” what the promotion symbolizes.

Already having broken one record last year when she became the Post’s first female senior vice commander, Fletcher was nominated last month by Tod Humeston, a male member whom she described fondly as “one of the most rough and tough people” at Post 5444.

“And it was really funny,” she recalled, “because when they asked for nominations, I was a bit intimidated. Tod just yelled my name from behind me. I knew he was going to be my senior vice right then.”

In fact, she said despite Post 5444 being predominately male, with the military membership of 89 including only two females — including Fletcher — and the between 20 to 30 member Auxiliary being entirely female, Fletcher said she’s received an inordinate amount of support from both groups at Post 5444.

“When I came out of the room [that] night after the vote, I had a ton of people there to support me and cheer, and one of the people who came around, he gave me a little plaque that says ‘Girl Boss’ on it,” she said. “It’s nice to get that kind of reception. I still haven’t really processed the whole idea, but I think it’s good. I think it is a powerful thing in a way, to be an example for other females.”

Fletcher, who was born in New Milford, Conn., and raised in Brewster, moved to Dover when she was 13 and graduated from Dover High School. She served in the Navy aboard the U.S.S. Waft out of Norfolk, Va., for four years as a 3rd Class Cook CS3.

She also graduated from the Culinary Institute of America (CIA) in Hyde Park and has worked in 4-star restaurants but has since shifted gears and is now pursuing a teaching career; she will graduate from Dutchess Community College this semester and then transfer to either Marist College or West Conn.

In the meantime, Fletcher also bartends part-time at Post 5444, where she said she gets to hear all of the veterans share their war stories — a privilege and honor she treasures.

Mom to a 9-year-old daughter, Brooklyn, and 26-year-old step-daughter, Devanie, Fletcher said she and her husband decided to return to Dover to be close to her family, as her husband’s family is in Jamaica, too far away to consider living there.

The promotion will become effective on Thursday, May 6, when she takes her oath of office. It can set an important example — especially for Brooklyn — who is just learning that women earn less for doing the same work as men and often have less rights than their male counterparts, said Fletcher.

“I think it is great to be a role model for her, and for her to have someone to look up to who wants to help other veterans,” she said, noting she helps council other veterans struggling after returning from combat and works with the national Alliance for Mental Illness (NAMI) through its peer to peer classes. Fletcher also volunteers with the Homefront Program for friends and families of veterans and is a member of Student Veterans of America; she plans to speak to Congress in October about veteran issues on their behalf.

When asked what she would say to her daughter specifically about the historical significance of her promotion, Fletcher paused for a moment.

“I would say that we don’t have to limit ourselves, that we can push for the sky and there are no limitations on what we can do,” she said.

When asked if she ever encountered sexism when in the military, her response came much more quickly.

“One-hundred percent,” said the commander-elect. “When I first got in the military, having females on ships was a new thing. I entered the military in 2004; when I was in, we still weren’t allowed on submarines.”

Women weren’t admitted to the VFW for some time, either. In fact, according to the organization’s national website, www.vfw.org, “While female World War I nurses began qualifying for [VFW] membership in 1921 following the war, it wasn’t until 1978 that women were formally admitted to the VFW.”

The VFW goes back to 1899, “when veterans of the Spanish-American War [1898] and the Philippine Insurrection [1899-1902] founded local organizations to secure rights and benefits for their service. Many arrived home wounded or sick. There was no medical care or veterans’ pension for them, and they were left to care for themselves,” stated the website.

There are more than 1.5 million members of the both VFW and its Auxiliary today, it added.

The VFW and its Auxiliary advocate for many veteran issues; they helped pass the Veterans Access and Accountability Act of 2014 and continue to fight for improved conditions and services for men and women at VA medical centers.

The best part of her new command, said Fletcher, is continuing to promote Post 5444 — a place where she’s consistently found support — no matter her gender, no matter her young age (at 34 she’s one of the youngest veterans, if not the youngest, to ever take charge in Post 5444’s history) and no matter her title.

“The VFW, to me, is a place where veterans can go and find home,” said Fletcher, asking readers to be on the lookout for events and fundraisers in the near future to help back the organization. “We’re a program that supports veterans and supports our community, not only the veteran community but the community in general.”

To read our thoughts on Fletcher’s historic journey, turn to this week’s Opinion Page, Page B4.