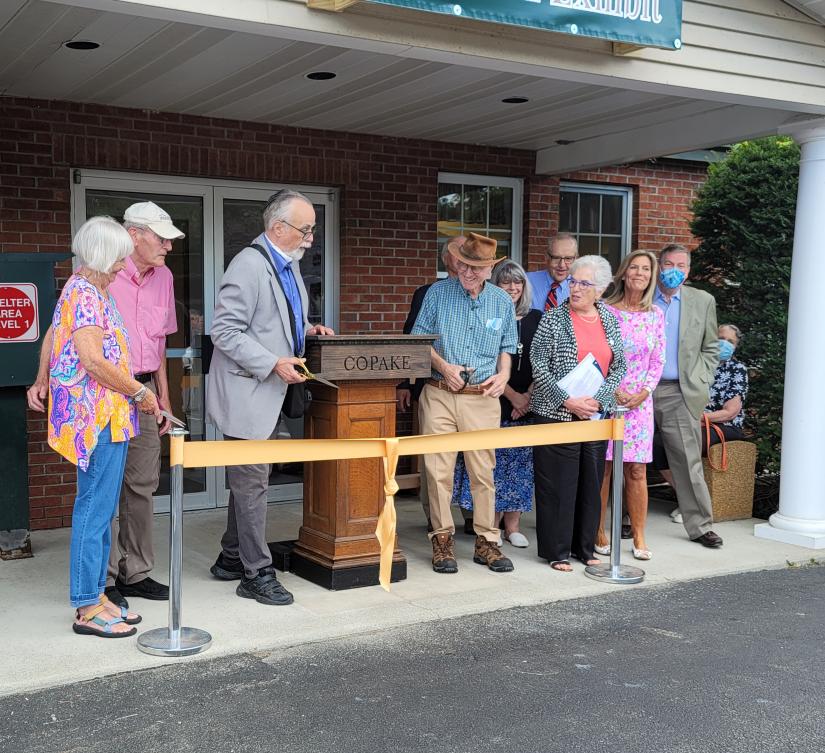 A ribbon cutting was held at Copake Town Hall on Saturday, Aug. 13, for the opening of the historical exhibit at Town Hall. Above, from left, town Supervisor Jeanne Mettler, State Senator Daphne Jordan (R-43), Town Historian Howard Blue and local artist Nick Fritsch were among those present. Photo by Judith O'Hara Balfe

COPAKE — There is an awesome exhibit at the Copake Town Hall — not to be missed. Fortunately, it is now a permanent display, welcoming all to the municipal building following a ribbon-cutting ceremony that was held Saturday, Aug. 13.

The exhibit brings an amazing history to light — expansive, curated in a manner that  honors each important town event on its own, with photos and text that’s easy to read.

The Copake Town Board pegged the project in early 2020. Blue wrote the texts and provided photographic images obtained from numerous Copake families; Hotaling served as a consultant. Fritsch did the artwork.

Town Supervisor Jeanne Mettler and many others in town also helped make the exhibit happen, and all were celebrated on the 13th.

Copake Town Hall is a light, airy structure, located at 230 Mountain View Road. It’s ideal for this type of exhibit.

Some of the historic events covered in the display include how five kidnapped Germans became leaders in Copake and how Chief Big Thunder (aka Dr. Smith Broughton) was arrested and given a life sentence during his anti-rent movement. Other panels depict local waterfall, Bash Bish Falls; the town’s ill-fated movie theater; and Elinor Mettler, founder and publisher of the former town newspaper, The Roe Jan Independent.

Former students from local elementary schools, some whose parents and possibly grandparents once attended school there, are among those featured in the panels. One highlights Howard McGhee, former U.S. post master and beloved coach.
Another panel answers the question if Winston Churchill had a Copake connection.

There’s information on Superman creator, Carroll Rheinstrom and his wife, Irene. The couple lived on a 1,000-acre plot of land in Craryville. The Rheinstroms were philanthropists who eventually willed their acreage to the Audubon Society.

Blue, a retired teacher and author, wrote about the superhero creator in the book, “Carroll Rheinstrom; the Man Who Sold Superman to the World.” He has done much research on these topics and more as the town historian.

Make sure not to miss two beautifully executed works by Fritsch that are hanging in the courtroom at the Copake Town Hall, behind the dais. The works are original. One depicts the “First Town Meeting, 1824,” the other is entitled, “Depot.” Both are on loan by Fritsch and not part of the permanent exhibit.

Those who visit the exhibit now will get to enjoy them, though, along with a large brass bell on display in the courtroom — a relic of long past days when horse racing and trotters were a part of life in Copake.

The display also includes enlarged postcards contributed by Robert Callahan; paintings on loan from William Clark Vreeland and Donna Louise Vreeland may also be viewed in the Rheinstrom Conference Room.

Many attended the grand opening on the 13th to enjoy the exhibit, with a great many were present from the Roe Jan Historical Society. So, too, was New York State Senator Daphne Jordan (R-43) and her staffer, Halie Northrup.

Funded by grants from the Rheinstrom Community Foundation and the Bank of Green County, the exhibit may be seen weekly, Monday through Thursday, from 6 a.m. to 4 p.m. and Saturdays, from 9 a.m. until noon.

Groups interested in viewing the exhibit may make arrangements through Town Historian Howard Blue at copaketownhistorian@gmail.com.