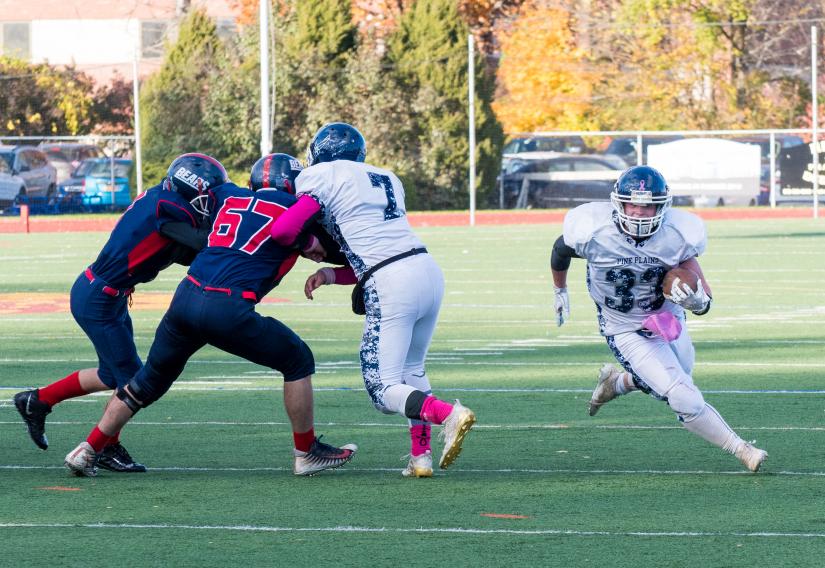 Members of the Pine Plains varsity football team put up a fierce front on the field during the 2018 football season, in the days before COVID-19. Archive photo by T.C. Morton

HARLEM VALLEY — Student athletes across New York State have been cautiously counting down the days until the fall sports season, in light of the COVID-19 pandemic. Some school districts haven’t even reopened their campuses, and all have been weighing the necessary safety precautions and potential scenarios for allowing athletics during the 2020-21 school year.

It was just a few weeks ago that Governor Andrew Cuomo announced that lower-risk school-sponsored sports in all regions were allowed to begin practicing and playing on Monday, Sept. 21, with travel for practice or play prohibited outside of the school’s region or contiguous regions or counties until Monday, Oct. 19. As published on his website at www.governor.ny.gov, lower- and moderate-risk sports include tennis, soccer, cross country, field hockey and swimming.

Also included in Cuomo’s announcement from Monday, Aug. 24, were guidelines for higher-risk sports, which can begin practice on Monday, Sept. 21, but can’t be played until a later date or Thursday, Dec. 31. With football, wrestling, rugby, hockey and volleyball featured in this category, Cuomo announced that practices for high-risk sports are limited to “individual or group, no- to low-contact training.” In addition to following the New York State Department of Health’s (NYSDOH) guidelines and implementing social distancing and face coverings, schools are required to limit the capacity of indoor facilities to no more than 50% occupancy; and no more than two spectators are allowed per player.

Harlem Valley school districts waited for guidance from NYSPHSAA to determine how to move forward with their 2020-21 athletic programs. In the North East (Webutuck) Central School District, in addition to NYSPHSAA, Webutuck Superintendent of Schools Raymond Castellani said he was waiting to learn the guidelines from Section IX Athletics and the Mid-Hudson Athletic League.

“When they give us the go-ahead, we would be happy to consider what’s safe and what’s not safe right now,” Castellani said in August, “but before that, all those layers above us have to have approvals first.”

In the meantime, area schools made great use of the waiting period by exploring different scenarios for hosting school-sponsored sports while adhering to the state’s conditions. During the Pine Plains Board of Education (BOE) meeting on Wednesday, Sept. 2, Pine Plains Superintendent of Schools Martin Handler presented three possibilities for sports this year. With the first scenario focused on following Cuomo’s plan and launching the program on Monday, Sept. 21, the second scenario proposed postponing the athletics program until Jan. 4, 2021 and then hosting three condensed sports seasons. The third scenario suggested starting the sports program on Monday, Nov. 30, and hosting winter sports in November, fall sports in March and spring sports in April.

“Frankly, most of the superintendents feel that basically starting at the end of September is too soon,” Handler told the BOE. “Schools are going to either full remote or hybrid [learning models] and that doesn’t make sense to have kids out on the athletic fields in a time when we don’t have them in the school learning.”

Though he said the district was taking the responsible position by considering postponing its athletic program to a later date, Handler noted during the meeting that the idea has caused a “firestorm” from parents who are upset about their children not being able to play sports.

On Friday, Sept. 4, NYSPHSAA issued a 49-page “Return To Interscholastic Athletics” document with recommendations for school districts on how to consider approaching school-sponsored sports once schools reopen. Using the definitions issued by the NYSDOH, the document stated that low-risk sports are characterized by the “greatest ability to maintain a physical distance and/or be performed individually” and by the “greatest ability to (1) avoid touching shared equipment, (2) clean and disinfect any equipment between uses by different individuals, or (3) not use shared equipment at all.” Likewise, moderate-risk sports are characterized by the limited ability to maintain a physical distance or avoid touching of shared equipment, while high-risk sports are characterized by the least ability to do either.

Under its recommendations for fall sports, NYSPHSAA suggested fall sports start Monday, Sept. 21; while the end date has yet to be determined, the fall sports season can’t exceed 15 weeks. Ten practices would be required for all fall sports with 12 practices for football and gymnastics and training for golf. Low- and moderate-risk sports (including cross country, field hockey, golf, gymnastics, soccer, girls swimming and diving and girls tennis) may practice and must play games within their section or league until Monday, Oct. 19; after that date, games may be played beyond a school’s section or league. High-risk sports (such as cheerleading, football and volleyball) may practice but may not participate in games. Organizing modified and junior varsity sports will be left to the individual school district’s decision, and there will be no regional or state championships.

For winter sports, NYSPHSAA recommended a revised start date of Monday, Nov. 30, and that the sports sections determine the end date, adding that the winter sports season can’t exceed 22 weeks. Spring sports may begin March 15, 2021, and cannot exceed 15 weeks; sports sections will determine the end date. The state championships for both winter and spring sports will proceed as scheduled, though that could change.

“It’s been quite a process with the section,” Millbrook Athletic Director Al Hammell remarked at the Millbrook BOE meeting on Tuesday, Sept. 8. “We’ve had meetings and discussions, but everything seems to be pretty hypothetical… It seems as though people within our section would like to try to get started, and many of our districts in our league in the Mid-Hudson Athletic League did vote for the option to start on Nov. 30.”

On Thursday morning, Sept. 10, the athletic directors from Section IX school districts voted to have Monday, Nov. 30, be the start date for interscholastic competition for the 2020-21 school year, starting with winter sports. All fall sports for Section IX have been postponed to March 1, 2021.

In a recent letter issued by Eugene Brooks Intermediate School Principal Matthew Pascale to Webutuck families, Pascale stated NYSPHSAA moved high-risk sports to March 1, while all other fall sports can begin on Monday, Sept. 21, for those sections that voted to allow the remaining fall sports to take place.

“This is not the answer we were hoping to play out,” Pascale wrote. “These decisions have left all school districts in Section IX without the option of playing the fall sports of soccer, field hockey, girls swimming, cross country, girls tennis and game day cheer until March… For Webutuck and the other member schools from Section IX, there was simply no tenable plan to allow student-athletes a return to school on Sept. 21 when students are on a distance learning plan.”

Regarding the start of the winter sports season, Pascale assured families and student athletes that Webutuck will update them on medical clearances, practices and games as soon as information is available.

“I look forward to getting the athletics component of education up and running and will continue to advocate on behalf of the Webutuck Warriors in all areas of athletic planning,” he stated.

In the Pine Plains district, Handler said, “We’re looking at what we want to do or not do with those programs because obviously we have to consider how many kids would be involved, how we would disinfect areas after use and all that good stuff. At least now we have a schedule where we can start our planning, and the nice thing about the schedule is while the seasons will be shorter than they would have been ordinarily, it looks like every student athlete will have an opportunity to participate in a sport or sports of their choosing.”

At the Millbrook BOE’s discussion, Hammell said, “In my mind, the biggest obstacle is if we come back hybrid: as long as the district is saying that we can have sports teams with a hybrid model, I can certainly devise a game plan for the winter sports to begin and to start as planned … Specific to our district, I think that’s going to have to be something that I can’t make that decision about whether or not we can mix kids on an athletic court or an athletic field when we’re doing a hybrid learning model. That would be something I would need some guidance on.”

Millbrook has since opted for a remote learning model for its student body.