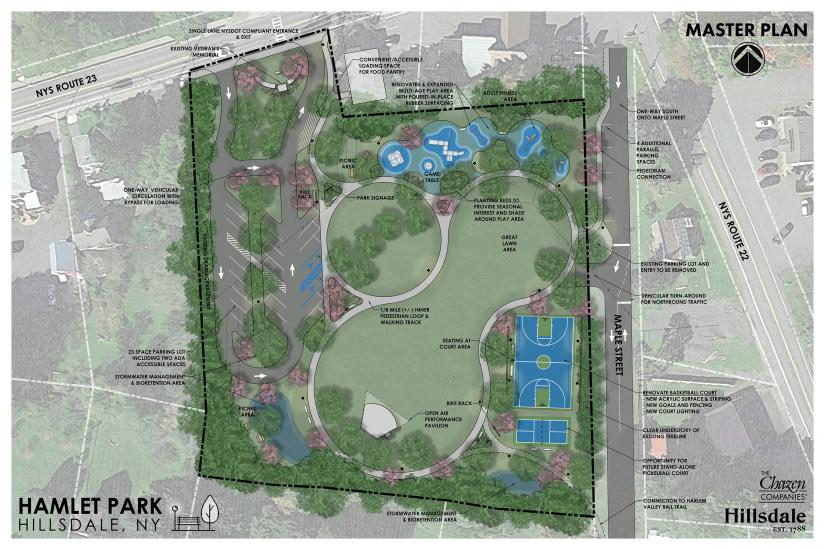 HILLSDALE — Promising new developments are in store for Hillsdale in the coming years as the Hillsdale Hamlet Committee is looking to start fundraising to benefit the up-and-coming redesign of its Hamlet Park, located at 9248 Route 22.

Hillsdale Hamlet Committee (HHC) Chair Shannon May explained the town identified the park as an under-utilized resource years ago. As detailed in its Comprehensive Plan, she said the town spoke about how wonderful it would be to redesign the park as a more essential part of the community. In 2019, the HHC took on the Hamlet Park restoration project, determining what would go into its redesign, all while keeping the Hillsdale Town Board informed.

For many who grew up in Hillsdale, the park represents an important part of their childhood, according to May. Though she said there isn’t much at the park to attract visitors now — there haven’t been any baseball games there in the last decade — May said there has been a growing number of families with young children that visit the park making new memories.

Parks the place to be

Especially during the COVID-19 pandemic, May said more people are using their local parks. She expects this renewed interest to only increase as more people get vaccinated against the virus, and she believes people hesitant about meeting indoors will continue to go to parks and gather outdoors instead.

“It’s about bringing the community together,” she said. “That’s why the Hamlet Committee and the Town Board have pursued this.”

“People have to see each other, even if it’s social distanced and outdoors,” agreed HHC Secretary Toby Butterfield.

After laying the framework for the restoration project in 2019, the HHC hired Chazen Associates, a landscape architectural firm, in 2020 to do a master plan of the park. By the later half of that year, the committee did public outreach with Chazen Associates to get input from the community about what features it most wanted in the park. A survey was also sent out to solicit additional community feedback, and the committee held an in-person public meeting in the fall of 2020.

Once Chazen Associates designed the master plan, the committee presented the plan to the public for review. The Hillsdale Town Board approved the plan’s final version at its meeting on Tuesday, Feb. 9.

Among some of the features the community requested in the redesign that were highlighted in the master plan were a renovated basketball court; a renovated and expanded multi-age play area; a play area surrounded by shady areas and garden beds; a pickleball court; a connection to the Harlem Valley Rail Trail; and other features that promise to enhance the park in its entirety.

The projected cost for the project has been estimated at $1.4 million. A PDF version of the plan can be found on the town’s website, www.hillsdaleny.com.

Fundraising in the works

As of this time, the HHC is now working on developing a fundraising strategy that will include appealing for private donations and applying for state and federal grants.

Since the goal is to fund the park in its entirety though such sources to ensure no tax dollars are spent, May said the committee hopes to secure most of the project’s funding through both state and federal grants and private foundation grants as well as by reaching out to the community for private donations.

“We know the components of what we’re going to be pursuing in terms of grants,” May said, “and so we expect this year our focus will be on fundraising as well as community events to gather support and attention for the project and just to give people opportunities to get out and come together as a community.”

May said the committee will be brainstorming ways of asking for donations from the community. She added the HHC’s goal for next year is to have the funding available so it can begin building, with hopes of finishing construction at the end of 2022.

To help garner the public’s interest in the park’s redesign, the committee is developing plans for community events. Coming later this spring, the committee will present a free Jams in the Hamlet concert series in the park. The series’ premier event will be Saturday, May 15, and feature the bluegrass music of the Sleepy Hollow String Band. Starting at 4 p.m. with pre-show fare from local restaurants, the free concert will run from 5 to 7 p.m.

Looking ahead, May said they hope to have a Flea Market Day in the park, perhaps even a car show and a children’s activity day, though they’re still figuring out the details.

Anyone interested in learning more or getting involved with the project is invited to contact the HHC at HillsdaleHamletCommittee@gmail.com.