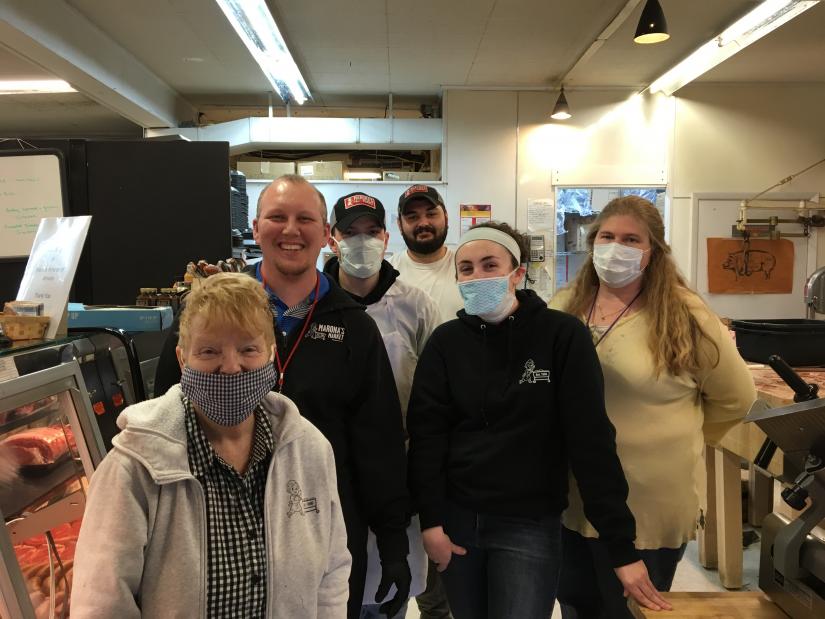 Located at 32 Front St. in Millbrook, the staff at Marona’s Market has been taking the necessary precautions to keep safe and healthy as it continues working at the grocery store during the COVID-19 pandemic. Photo submitted

Grocery stores, pharmacies busier than ever as they deal with pandemic

HARLEM VALLEY — Supermarkets across the Harlem Valley are working overtime, trying to keep their staff and customers safe, their stores sanitized and their shelves stocked during the coronavirus pandemic. Likewise, local pharmacies are making sure residents can access their medicine and other vital supplies, even as they struggle with shortages of sanitizers and other products.

The Millerton Mercantile, located on Main Street in Millerton, offers fresh groceries from local suppliers, particularly eggs, bread and milk. At this time, the store’s hours of operation run from noon to 6 p.m. on Fridays through Sundays; call 518-796-3694 for details.

At this time, CVS Pharmacy — there’s one in Millerton and one in Dover Plains — declined to comment about how it’s faring during the pandemic.

In an informational video entitled, “Preparedness for Coronavirus at PSK Supermarkets — Foodtown — Freshtown — Pathmark” that was posted on YouTube by PSK Foods, Daniel and Noah Katz, co-presidents and CEOs of PSK Supermarkets, shared the precautions they’ve taken to stop the spread of COVID-19 at their stores, like Freshtown of Amenia.

“We never stop training staff on all these proper cleaning procedures,” he said.

As far as inventory is concerned, Katz said the store is fully stocked and has ordered extra hand sanitizers and other sanitizing products including hand gloves for staff and lots of soap, delivered regularly.

For customers looking to shop from home, PSK Foods has partnered with the retail company Instacart to provide deliveries. Customers can go online to www.Foodtown.Instacart.com to shop and have their food delivered within an hour.

With regards to their plans to remodel the Amenia store, Daniel Katz said they’ve already started working on the remodel and that the work will continue at night so it doesn’t interfere with customers’ shopping.

“We are fully committed to the Amenia and Millerton community and greatly value the business and support that we receive,” he said.

Along with observing an influx of customers from New York City, Kelly Rowe, Benzer Pharmacy store manager, said its toy section has been doing very well, given the number of children now at home due to the pandemic. Likewise, condoms and the morning after pill (known as Plan B and other generic versions of the pill) are selling well.

Though Rowe confirmed that the pharmacy has enough medicine and antibiotics to treat those who are sick — including inhalers, nebulizers and insulin for individuals with diabetes — she said many over-the-counter items are hard to come by since people have been stocking up. Items such as Tylenol, face masks, gloves and thermometers as well as aloe vera gel and rubbing alcohol, which can be mixed together to make a homemade hand sanitizer, are a rarity. Though supplies are delivered daily, Rowe said there are not enough supplies to keep up with the demand.

She added employees are wearing gloves and disinfecting the store regularly. The store’s surfaces, such as the credit card machines, are cleaned and sanitized as well.

It’s been so busy, Rowe said, that the store needs to hire a pharmacy technician, a customer service representative and a driver.

Given the rush of customers shopping, no one at Peck’s was able to comment for this article.

Located up the street, also on Route 199, the Pine Plains Pharmacy is providing the community its prescriptions and more.

“We are doing our best and dealing with a lot of shortages in keeping the community safe,” Nasir Mahmood, pharmacy owner and supervising pharmacist, said, “and I think so far we have been successful in doing that.”

As the pharmacy tries to manage a shortage of hand sanitizer, rubbing alcohol and toilet paper on a day-to-day basis, Mahmood said it receives such supplies “once in a while” and tries to limit customer purchases of such items to avoid running out so quickly. While it’s doing well with its current supply of medication and hasn’t experienced any shortages, he noted, “You never know what tomorrow brings.”

Mahmood said he’s asking customers to respect the recommended distance of 6 feet between people in order to keep employees safe. Additionally, the pharmacy sanitizes all surfaces and equipment every hour, from the door knobs and counters to the telephones and signature pads. Employees are wearing masks and gloves and have been asking customers to keep their distance while waiting for medication.

With a total of eight employees, the pharmacy is fully staffed. Hours of operation run from 8:30 a.m. to 7 p.m. on Mondays through Fridays, from 9 a.m. to 2 p.m. on Saturdays and closed on Sundays.

In the village of Millbrook, Marona’s Market has been doing fairly well during the pandemic, according to store manager Pam Smith.

“I have been in business in this area for over 20 years,” Smith said, “and I have connections to help us keep well-stocked with produce and meat. The only thing we’re lacking is cleaning supplies, sanitizers and paper towels.”

Running from 8 a.m. to 7 p.m. every day on Front Street, Marona’s Market has roughly 20 employees. To keep the store protected during the pandemic, Smith said it has hired a cleaning crew to come in five mornings a week to sanitize the store. The store also buys hand sanitizer from the local company, Smells Good. All of its employees now wear gloves that they change frequently and have masks to wear over their faces. Social distancing recommendation are also enforced, especially at the register when people are checking out their groceries.

Located on Franklin Avenue, the Millbrook Pharmacy has kept its regular hours intact and is open from 9 a.m. to 6 p.m. on Mondays through Fridays, from 9 a.m. to 4 p.m. on Saturdays; it’s closed on Sundays. The pharmacy has three employees at this time and doesn’t see a need for more. All of the employees now wear masks and gloves and practice social distancing.

Though it has enough medicine in its inventory, pharmacy manager Sonny Shah said the store is low on hand sanitizer, rubbing alcohol, Vitamin C and Airborne. The pharmacy has also shifted to curbside service, so customers will need to call 845-677-3131 for prescription refills. Customers may also order their medications at www.themillbrookpharmacy.com.

On Sunday, March 29, Governor Andrew Cuomo announced all pharmacies in New York will now offer free home delivery of medications, and local pharmacies are working to comply. After speaking with the state’s major pharmacy chains, pharmacies have agreed to do so to help reduce long lines at their facilities.