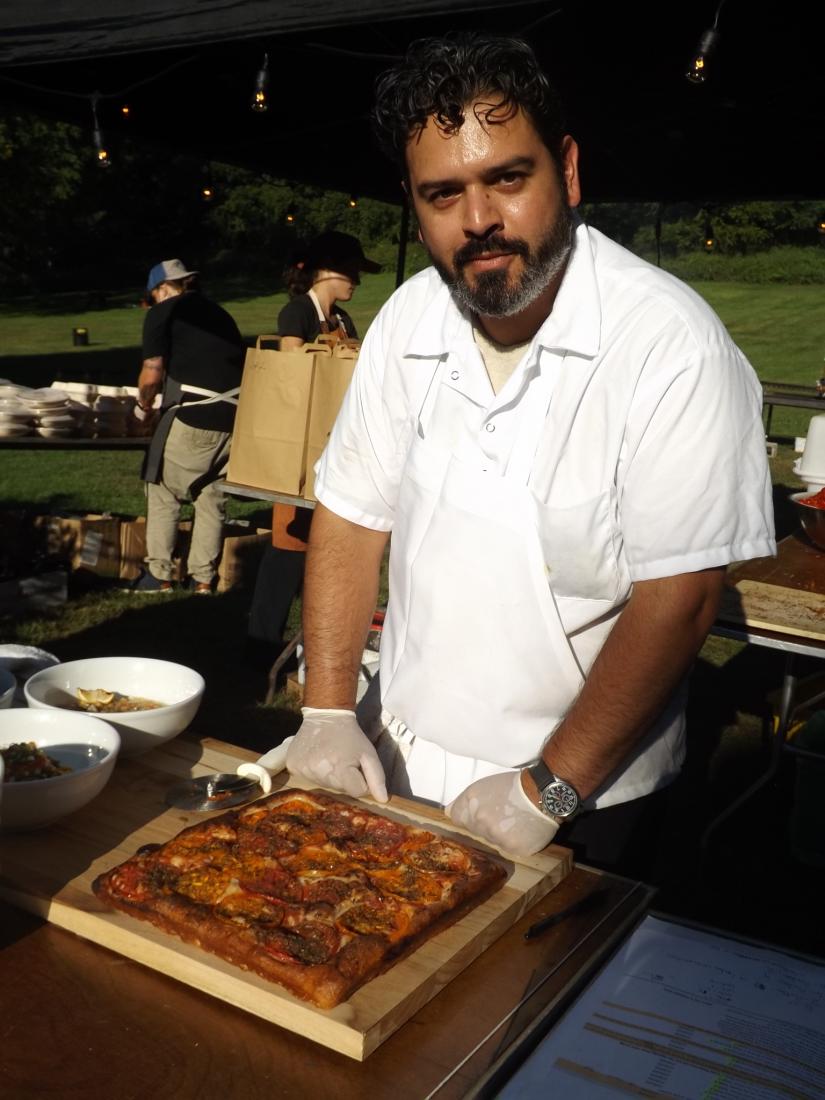 Visiting from Otto’s Kitchen in Germantown, Chef Bobby Hellen was spotted cooking up a storm at the Winner’s Dinner held on Saturday, Sept. 4, as part of this year’s Grillsdale festivities. Photo by Kailin Lyle

Grillsdale 2021 embraces grills and thrills on a smaller scale

HILLSDALE — Though attendance was lighter and the festivities were spread out over two days instead of one spectacular night, the sensation of area residents and visitors coming together to enjoy a weekend of first-rate food and entertainment was felt just as strongly at Grillsdale 2021 this Labor Day weekend as it’s been in years before.

The Grillsdale festivities kicked off on Saturday, Sept. 4, with a Winner’s Dinner with Chef Bobby Hellen from Otto’s Market in Germantown. Tickets sold out for the dinner long before Saturday arrived, and guests were given the option of ordering takeout dinners or enjoying the meal at Taconic Ridge Farm in Hillsdale, starting at 4 p.m.

After parking their cars in the field near the farm entryway, Grillsdale guests tread the path through the trees, over the bridge and up the bend in the direction of the venue. Once they reached the top and took in their surroundings, their faces lit up as they allowed themselves to be enveloped by the evening of late summer thrills and grills among new friends and familiar neighbors.

Music played  from the main barn to set the scene, as guests were spotted wandering among the meadows, admiring the view with their partners, children, friends and even their dogs.

Drawn in by the appetizing aromas drifting from Chef Hellen’s tent, hungry diners walked by to get a closer look at the dishes being prepared and their mouths soon watered at the sights and smells of the dishes that were being cooked, packaged and served.

Underneath the shade of a long barn, guests quenched their thirst at the bar and observed the festivities from the sidelines. When it came time to eat, they had the option of dining at the tables set for them on the grass or enjoying a picnic dinner.

Praising Taconic Ridge Farm as having “pockets of moments everywhere,” Joanna Virello, who organized Grillsdale with her partner Barbara Olsen Pascale, said the scenery and the food were “a marriage made in heaven.

“Grillsdale is the wedding I never had,” she added.

After holding a successful Grillsdale at Taconic Ridge Farm last summer, Virello and Pascale approached the farm for this year’s event.

“This is sort of a way of Joanna and Barbara keeping Grillsdale alive with an abbreviated version of what they’ve done at Roe Jan Park,” said Jim Carden, one of Taconic Ridge Farm’s owners. “We really miss the big event at Roe Jan Park and all the chefs… but as an alternative event, we were super excited about it and being able to host.”

The next evening, Sunday, Sept. 5, guests were invited to dance the night away at the Honky Tonk Barn Dance held from 4 to 9 p.m. With the band, The Juke Drifters, supplying the music, folks cut loose and savored the last traces of summer as they learned how to line dance to live music with friends.