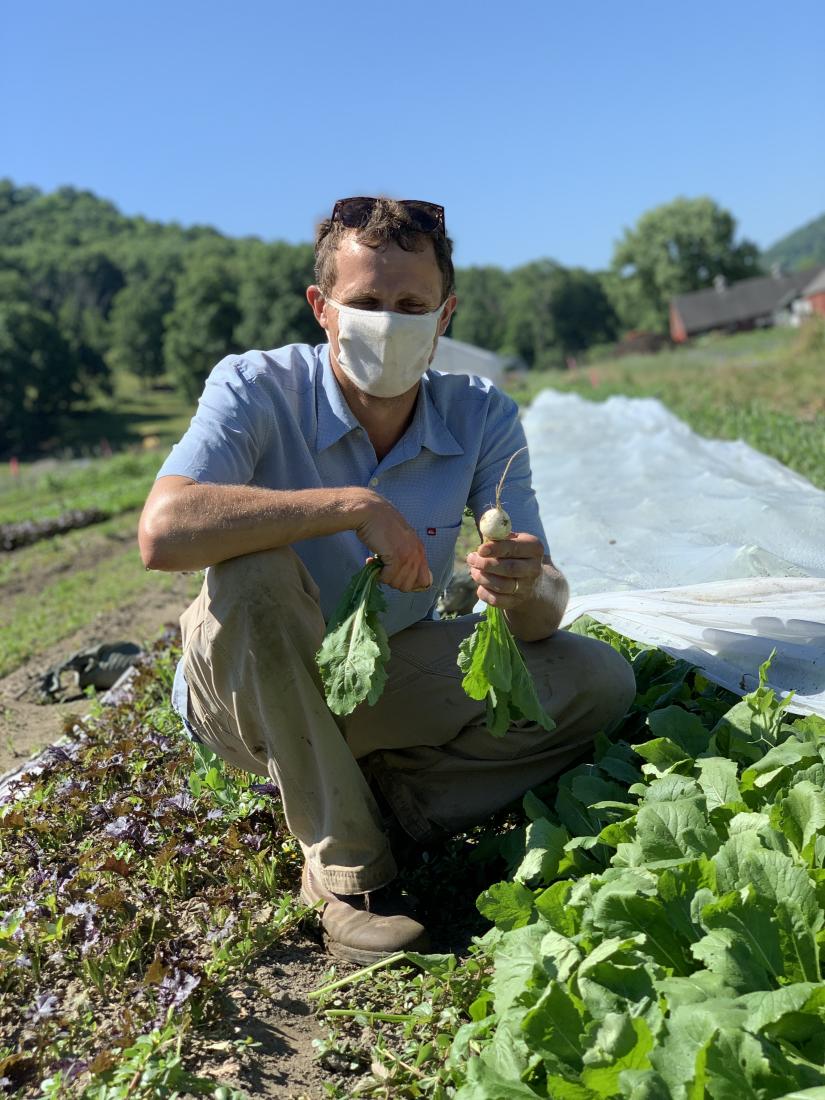 Harlem Valley Homestead in Wingdale has been donating fresh produce to the Farm to Food Pantry program, through which it goes to local food lockers, thereby contributing to the farm’s mission of creating an access point for fresh, local food for the community.  Photo submitted

HARLEM VALLEY — Now more than ever, access to fresh food is an essential to staying healthy during the COVID-19 pandemic. Through the Farm to Food Pantry program launched this past summer, area farms and food lockers have been working in tandem to address this need, making sure local residents can access healthy farm-fresh food through their local food banks.

How farms are filling pantries

As noted on its website, www.farmtofoodpantry.com, the program recruits individuals interested in helping their communities “feed the hungry and malnourished by helping local farms to donate their products to nearby food pantries.” In a nutshell, the program aims to make healthy eating a lot easier for people who aren’t able to access it, said Farm to Food Pantry Program Coordinator Nicole Zlotnikov.

Starting in June, Zlotnikov said program volunteers have gone around to local farms to collect donations of fresh produce and other products to bring to nearby food banks, including the Pawling Food Bank and the Dover Plains Food Pantry. Since the program first took off, they’ve approached Harlem Valley Homestead in Wingdale, McEnroe Organic Farm in Millerton and Zfarms and the Community Action Partnership for Dutchess County, both in Dover Plains. To date, the program has received donations of fresh produce, eggs and bread, though Zlotnikov noted, “We honestly take whatever they can give us — whatever they don’t sell, we take it.”

As for the volunteers, Zlotnikov said they usually meet every one to two weeks, though it all depends on how much food there is to collect from the different farms. Some weeks, the program requires less volunteers, though volunteers are typically emailed a couple of days in advance before the weekend schedule is sent out. Gathering at around 9 a.m. on Saturday mornings, volunteers are divided into groups and sent out to the farms to collect the donations. Afterward, the volunteers meet at the chosen food pantry, where the food goes to low-income residents.

While the program strives to vary which food banks get the donations each week, Zlotnikov said if they collect enough food, both food pantries get donations that day.

Volunteers looking to help can donate their time and efforts by working at participating farms, where they can harvest the produce, glean the fields post-harvest and cull the waste binds. Volunteers can also collect unsold fresh produce at local farmers markets and deliver the collections to the food pantries. That work is slowing down now that it’s fall.

When asked about any concerns related to recruiting volunteers during a global pandemic, Zlotnikov acknowledged that there were some as far as having to maintain a 6-foot distance between workers and making sure everyone wore masks. Otherwise, she said that it’s worked out well with volunteers working outdoors and taking their own cars to collect donations.

“I think it’s great,” she said about how the program’s fared so far. “The amount of volunteers and the amount of time that we’ve donated has been very helpful and I’m grateful for the volunteers that came and helped us.”

Throughout the summer months, the Farm to Food Pantry program flourished with farms donating their extra vegetables and a total of seven volunteers working together to collect food donations. Now that the main growing season has come to an end, the program is down to two volunteers and donations are starting to dwindle.

Looking ahead, Zlotnikov said she hopes they’ll have more volunteers join the program as they recruit more farms. As another goal, she explained that she’s trying to make the Farm to Food Pantry program year-round, if possible. However, she acknowledged that it might not be possible since it depends on the kinds of crops that grow over the various seasons.

Reflecting on why a program like this is crucial in these unprecedented times, Zlotnikov pointed out that many people aren’t able to access the food they need and that going to the supermarket can be a struggle. The program also helps address the issue of food waste as farmers donate food they might normally throw away to people who need it.

“It connects individuals that would like to help their communities to feed the hungry and helps local farms to donate their food products to local food pantries,” she said, “and the volunteers spend time outdoors working with local farms and connecting with others to do something good for someone.”

Given the lack of supermarkets and grocery stores in some local towns, like Millerton and Dover, Diana Zlotnikov, owner of Zfarms, said people have called Dover Plains a “food desert,” since they have to travel to other areas — sometimes many miles away — to find healthy, nutritious food.

To that end, many people, particularly those with lower incomes, rely on the local food pantries for their nutritional needs, though she pointed out that even the food pantries don’t have always have a good supply of fresh products, and are instead supplied with preserved and canned products.

Recognizing the program’s goals in helping to prevent food waste on farms and connect farms with food pantries, Diana said Zfarms has been donating vegetables, berries, meat, poultry and eggs to the Farm to Food Pantry program. When asked what she, as a farmer, gets out of participating in the program, she said, “[I get] this actually incredible feeling that you can substantially help with something; that you can help to prevent malnutrition; that you can prevent food-based wasting; that you can prevent the carbon footprint of the food locally and helping the global ecology and climate as well.”

Diana also stressed the tax benefits farmers receive by making donations to their local food pantries. According to the New York State Department of Taxation and Finance website, www.tax.ny.gov, New York State farmers can claim a refundable tax credit for qualified food donations made to a food pantry, food bank or other emergency food programs.

This credit is equal to 25% of the fair market value of qualified donations with a maximum benefit of $5,000 per year, and is available to farmers whose income is primarily attributed to farming in the state. Examples of eligible donations include fresh fruits, vegetables, eggs and meat grown and produced in New York State.

To participate in the program, go to www.farmtofoodpantry.com and click on the “Join the Community” button.