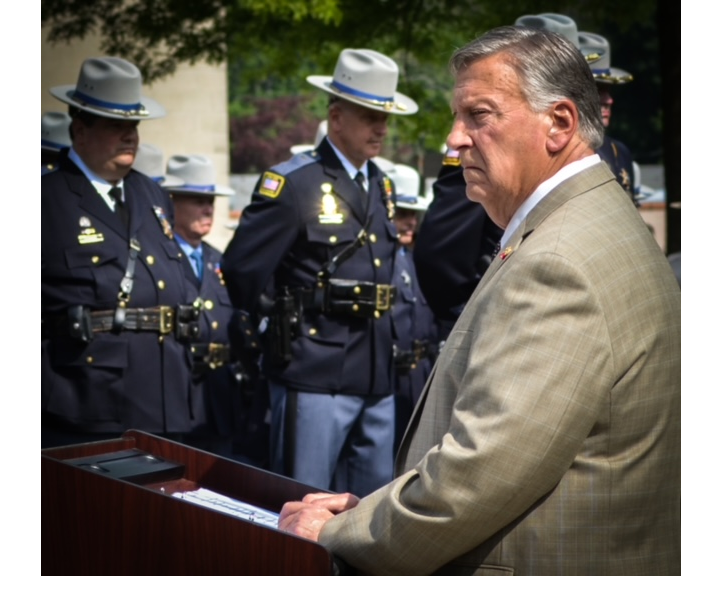 PAWLING — After more than 50 years of keeping the residents of the Hudson Valley safe, Dutchess County Sheriff Adrian “Butch” Anderson passed away on Wednesday, Sept. 29, at his Pawling home.

While the cause of death for the 73-year-old six-term sheriff was not released, those who knew and worked with Anderson remembered him with great fondness and admiration.

Anderson actually started his career in law enforcement locally in the northeastern part of the county. He worked primarily in the Harlem Valley area as a Deputy Sheriff with the DCSO in 1970.

He was subsequently promoted to detective and assigned to the Major Case Squad. With his investigative career going well, he soon became a police instructor.

In 1977, Anderson’s career forged ahead and he graduated from the Federal Bureau of Investigations (FBI) National Academy in Quantico, Virg., accepting many accolades and awards along the way.

In 1993, Anderson was appointed undersheriff. As such he was responsible for  the day-to-day operations of the Law Enforcement and Correctional Division at the Sheriff’s Office.

In addition to his law enforcement career, he served as the mayor of the village of Pawling for eight years. He also served on numerous boards, community and charitable organizations.

Anderson leaves behind a wife, Danielle Anderson, and his children.

“It has been an honor to be married to Sheriff Butch Anderson and the 300,000 residents of Dutchess County,” said his wife in a statement through the DCSO. “He was a tremendous husband, father and friend to all. Our family appreciates the outpouring of support from everyone as we grieve our loss.”

Dutchess County Executive Marc Molinaro, who ordered flags at all county facilities be lowered to half-staff and that the County Office Building be illuminated in blue lights in honor of Andersonfollowing his death, also spoke  in praise of his friend and colleague.

“Butch devoted his entire life to protecting and serving the community he loved so dearly,” stated Molinaro. “He was my friend, a mentor and I loved him like an uncle. Butch Anderson was truly ‘second to none’ and we will honor him by following his example and he only asked of all of us, to ‘treat others the way you want to be treated.’”

Imperati has taken charge as acting sheriff, and will remain so until Democratic Governor Kathy Hochul finds a replacement for Anderson.

It’s uncertain if the governor’s appointee will serve the remainder of Anderson’s four-year term, which was slated to end on Dec. 31, 2023, or if a special election will be called for before then.

Funeral arrangements for Sheriff Anderson were under the care of the Timothy P. Doyle Funeral Home in Poughkeepsie. His funeral was held on Wednesday Oct. 6; tributes may be made at www.doylefuneralhome.com.