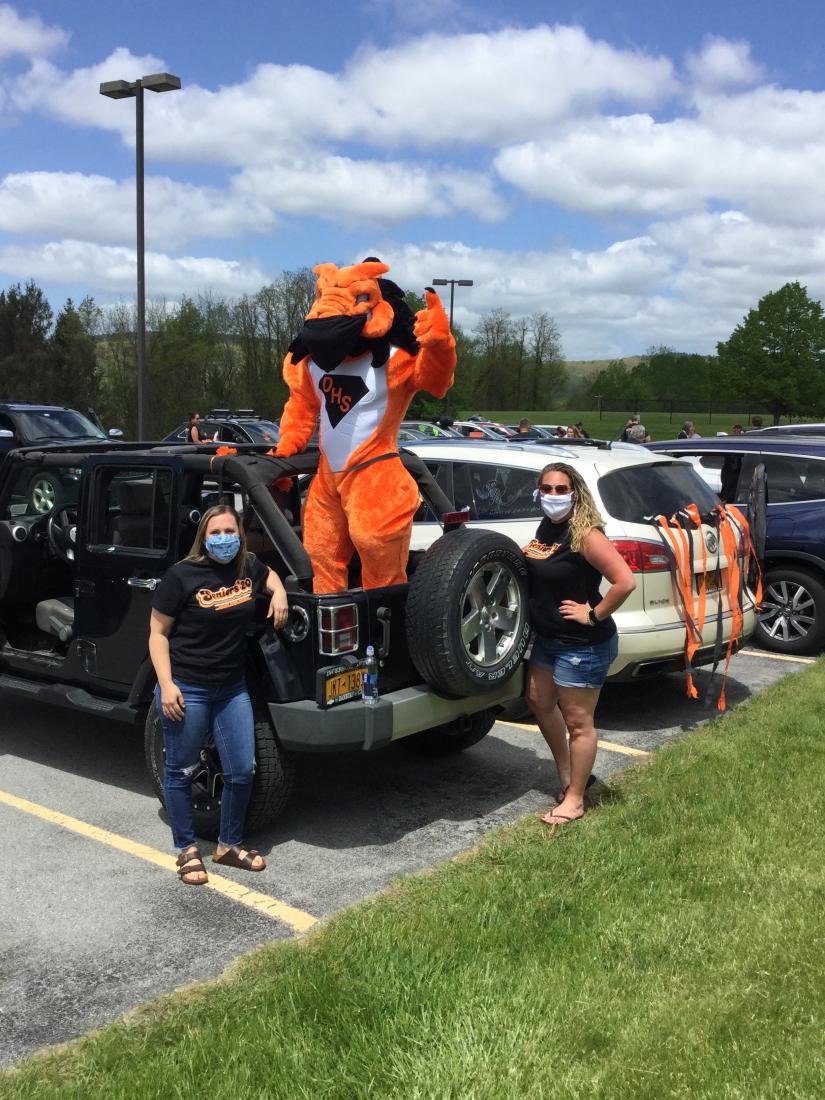 May 27, 2020
By
Kaitlin Lyle
kaitlinl@millertonnews.com

DOVER PLAINS — In a joint effort to give this year’s graduating seniors one last hurrah before graduation, the Dover High School faculty banded together to organize a parade to the homes of the members of the Class of 2020 on Friday afternoon, May 22.

Organized by Dover High School faculty members Emily Krieger and Amanda Davies-Bogin, the idea for the parade sparked during a brainstorming session among the staff held virtually on Google Meet. Along with decorating their own cars for the parade, the faculty reached out to Dover’s J.H. Ketchum Hose Company, the Dutchess County Sheriff’s Office and the New York State Police to have them participate.

Totaling 111 graduating seniors, the plan was to drive to each student’s home and present them with their own Class of 2020 lawn sign, a senior T-Shirt and other goodies. Dover High School Principal Eugenia Angelis also presented them with their caps and gowns. Though the students were instructed to be at home that Friday, they were otherwise unaware of the parade of decorated cars, school buses and firetrucks headed their way.

“I think they missed out on so much and this is one way to honor them and give them an experience we hope they’ll really remember,” said Dover Union Free School District Assistant Superintendent Donna Basting just hours before the parade.

District Registrar Robin Conklin agreed that the parade was a much-needed boost for the Class of 2020, which she said has been through a lot this year with the COVID-19 pandemic shutting down schools statewide and canceling traditional graduation plans.

“So, it’s nice,” said Conklin, who was also on school grounds Friday morning making preparations for the parade.

Starting at 11 a.m. on Friday morning, the faculty gathered in the parking lot in front of Dover High School to decorate their vehicles for the parade. Before long, there were rows of automobiles decorated with balloons, signs, banners and even an inflatable dragon — the school’s mascot -— most of which were in the dressed in the orange and black school colors. Teachers sketched congratulatory messages in washable marker on the windows of their cars, while others set up the students’ photos on the school lawn. Trailing behind the vehicles on a string, a clatter arose from the dozens of cans teachers festively fastened to their car bumpers.

By noon, all of the finishing touches were in place, and the teachers hopped in their vehicles and readied themselves for the signal to start. Led by a school bus bearing an enormous congratulatory banner, everyone made their way down the long campus driveway and headed out on the open road in the direction of the seniors’ homes, scattered throughout Dover Plains, Wingdale, with some even residing in Wassaic and Millbrook, raising a cacophony of honking along the way.

According to Angelis, this year’s graduation will be a hybrid between a virtual ceremony and a drive-in theater experience held on the high school campus on Saturday, June 27.