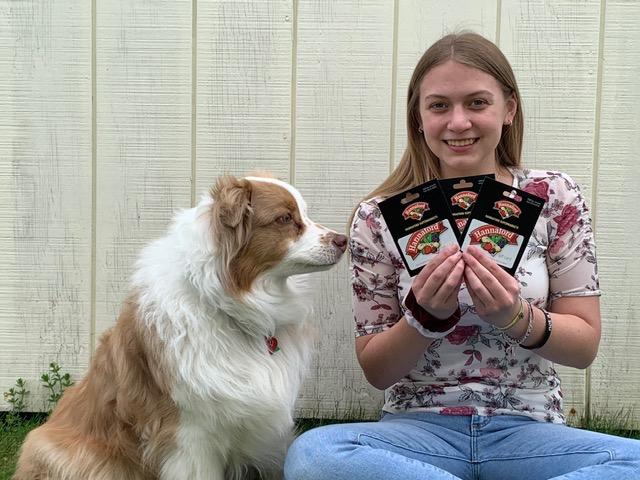 Photographed with her Australian Shepherd, Lily, Paige Arent, 14, of Stanfordville decided to help families in need by setting up a GoFundMe page so she could purchase gift cards to send to families struggling to support themselves during the coronavirus pandemic. Photo submitted

May 20, 2020
By
Kaitlin Lyle
kaitlinl@millertonnews.com

STANFORDVILLE — After watching her mother field endless calls from people struggling to support their families during the coronavirus pandemic, Paige Arent, a freshman at Stissing Mountain Junior/Senior High School, stepped forward to create her own fundraiser for local communities, to purchase gift cards for families in need during the COVID-19 health crisis.

A resident of Stanfordville, Paige, 14, said she was motivated to set up a GoFundMe page after hearing her mother Anne take unemployment calls for her work as the director of community affairs for Assemblymember Didi Barrett (D-106). Throughout the day, Paige said she heard stories of people struggling financially who were unable to support their families as a result. Wanting to help, she created the GoFundMe page “Donation Funds for the Unemployed in New York” last month.

As written on her GoFundMe page, Paige said her intent is to raise funds to go to the unemployed people of New York in and around the towns of Stanfordville and Pine Plains. Though Paige initially launched her fundraiser with the goal of raising $1,000, the responses she received put her up to $1,710 by Tuesday, May 12, and the fundraiser has continued to grow with each donation. Excited by the community’s immediate response to her project, Paige has responded to their generosity by personally sending out emails to the donors to thank them.

When asked what inspired her to channel the funds into gift cards, Paige said, “I figured it was the best way to distribute the money that was donated, especially because a lot of people near here go grocery shopping and could use the funds to support their family.”

Having done the math, she explained that $100 can hopefully get a family enough food for at least a week. She added that in addition to food, families can purchase hygiene products from the supermarket and other items they might need to support themselves.

Paige said she also received a donation of gift cards for Stewart’s Shops in Pine Plains, which she said can be used for purchasing gas. With the money she’s raised so far, Paige said she’s been able to purchase around 10 cards and hopes to get many more. Each family will receive one $100 gift card to Hannaford Supermarket and one $10 gift card to Stewart’s Shops. After negotiating with the managers at Hannaford Supermarket, Paige acquired two additional $25 gift cards from the supermarket for her project.

As far as finding recipients, Paige said she’s reached out to the town supervisors in both Pine Plains and Stanfordville. Respecting the privacy of those in need, she explained that once the supervisors contact her with the names of the individuals, she sends the supervisors the gift cards to distribute to those families. As her fundraiser continues to receive donations, Paige said she can start expanding her project to other surrounding towns.

Impressed by her daughter’s initiative, Anne, who is vice-president of the Pine Plains Central School District Board of Education, marveled at the diversity of people who have contributed to Paige’s fundraiser.

“It’s been a lot of local people and people who live far away that have been giving, which is really impressive,” she said, adding it means a lot to see people giving back to their communities at this time.

“It’s all been her — she has been doing all of the contacting,” Anne said.

To make a donation, go to www.gofundme.com/f/donation-funds-for-the-unemployed-in-new-york.