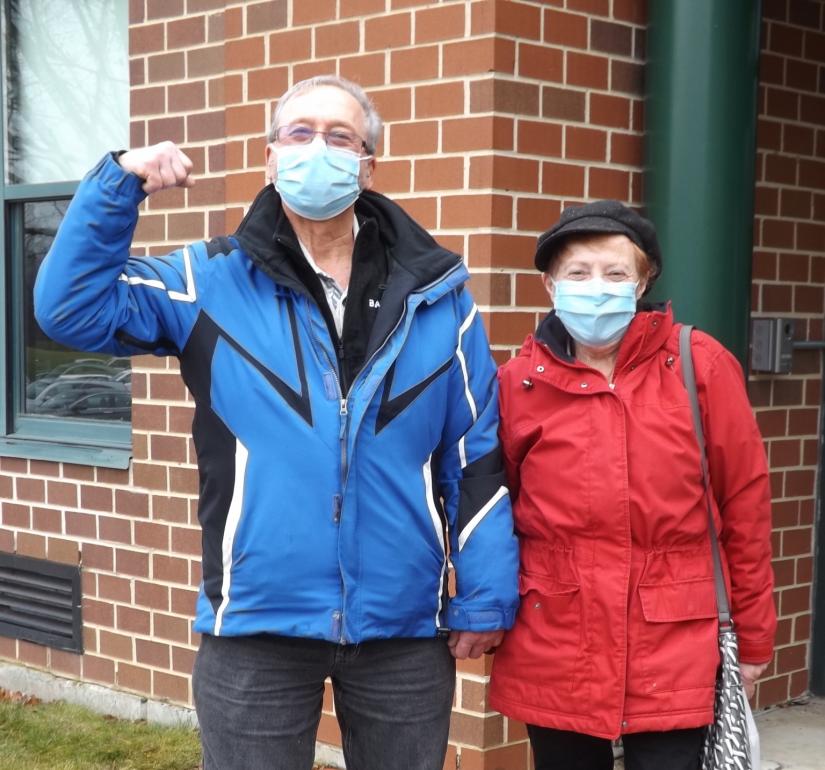 A resident of Middletown, Joseph Albanese posed beside his wife, Barbara, for a post-vaccination photo after receiving the Pfizer version of the COVID-19 vaccine at the Dover Middle/High School, a county distribution site, and the only one in the Harlem Valley. Photo by Kaitlin Lyle

DOVER PLAINS — Almost one year after the coronavirus was declared a global health crisis, the United States has begun vaccinating its citizens, though the rollout has not been without problems, including here in New York State. Both the Moderna and the Pfizer vaccines have been available for eligible residents in phased priority groups at vaccination sites statewide, but it’s become increasingly difficult for state and county officials to get their hands on supplies of the vaccine.

The vaccine is currently available for eligible New Yorkers in the Phase 1a and 1b groups, which include high-risk hospital employees, residents and staff at nursing homes, urgent care providers and other healthcare workers. Starting Monday, Jan. 11, Governor Andrew Cuomo announced the vaccine became available to individuals over the age of 65, first responders, police and investigators, teachers and education workers, public transit workers and public safety workers.

Addressing the vaccine in his 2021 State of the State Address on Jan. 11, Cuomo emphasized that the federal vaccine supply needs to increase, stating that there are currently 1 million doses in New York for over 4 million eligible residents and that the state only receives 300,000 doses per week from the federal government. At that rate, he said it will the state 14 weeks just to receive enough dosages for those who are currently eligible.

Cuomo said the state is scheduling appointments weeks into the future, though he said it “would rather have people signed up and awaiting the vaccine than have the vaccine awaiting people. I understand millions of people want the vaccine today, but we must be patient, even though it is an impatient time.”

Recognizing New York’s distribution lags, county officials have been doing their utmost to keep the public informed and ensure those who are eligible can access the vaccine.

At the Millbrook Village Board meeting on Wednesday, Jan. 13, Dutchess County Legislator Deirdre Houston (R-25) told residents “the federal government won’t be holding the second dose, but will release all the vaccines,” and that it’s also looking at the Johnson and Johnson vaccine, which has not yet been approved.”

As of Sunday, Jan. 17, according to New York State’s COVID-19 Vaccine Tracker of healthcare distribution sites statewide, the Mid-Hudson Region had received 111,925 total doses of coronavirus vaccines and administered 78,291 total doses, which equates to 70% of those doses being administered.

According to the Dutchess County COVID-19 Community Impact Dashboard, as of Monday afternoon, Jan. 18, there have been 16,327 confirmed cases countywide, 2,576 active cases, 153 hospitalizations and 304 deaths since the pandemic broke out last year.

The Dover POD was open by appointment from 10 a.m. to 4 p.m. Yet in spite of the immense need for vaccinations and the intense demand statewide, northeastern Dutchess residents didn’t appear to swarm the site. Absent was the expected long line stretching out in front of the school building. Instead patients were admitted swiftly into the school building once their identification and eligibility had been verified.

Once inside, eligible residents had their temperatures checked and were asked about any symptoms they might have.

After being administered either the Moderna or the Pfizer version of the vaccine, patients were asked to wait in the lobby for 10 minutes to see if they experienced any side effects before making an appointment for their follow up shot.

“It’s nice that this resource is available that I don’t have to travel down county or down state,” said Pawling resident and kindergarten teacher Tom Sullivan following his appointment. “It’s assuring — less travel time and I get to be with my family sooner.”

“It was great — you wait 15 minutes, you set up your meeting for your next shot and you’re done,” said Joseph Albanese, a resident of Middletown, who qualified for the vaccine as a senior citizen; he received the Pfizer vaccine.

Considering his role in the county’s administration of a vaccination program for such an historical pandemic, Dutchess County Assistant County Executive Ron Hicks said, “Every one of us in county government has had to pivot to do what we do to test, to vaccinate, to support our community. It’s actually an honor.”

The county announced on Monday, Jan. 18, it has opened new appointment slots for those eligible for Phase 1a and 1b, as it is set to receive 600 doses of the Moderna vaccine and is planning to host 600 additional appointments this week, well below its distribution capacity.

“Vaccine supply remains very limited from the state and federal government and supply allocations are not guaranteed,” according to Molinaro’s office, warning that “all appointments should be considered tentative and are subject to cancellation if the county does not receive its expected allocation.”

For more information on the county POD sites, go to www.dutchessny.gov.