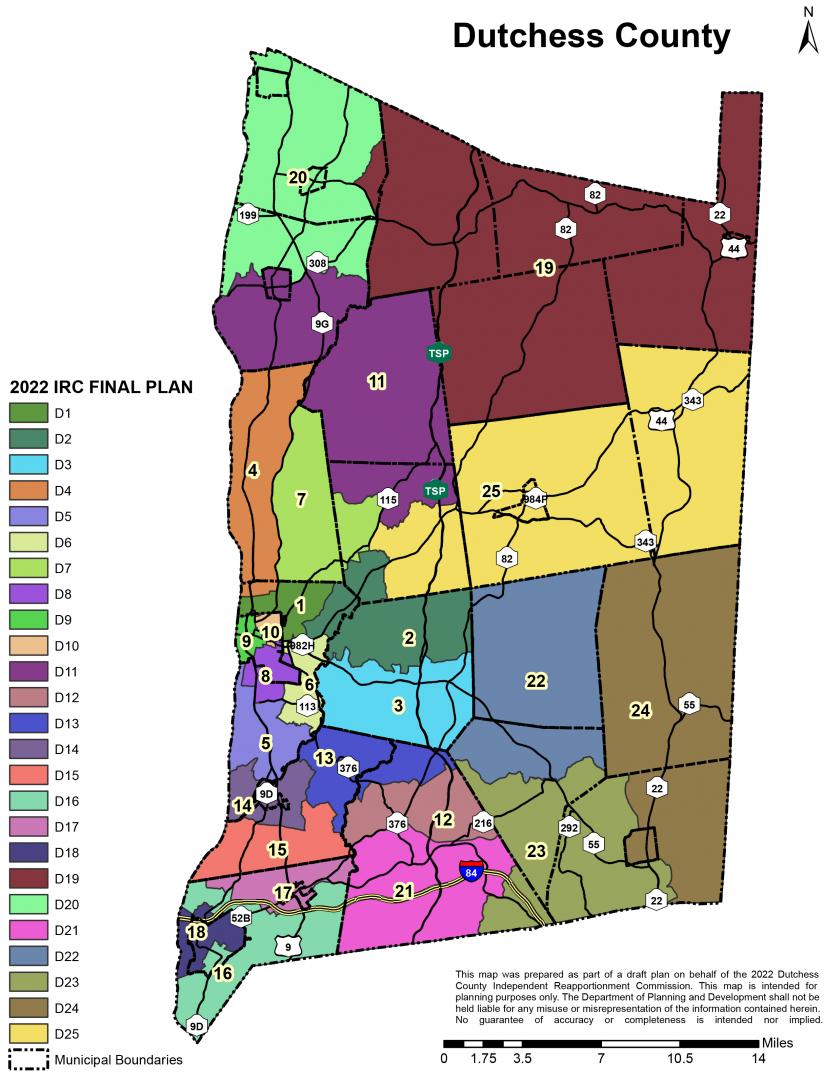 POUGHKEEPSIE — A task that at one time seemed like it might never get completed is now finally done, as the new Dutchess Independent Redistricting Commission (IRC) announced last week it has completed the work it was assigned.

That assignment was not a  simple one, as the previous commission that was created to do so two years earlier had failed. The new IRC had more success, and was able to draw 25 new districts for the Dutchess County Legislature, following the results of the 2020 U.S. Census count.

The move comes on the heels of the Legislature passing a local law in 2019, which was written by Legislature Chairman Gregg Pulver (R-19), a multi-generational farmer from Pine Plains; the law was signed by County Executive Marc Molinaro; it was also approved by public referendum, which allowed the establishment of an Independent Reapportionment Commission to reapportion legislative districts.

The local law was heralded by leaders from both parties and seen as the end to gerrymandering in Dutchess County.

The Independent Reapportionment Commission will administer the redistricting process to follow the Census Count every 10 years from this point forward.

The original IRC created to redraw the maps after the 2020 Census disbanded after the Democratic Minority Leader appointed someone to the group who turned out to be ineligible to serve.

That member, Richard Keller-Coffey, turned out to belong to the local North East (Webutuck) Central School District Board of Education. According to the bylaws, that disqualified him from sitting on the IRC.

Keller-Coffey had said in an interview with this newspaper at the time he was unaware of the conflict, noting the lawyer who vetted all members for the group also seemed unaware of the restriction, as a red flag was never waved to raise concern with his volunteering to serve on the commission.

Some of the former IRC members challenged its abolishment in court; the lawsuit was later dismissed by the Honorable Hal B. Greenwald.

Afterward, the Legislature began the process to create the IRC anew. The new commission has taken months to research, listen to public comments, hold public hearings and finally draft plans for the redrawn map.

The 25 legislative districts are now finalized and reapportioned and will serve voters county wide for the next decade. When the next U.S. Census count is done in 2030, the redistricting process for the Dutchess County Legislature will then be done all over again.

“The IRC process worked, giving Dutchess new districts that will serve us in the coming years,” said Pulver. “We were able to create a new commission, get reapportionment done and continue with the business of the county. The independent IRC model will… ensure an unbiased reapportionment process to uphold electoral integrity in Dutchess. I hope the county will apply lessons learned this year to 2030.”