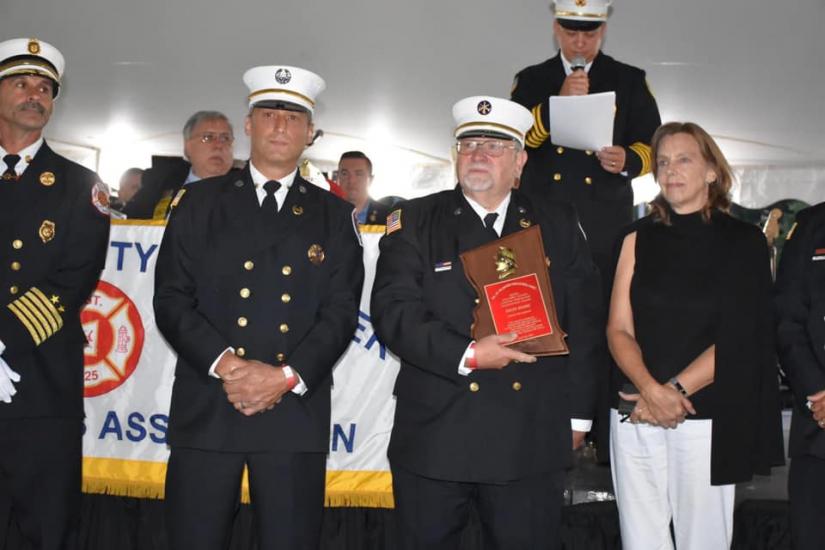 November 23, 2021
By
Kaitlin Lyle
kaitlinl@millertonnews.com
“Randi is probably the most dedicated guy I ever met in reference to firefighter service,” Copake Fire Chief John DeRocha

COPAKE — Taking tremendous pride in the level of dedication demonstrated by its firefighters, the town of Copake congratulated Deputy Fire Chief Randi Shadic of the Copake Fire Company for being recognized by the Columbia County Volunteer Firefighters Association (CCVFA) as a recipient of the CCVFA’s 2020 Firefighter Lifetime Achievement Award in July.

A lifelong resident of Copake, Shadic’s background as a firefighter has always had a family focus. Both of his grandfathers, Clayton Hedges and William Shadic, were members of the Copake Fire Company. Hedges served as a charter member when the company was formed in 1925. His father, Miller Shadic, had over 50 active years of service with the company where he served as a chief, commissioner and president.

Following in his family’s footsteps, Shadic said, “It was always part of my family growing up and I was always interested in the fire service end of it, and as soon as I could, I joined as early as I could.”

In July of 1975, Shadic joined the Copake Fire Company at the age of 17, where he has been volunteering for the last 46 years — 30 of which he held the titles of fire chief and deputy fire chief on and off.

To Shadic, volunteering has always been about providing a service that benefits people in some way in their time of need. Many times, he said it’s not necessarily about fires as the company does so much more in rescue work, from rope rescue services and cold water services to responding to cardiac arrests and rescuing animals.

“It’s a variety of things we respond to,” Shadic said, “and we’ve kind of always said we often see and meet people on their worst day, and if we can bring something to make their day better, that’s what the work is.”

Along with his work with the Copake Fire Company, Shadic’s career incorporates several roles in the fire service field.

An opening for fire chief became available at the Copake Fire Company in 2015, right around the time Shadic had retired from his career.

Initially taking the job until the company could find someone else, he served as fire chief for another four years. Shadic stepped down from the fire chief position this year and has since assumed the responsibilities of deputy fire chief to help current Fire Chief John DeRocha.

“Randi is an exceptional person,” DeRocha said. “He’s extremely dedicated, probably the most dedicated guy I ever met in reference to firefighter service… His experiences and what he brings to the fire company are unmatched, in my opinion, to anyone who worked the fire service. I know where the Copake Fire Company is in many aspects due to Randi Shadic and his dedication.”

Asked how he felt about being recognized for his service and the prestigious award, Shadic said it was truly an honor. And while the recognition wasn’t something he anticipated, he was appreciative for the recognition and those who thought him worthy of it.

Considering what his 46 years with the company has taught him, Shadic said, “It’s not about the individuals, it’s about a team that does work together to provide success and results, and I was part of that team. Everybody has their roles and responsibilities and I always prefer seeing teams being recognized over individuals. As much as I was honored to receive the honor, I was just doing my job as part of the team.”

“To engage with Assistant Fire Chief Shadic is to be immediately impressed by the expertise, professionalism and humility of this good man,” said Copake town Supervisor Jeanne Mettler. “We are proud and thankful that he is one of ours.”