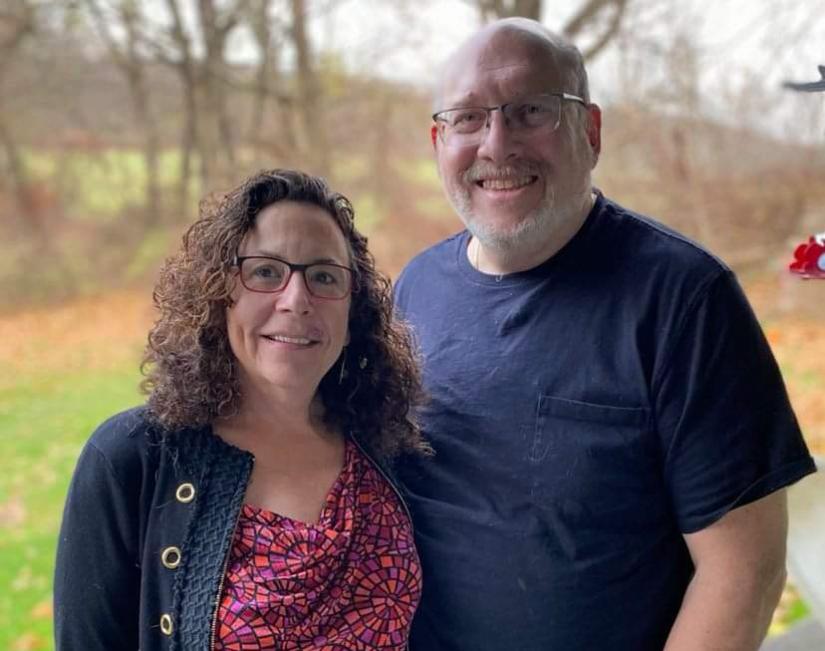 Chris Norstein and her husband, Warren, who is the chef and owner of Big W’s BBQ in Wingdale, had a rare quiet moment to pose for this photo during warmer weather. Warren spends most of his time smoking meats for hours at his very popular restaurant, which sold turkey feasts for Thanksgiving and will do so again for Christmas. Photo by oOivia Norstein

WINGDALE — Ask Warren Norstein of Big W’s what’s cookin’ and he’ll happily explain not just what’s on the menu, but how it got there and exactly what makes his mouth watering BBQ good enough to drive miles for.

He is also the man responsible for the dozens upon dozens of feasts of slowly smoked turkeys, chickens and ducks gracing Thanksgiving tables throughout the Tri-State region, as he’ll do for the coming holidays — despite COVID-19 shortages.

A perpetually jovial man, Norstein said, “no offense to any turkey people,” but turkeys are “a stupid bird in life and in death… wet and cold.”

How it all began…

He touts the technique of smoking because when cooked in ovens much warmer than his smokers, the birds’ water content becomes “excited” and drops down into the pans, which can make for great gravy but sadly for birds that can be “dried out and nasty.”

Beyond being a great BBQ guy, for 14 years Norstein cut his teeth at “fancy French” restaurants throughout The Big Apple like Bouley, rising like yeasty bread to the lofty position of manager of “some of the bigger kitchens.” Thinking about the direction his life was taking, he made a detour north to spend more time with his wife, three children and “another on the way.”

With his wife working as a nurse, he did the daddy thing — and was the only guy in the room with all the other mothers for almost four years. Then, “[I]realized I needed to work, and I needed to cook. But the notion of going back to New York City and giving up what I had already gotten out of my relationship with my children didn’t seem worth it.”

A French chef tries to BBQ

This Brooklyn kid said, “I had been coaxed by a whole bunch of people to do BBQ” he said. “[I] had never actually eaten it before.”

Agreeing to emulate Southern grillmasters who would BBQ and sell their goods along the roadside, he learned quickly.

“There is, by the way, a reason they started doing it that way down there. The weather is very accommodating,” said Norstein.

Climate aside, 20 years ago, he and his New Jersey brother built a couple of smokers and experimented. A trip to Arkansas and a kitchen truck equipped by Ebay, and he was more or less in business. Back then, he said, “there was nobody doing any kind of cooking on the street… so there was nobody to ask, ‘What do you do?’ ‘How do you do this?’ And quite frankly that was a good thing because I didn’t know what I couldn’t do.”

He began his venture “on a part of the road where I was pretty sure nobody would ever see me,” he said. “This way I could guarantee that I’d tried it,  would go out of business and I could spare myself the anguish of doing it too long.”

He planned on a clientele of “workers who were out on the streets doing construction and that kind of thing… who were too dirty to go into restaurants,” he said. The classically trained French chef said he thought he could feed them well, for less than they were paying for fast food or bagged lunches.

Norstein didn’t reckon on their schedules, however, and found that by the time he’d spent seven hours smoking the meat, they were already headed home. He “switched very quickly from dirty guys with Carhartt jackets to women who were looking to feed their families “with far more than a third of a rack of ribs.”

A roof over his head

He moved to the lawn of an  “incredulous” but savvy collision shop owner on Route 22 who insisted he “do it properly.”

“At that point I couldn’t be noncommittal,” he said. “He was looking for me to put up or shut up. So I did it. And we couldn’t keep enough food, even though [we kept redoubling amounts].”

When lines were long, his wife, Chris, would put fluttering Post-it notes on customers’ shirts indicating the number of racks they would be allowed,  guaranteeing that “the last person standing in line would get fed, and nobody would be angry.”

He had never wanted to open his own restaurant, but customers were not to be denied. So 17 years ago, after four exhausting years selling out of tender smoked pulled pork, dry rub slow smoked spareribs, smoked brisket and slow smoked chicken, this good guy left the road and, with his family working alongside him when they could, “ended up in this little deli space in downtown bustling Wingdale, N.Y.,” providing great BBQ and now holiday feasts — Thanksgiving and Christmas included -— which he first started in order to feed his workers whom, he said, deserved the day off.