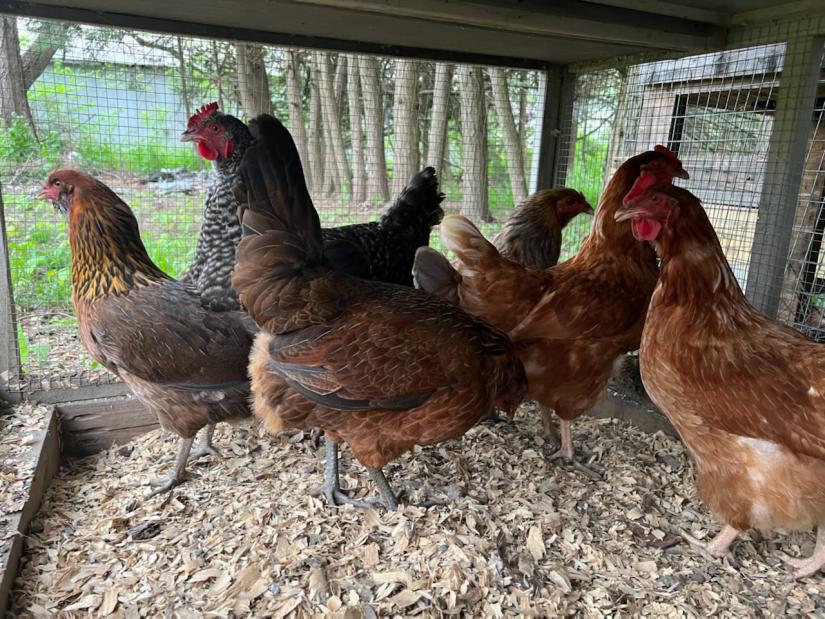 These chickens are strong and healthy, but their keeper remains on the lookout for the avian flu to make sure the flock remains so and does not catch the highly pathogenic avian flu. Photo submitted

Avian flu remains a concern in the Hudson Valley

HUDSON VALLEY — The highly pathogenic avian flu continues to cost an enormous amount of money and caused a great deal of fear in the United States, and right here in the Hudson Valley. According to the World Health Organization (WHO),  the first case of human H5N1 avian flu in the United States was first reported on April 28. The  the first reported case to involved a human was reported in China on April 26 and involved the H3N8 strain.

By the second week in May, the avian flu had already killed 37.55 million poultry in the U.S., and spread to 34 states, including New York.

As of June 1, U.S. Secretary of Agriculture Tom Vilsack said he is willing to appropriate more funds than he initially believed necessary to continue the fight the deadly disease.

An initial $130 million was approved to give to the Animal and Plant Health Inspection Service (APHIS) to do so. By late April he added another $263 million to those funds and at the end of May he added gave another $400 million to the Commodity Credit Corporation (CCC), an agency run out of APHIS. In total that brings the government’s investment in fighting this disease to $793 million.

The CCC funds several programs, such as the Farm Service Agency and the Agricultural Marketing Service and the Foreign Agricultural Service; up to $30 billion may be borrowed from the U.S. Treasury if needed

With spring now here and summer on its way, more people are spending their free time hiking, gardening, and bird watching.

Most people seem to enjoy looking for the ubiquitous robins and many keep their feeders are restocked with birdseed and their bird baths filled with water. But as birdwatchers hope to see plenty of their feathered friends, be it birds, the occasional duck, goose, owl, eagle or hawk the government and the New York State Department of Environmental Conservation (DEC) are warning that foul may not be healthy.

To put bird enthusiasts’ minds at ease, though, know that the highly contagious bird virus is not considered a threat to humans. So far, just one human being has been reported to have contacted the HSN1 strain of the avian flu. That patient was a farm hand in Colorado who experienced mild symptoms and was reported to have recovered from the flu in about two days.

However, for wild birds in the Hudson Valley, for farmers in the region and for residents who keep small flocks of fowl in their backyards, the avian flu is often fatal. Once a bird becomes ill and a strain of the disease is detected, any birds that have been exposed must be euthanized, including entire flocks.

The DEC has confirmed that the highly contagious bird virus was found in Dutchess County as well as other New York counties as early as February of this year. The highly pathogenic strain found in domesticated flocks and wild birds is known as HPA1, and  is spread by migrating birds, most notably gulls and shorebirds, as well as ducks, geese and others.

Commissioner of the State Department of Agriculture and Markets Richard Ball advised New Yorkers who are raising chickens or other poultry to avoid attract migrating wild birds, geese or ducks to their property.

Also, be aware that the virus can be carried on one’s shoes, clothes, in one’s car or on the tires of one’s vehicle.

Staying alert and aware is key to avoiding the spread of the disease by poultry inspectors and others during inspections or when visiting farms. Wearing shoe coverings or disinfecting shoes can help to stem the spread as well.

Symptoms common in wild birds include: apathy; difficulty breathing; leg/wing paralysis; a twisted neck, head tilted at an angle; walking in circles; tremors; uncoordinated movements; difficulty standing; difficulty arching its back. Other symptoms of the avian flu to check for if one keeps foul include one’s flock not eating, discoloration and strange head movements. Check daily, and if a problem arises, have an expert conduct a test.

Co-Director of Cornell Wildlife Health Labs Krysten Schuler tracks wildlife disease. She’s hopeful the disease may burn out as it’s done in the past.  Schuler  explained HPAI follows a seasonal pattern and said typically by the start of June, the virus dies out.

However because some birds don’t migrate, that can make it difficult. Signs of dead ducks, geese, bald eagles, herons, owls, hawks and turkey vultures are red flags and should be reported to the DEC for tracking. The DEC may be reached at 845-356-3098.

Among the bird fatalities in New York attributed to the current outbreak of avian flu thus far, according to the U.S. Department of Agriculture (USDA), include nine bald eagles, as a Cooper’s hawk, a flock of snow geese and two flocks of pheasant (one in Dutchess County).

The Cornell Cooperative Extension in Millbrook recommends homeowners remove any wild bird feeders to reduce the chances of transmission between wild and domestic birds.