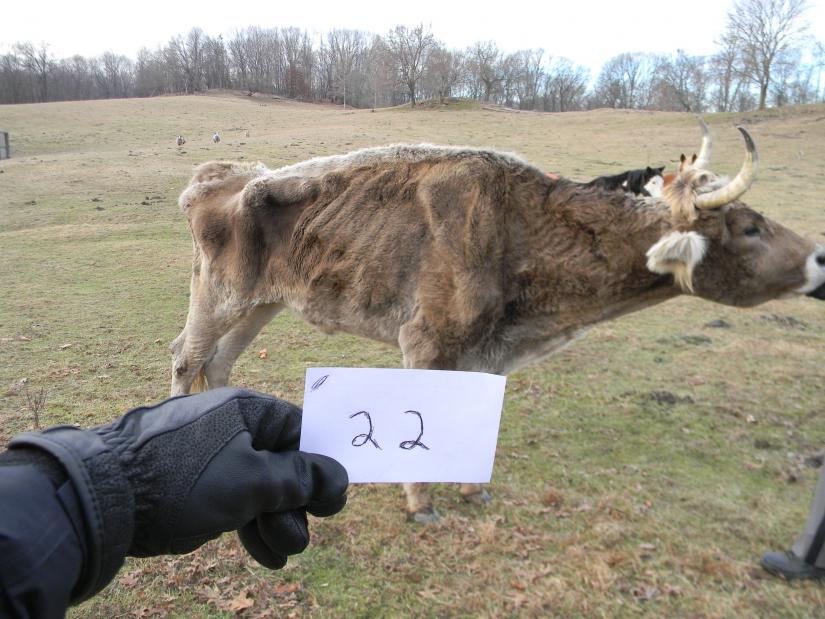 CLERMONT – This holiday season, the New York State Police (NYSP) Troop K started an investigation into a Columbia County farmer accused of severely neglecting and abusing nearly 40 animals. At the time, authorities withheld the name of the farm, and even the name of the town in which it was located, as they pursued their investigation. On Tuesday, March 17, the NYSP in conjunction with the Columbia County District Attorney’s Office arrested Andrea Nussinow, age 57, of Blue Star Farm of Clermont.

According to the state police, “Nussinow was charged with 35 counts of Agriculture and Markets Law [section 353], including the overdriving, torturing and injuring of animals, or failure to provide proper sustenance, an unclassified misdemeanor.”

Mia Genovesi, founder and director of Godspeed Horse Hostel in Amenia, offered her assistance when the animals were seized in January. She helped rescue the 38 animals, including 21 horses ranging in age from 6 months to their teens. There were also six sheep, two goats, two cows, one donkey and seven cats brought to Godspeed. They were in very poor condition.

At the time, Genovesi explained how badly abused the 38 animals were. She said there is something called the Henneke Scale that veterinarians use to determine if animals are at their appropriate weight. According to the scale, a one is considered emaciated and a nine is considered obese. She said two-thirds of the animals rescued in this case were on the “low end” of the scale.

She heralded the recent arrest and praised the investigators.

“This is a victory for animal rights as well as animal rescuers, activists and supporters,” said Genovesi last week, who is also the animal control officer for the town of Amenia. “We are very pleased.”

Currently, she added, she is using three farms in Amenia to house half the animals; five of which remain at Godspeed.

“They are doing amazing now and we wanted them to have larger enclosures and plenty of pasture,” said Genovesi.

It was on Dec. 2, 2019, that the NYSP in Livingston received a complaint of possible animal neglect on Nevis Road in the town of Clermont. An investigation led to three search warrants for the property, which were all executed in January 2020.

A “continued investigation with the help of local and state veterinary professionals along with the Columbia County District Attorney’s Office” led to the Nussinow’s arrest last month.

When asked if the justice system is strict enough when ruling on animal abuse cases, Genovesi was blunt.

“Short answer, no,” she said. “I am of the opinion that animals, as sentient beings, have the same vulnerabilities and need for guardianship as a human baby, and should be afforded exactly the same laws that protect people. I do not know where the disconnect lies with the lawmakers, in not recognizing that.”

She added that she “changed the mission of Godspeed of just horse rescue to outreach for all animals: companion animals, dogs, cats, domestic animals, horses, farm animals and wildlife.” She’s also lobbying Albany about changing animal cruelty offenses from misdemeanors to felonies.

“That’s why I’m vigorously working with lobbying organizations to help change the laws up in Albany,” Genovesi said in January. “I would like to see any kind of animal cruelty be a felony, with jail time, because statistically, people who abuse animals go on to abuse people.”

Nussinow was arraigned before the Columbia County Court, and released on her own recognizance.  She is next scheduled to appear before the town of Clermont Court on May 20, at 5 p.m.