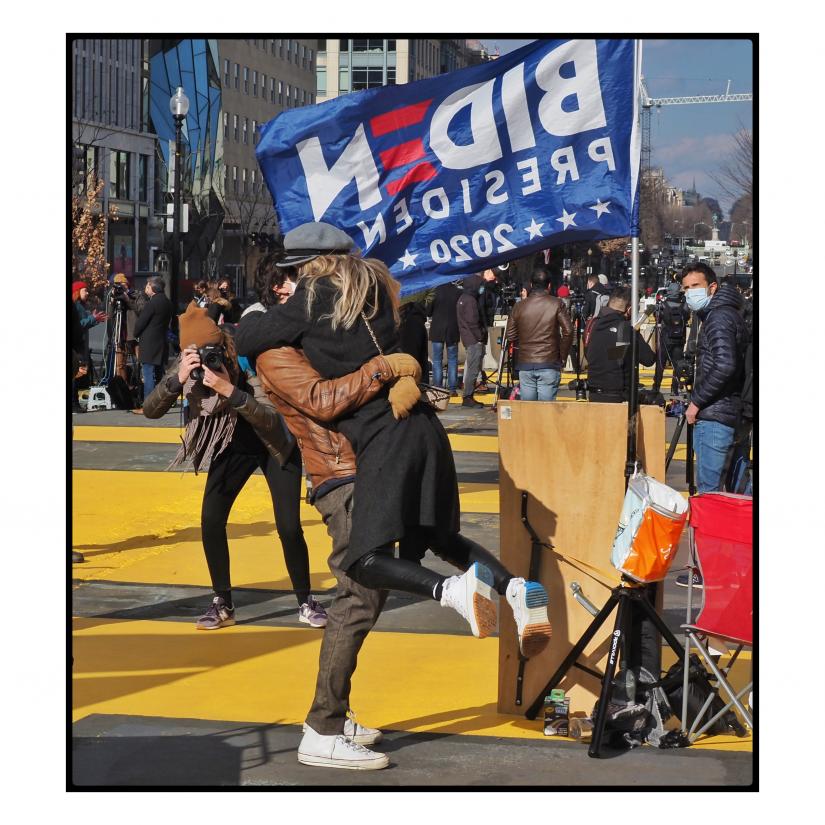 For many Americans, Jan. 20 was a day of celebration and high spirits. This young pair embraced in Washington, D.C., on Inauguration Day. Photo by Anne Day

dutchess county — The winds of change swept across the U.S. Capitol on Wednesday, Jan. 20, as Joseph R. Biden Jr. was sworn in as the 46th president of the United States shortly before noon — marking a change from a Republican to a Democratic administration. Moments earlier his running mate, Kamala D. Harris, became the first woman, the first African American and the first Asian American to ever take the oath of office as this nation’s vice president. It was, to be sure, an historic day.

“At this hour, my friends, democracy has prevailed,” said Biden after being sworn in by Chief Justice John Roberts.

It was a turbulent road to the White House, which took four days for major news outlets including the New York Times and the Associated Press to announce the results, which continued to be questioned up until and even after Biden’s inauguration.

On Jan. 6, 15 days before the transfer of power, thousands of extremists left a pro-Trump rally and stormed the U.S. Capitol Building to protest the certification of the Electoral College results. The violent rampage caused major property damage in the halls of Congress and left five people dead, including a Capitol Police officer.

Investigations into many hundreds of agitators around the country are ongoing and hundreds of arrests have reportedly been made — many on federal charges. The riot led to the installation of 25,000 National Guard troops in Washington, D.C., on Inauguration Day along with other law enforcement agencies to protect Biden, Harris and their families during the scaled down ceremony, which went off without a hitch.

Now that America has a new president and vice president at the helm, lawmakers in Dutchess County are looking toward Washington to help right the ship for 2021 and the next four years — just for a start. The COVID-19 pandemic and the stalled economy are the two looming issues, then there are others including police reform, social justice, political extremism, gun control and climate change, to name a few.

“I think that if they stay true to their word of working both sides together we’ll do just fine,” said Chair of the Dutchess County Legislature A. Gregg Pulver (R-19). “If they continue this partisan divide we’ve had for the last four years, nothing will get done and we will all suffer for it. But honestly, I have hope. The key is reaching across the aisle and working together. The first 100 days will set the tone of how this goes.”

Pulver, a Republican who has spent decades in public service, added that now that both the Senate and the House of Representatives are under Democratic control, as is the Executive Branch, things will be different in Washington.

“Honestly, I believe Congress will do the right thing and work with the president,” he said, adding there are many “sub-parties and caucuses in federal government” for the president to work with, which means he’ll have to be willing to compromise as well as the Republicans. “I’m willing to give him the benefit of the doubt. I wish for his success, because if he doesn’t succeed, then we all suffer.”

Dutchess County Executive Marc Molinaro, also a Republican, released a statement commenting on Biden’s inauguration, welcoming him and Harris to their new roles.

“This inauguration, this transfer of power, is a celebration of what makes America so extraordinary,” stated Molinaro. “There is much to be done as we respond to this pandemic, rebuild our economy, restore our communities and seek to heal our country.”

North East town Supervisor Chris Kennan, a Democrat, said he is looking forward to the new administration’s leadership, and hopes it will trickle down to benefit northeastern Dutchess County, Millerton and surrounding communities.

“I think we are happy to see such a positive message coming from Washington, D.C. Certainly the focus on the coronavirus is really welcome,” he said, “and I hope they can come up with a stimulus package that provides help to some people who have been severely impacted by COVID, who have lost income, whose children  have had to go school remotely. The disease itself has disrupted and damaged lives in so many ways, I think the focus right off the bat is very welcome.

“It’s also very encouraging hearing about the possibility about some help with infrastructure,” added Kennan. “We have a great need for repairing our water systems and getting a wastewater system in our community. If that is something that is now more attainable that would be great.”

Pulver agreed that with Biden and Harris in office, not to mention that New York State Senator Chuck Schumer is now the new Democratic Senate majority leader, that could mean more money for New York State and potentially more power to fight both the pandemic and the failing economy.

“We certainly need money, said Pulver flatly. “We have New York City, and because of our close proximity and all our business, we need some direct federal aid. I do think our number one thing is we need federal aid in dealing with the shortfall of state sales tax and everything else we’re trying to make up, which is a significant amount of money. That and more vaccines. You see what happened, [the county] got 600 vaccines that were gone in 3 seconds. We’re not getting what we need. Nobody in New York State is and we need to figure that out.”

President Biden, for his part, told those watching and listening to his Inaugural Address that he would work for “all Americans.” His theme was one of unity. His goal, to end what he called “this uncivil war,” and move forward with hope and optimism.

“And we must meet this moment as the United States of America,” said the president. “If we do that, I guarantee you we will not fail. We have never, ever, ever, ever failed in America when we’ve acted together.”