Skip to main content
THIS WEEK'S DIGITAL EDITIONS
Home / Home
Home » Millerton News Guest Commentary Regional » Parallels between one pandemic and another: A reflection on the 1918 Spanish Flu 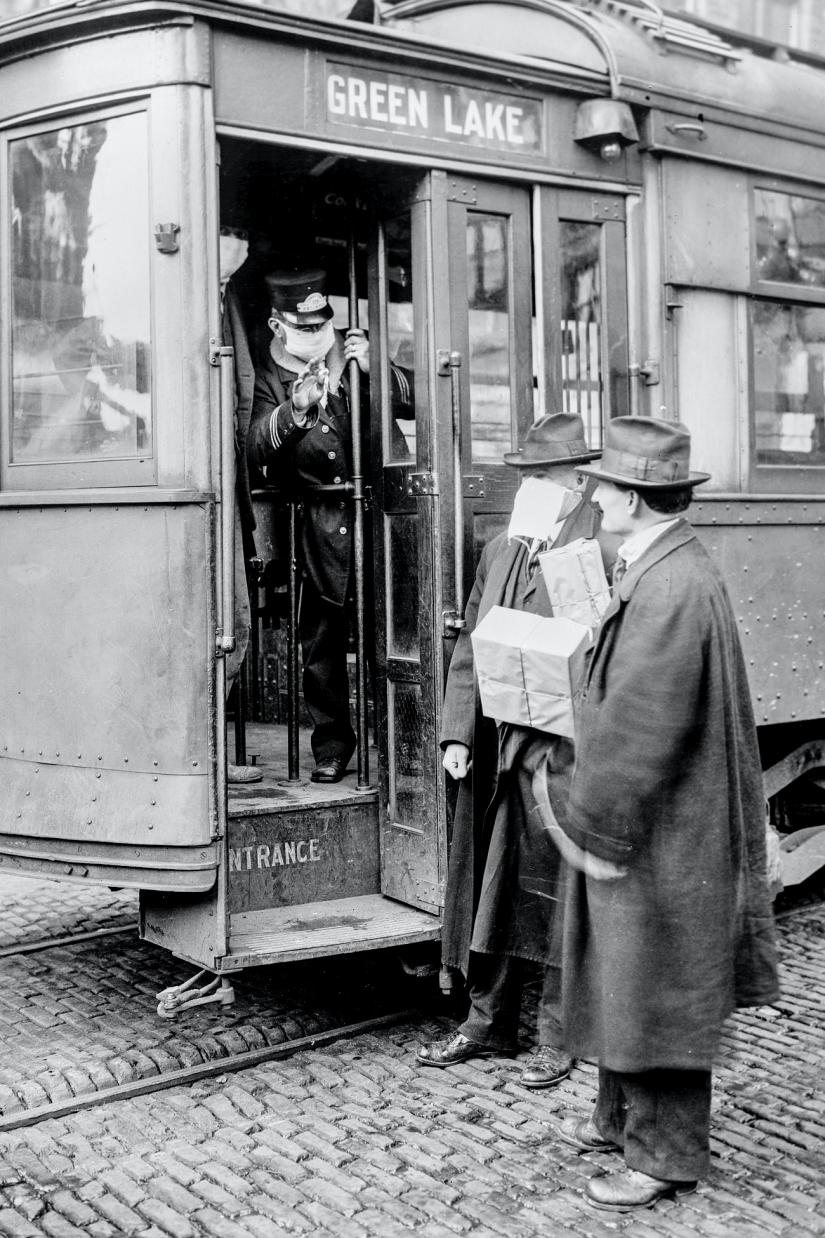 Precaution during the Spanish Influenza Epidemic would not permit anyone to ride on the street cars without wearing a mask, including those pictured above in this image from Seattle, Wash. (ca.1918), according to the Library of Congress. Original image from Library of Congress; Digitally enhanced by rawpixel

Parallels between one pandemic and another: A reflection on the 1918 Spanish Flu

In days past — not so very long ago — small town newspapers acted as backyard fences: Visitors were introduced, trips noted, luncheons reported and activity in general was tracked. And so, it is not surprising to read in copies of local newspapers from the 1918s and 1919s, hundreds of reports of the details of the Spanish Influenza — who had it — who recovered — who was tending the sick — and, sadly — who succumbed to the deadly illness. The trip down memory lane is especially timely as we deal with the coronavirus pandemic today, watching hundreds of thousands die the world over.

Imagine opening the newspaper not knowing if it was to be a harbinger of news good or bad. Readers were torn when neighbor learned that neighbor was ill. Was the house to be avoided — or was needed nourishment to be shared?

Those century-old reports were unlike those of this year’s COVID-19 pandemic, which is shrouded by HIPAA regulations that keep names discretely hidden. Reports today center on numbers. Victims of the 1918 epidemic had names and faces; the scourge was personal, and it was everywhere.

Responses varied. In the same week that one game was canceled, another home team’s victory was touted. The Sharon Messenger portion of The Harlem Valley Times from that time period reported the annual meeting of the Chamber of Commerce was postponed “…owing to the prevailing epidemic of influenza and the consequent closing of schools, movies and churches and the objection to any public gathering…”

Bowling at one church was suspended due to the influenza, while another’s Sunday School was resumed after several weeks of closure. Schools were closed and opened and then closed again although students were allowed to take the required Regents examinations. Life went on as Fatty Arbuckle and Tom Mix invited residents to leave their troubles behind and find entertainment on the silver screen.

Even without the illness, times were fraught. The world was at war. Thousands upon thousands of families had seen their sons leave to fight for their lives — others had seen their daughters leave to nurse those in need.

And now this — a frightful infection.

Betsy Strauss of both the Amenia and North East Historical Societies recently presented a lecture to the former in which she explained that two of that town’s own soldiers had died of the virus — one before he left the country and the other across the sea.

Indeed the country’s military had been sorely hit with the first cases allegedly reported at Fort Funston in Kansas, where hundreds became infected — some dying — others spreading the virus in America and abroad.

The Red Cross called for thousands of masks. Ironically those were sent to military installations instead of staying locally, where they could have also provided protection. Eventually the use of masks did spread to the civilian population, with some laws requiring their use as we have seen today.

Residents looking for good news found some of the year’s best in The Harlem Valley Times on Nov 9, 1918. In a harbinger of  the Armistice, Chester, the son of Mr. and Mrs. George Reed of Amenia Union, wrote from France.

Sadly, the same page also reported that Amenia’s Thomas Sheehy died of influenza at  Camp Wheeler, Virg., where he had gone for training only a week before his death. Happily, it reported three other soldiers were returning home after having survived the virus.

Experts did their best to provide advice, but as William Tatum III, Dutchess County historian, noted, some came at a heavy price. Exercise, it was believed, would provide some protection, and so residents were urged to become fit with gym memberships offered in enclosed buildings with infected droplets filling the air as many breathed those viral droplets in.

Newspapers far and wide, including both The Millbrook Mirror and Roundtable, printed information from the U.S. Public Health Service Official Health Bulletin, including an effort to clarify the source of the pandemic.

“Although King Alphanso of Spain was one of the victims of the Influenza Epidemic in 1893 and again this summer, Spanish authorities repudiate any claim to influenza as a ‘Spanish’ disease,” stated the bulletin.

It went on to warn, “If the people of this country do not take care the epidemic will become so widespread throughout the United States that soon we shall hear the disease called the ‘American Influenza.’”

Regarding unproven treatments, it further warned, “Only such medicine should be given as is prescribed by the doctor. It is foolish to ask the druggist to prescribe and may be dangerous to take the so-called ‘safe, sure and harmless’ remedies advertised by patent medicine manufacturers.” Such words of advice might have benefitted some of our own leaders trying to stay healthy in today’s pandemic.

To aid in providing safe care, the bulletin suggested a clothe covering should be worn by caregivers who would also “do well to guard against breathing in dangerous disease germs by wearing a simple fold of gauze or mask while near the patient.

In the end, according to the Center for the Disease Control and Prevention (CDC), about 500 million people or one-third of the world’s population eventually became infected with the Spanish Flu, with the number of deaths estimated to be at least 50 million worldwide, with about 675,000 deaths occurring in the U.S.

But end it eventually did, and people continued to read their hometown news, recognizing and rejoicing in the fact that — at least for the time — the word “influenza” no longer blackened the text. We look forward to a time when similarly, the word “coronavirus” vacates the pages.