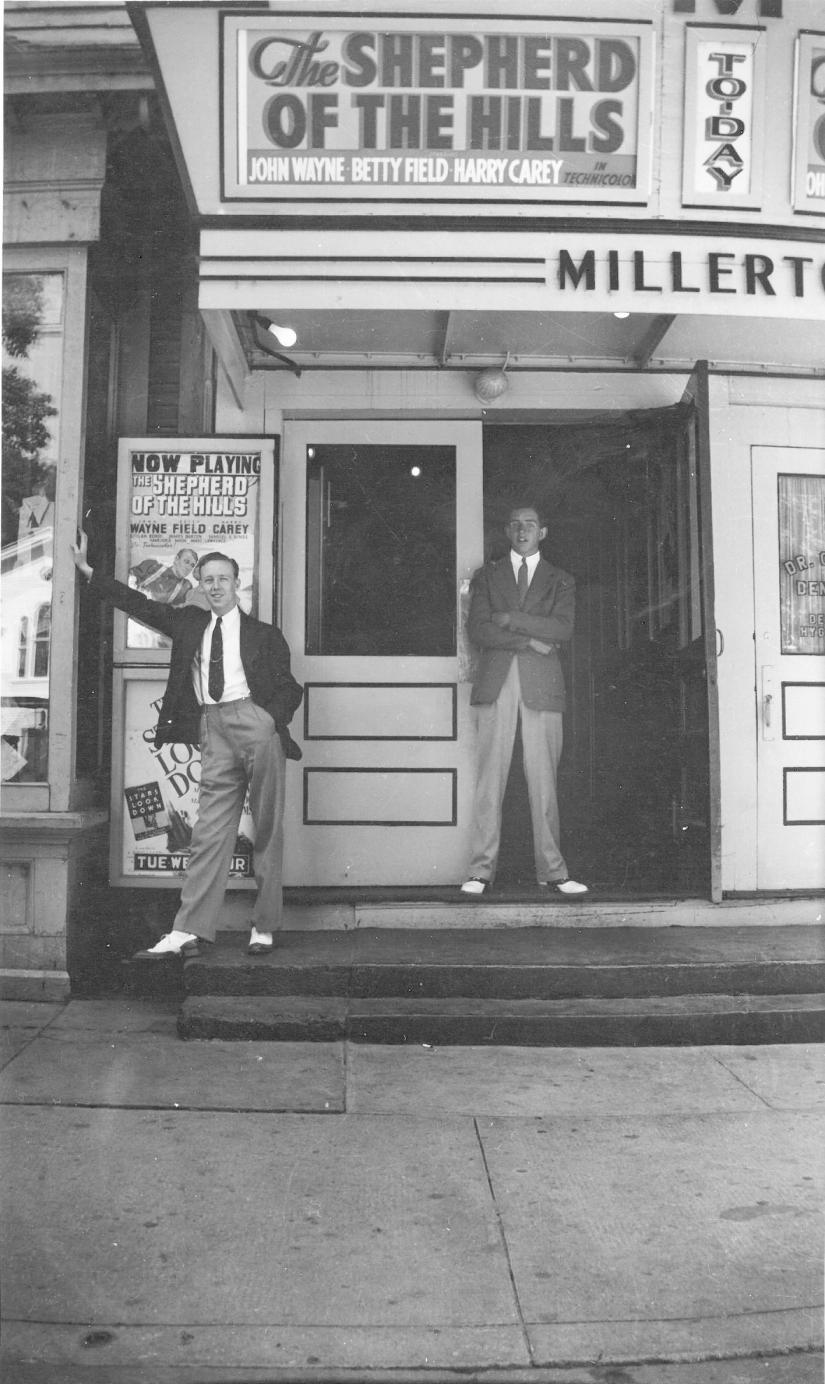 Millerton was an active village in the past, and it will be again, once the COVID-19 pandemic passes. In 1941 the Millerton Movie Theater was a popular spot. Above, from left, Robert A. Libby and Roger S. Parks posed for a shot in front of the theater. Photo courtesy of the North East Historical Society

What a difference a month can make. In early March, I was asked to write about Millerton’s lively commercial sector from an historical perspective for its special supplement, Discover Millerton.  Now the long-term effects of the coronavirus experience may dramatically change our region again, and the publication of Discover Millerton is, for the time being, on hold.

One way to think about the history of our community is as an interaction among three realities: a resource-rich landscape, periodic waves of creative entrepreneurs and its location within 100 miles of one of the largest and wealthiest cities in the world.

Millerton is where the interplay of those three themes has taken place since the mid-19th century when the railroad connected us to Manhattan. What currently influences our commerce saw its roots in the 20th century.  In 1919, Leopold (Paul) and Assunta Terni came here from Pleasantville, N.Y., to establish the iconic Terni’s store. Dick Hermans and Holly Nelson saw an opportunity to open a book store in 1975; Oblong Books & Music remains one of the village’s busiest businesses today. Attracted to the area as a weekend refuge from New York City, Robert and Carol Sadlon found a movie theater for sale and turned it into a center for cinema arts and an anchor business for the community. Years later, The Moviehouse is still one of Millerton’s main attractions. These are a few of the many talented business persons who, in their own way, looked at Millerton and instead of saying, “Why?” asked, “Why not?”

The businesses that now populate our community are the current iteration of that entrepreneurial spirit and reflect the change that has come to how goods and services are provided in the 21st century. Harney Tea and Irving Farm are businesses that have established both production and retail sales establishments in the community and who source internationally. Elizabeth’s Jewelry and Fine Gifts and Salisbury Bank and Trust have constructed new buildings, which incorporate contemporary expressions of the classic architectural features found in the 19th century buildings in the Main Street Historic District.

The farm-to-table focus of our restaurants is a natural outgrowth of the highly productive agricultural land in our town, which for centuries our talented farmers have re-purposed to meet market demands. A farmers market is now an important part of our Saturdays.

But as I write this, a pandemic has led to the closing of nearly all of our Millerton businesses. This is unheard of and devastating. Or is it?

In its earliest years, a number of Millerton’s young working men went off to serve in the Civil War. A similar thing happened in World War I, the impact of which was compounded by a flu so horrific that New York state made it a misdemeanor to cough or sneeze without covering your face. In the early 1930s, we went through the Great Depression followed in the next decade by a second World War.

In each case, Millerton survived, adjusted and renewed itself because of its extraordinary landscape, critical location and exceptional business men and women. The speed with which information and money move today has a significant impact on both our economy and the making of our public policy decisions. An upside of that phenomenon is that change and renewal can happen more quickly.

When you can once again do so, come to Millerton and be part of the next stage of this historic community’s commercial and agricultural evolution.

Edward Downey is president of the North East Historical Society.