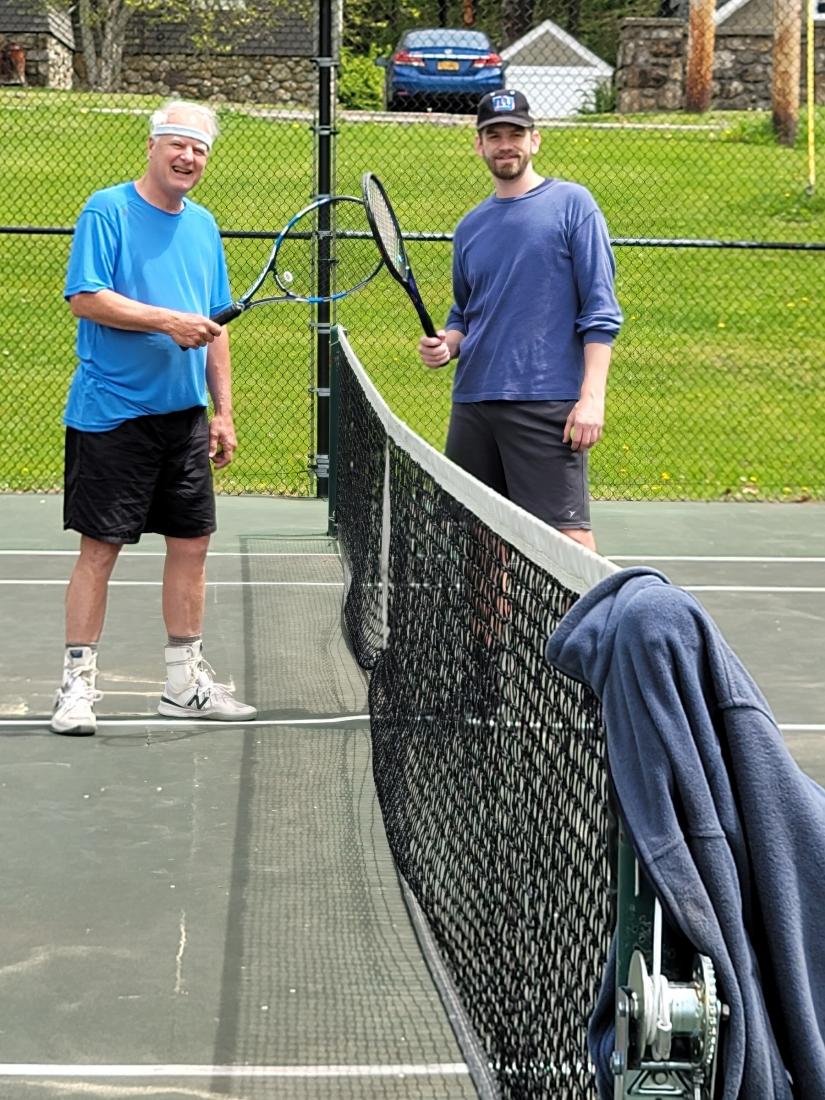 From left, Greg Kuhlman and Wesley Heilmann crossed racquets during a friendly game of tennis on the Millbrook tennis court this spring. The village is in the midst of a fundraising campaign as the court is in poor condition. Photo by Judith O'Hara Balfe.

MILLBROOK — Tennis anyone? Not if you live in Millbrook. That’s because the tennis court located near Elm Drive Elementary School, long a favorite for people who love tennis and don’t want to travel for a game, has been in a state of disrepair. In good times, two games can be played at once, enough, it seems to keep the community happy.

The village has repaired the court a few times in recent years to keep it open and community members satisfied, but these days, the entire surface needs to be redone.

That’s why the village started a fundraising campaign a number of months ago, hoping for enough donations to meet the estimated $25,000 cost to get the court in tip-top shape.

Unfortunately, said the mayor, it looks like the price for the resurfacing the court had, too.

The work will not take place until next year, and the original cost of $25,000 may now run as high as $30,000. The village will get three quotes and pick the best one when it’s ready to take the plunge.

The Village Board said it is grateful for each and every donation from the public, but hopes that more money will trickle in as it still needs to raise more funds to fix up the court.

The tennis court is set at the back of the school property, with residences across the street set well behind Maple Avenue, so there’s a certain amount of privacy. There is no schedule per se, so players set up their own times and partners. The loose structure seems to suit most of the casual players who use it.

On an early Sunday afternoon this spring, a pair of players met for a game or two. Wesley Heilmann from Millbrook and Greg Kuhlman from Sharon, Conn., met, played  and reflected a bit on where they were.

That’s how many games get set up.

When asked about schedules, he said, “Afternoons can get busy, but people tend to be decent and don’t take advantage.”

Heilmann agreed, adding that it’s nice to have a court right in the community.

The court is for tennis only; skateboarding and other activities are prohibited, going back to the early 1990s, after The Tribute Garden bought the property from the Millbrook Board of Education.

There is no counter on the gate, so no one knows exactly how many people use it. It is open to all village and town residents, free of charge; no I.D. is required. Sometimes a friend from out of town is invited by a resident for a game, but mostly it is used exclusively by the immediate community.

Kuhlman also said that since COVID-19, the court seems to have gained in popularity, tennis being one of the few games where one is naturally distanced from their opponent.