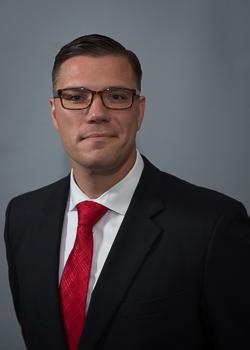 MILLBROOK — When Kyle Van De Water was pronounced dead at Vassar Brothers Medical Center in Poughkeepsie Tuesday afternoon, Sept. 7, at the age of 41, the Millbrook community he devoted so much of his adult life to lost many things. It lost a former village trustee and town volunteer; a respected lawyer; a military veteran, former JAG attorney and current Army reservist; and a former U.S. Congressional candidate. Most of all, though, it lost a family man. Van De Water was husband to his wife, Melissa, and father to a set of triplets born in 2009, Thomas, Lincoln and Annabelle, and another son born in 2014, Levi.

Van De Water, who was born in Rhinebeck and raised in Poughkeepsie, was discovered Sept. 7 shortly after noon at the Poughkeepsie Rural Cemetery by two Town of Poughkeepsie Police Officers after reports of a “man down” were called in.

Van de Water was found to be unconscious with a gunshot wound; officers reportedly performed CPR and other measures at the scene in an attempt to save his life until the ambulance arrived. He was pronounced dead a short time later at the hospital.

The Town of Poughkeepsie Police Department released a statement last week saying Van De Water’s gunshot wound was “reportedly self-inflicted.” Other branches of the police are awaiting the report of the New York medical examiner Dennis Chute before confirming cause of death.

Van De Water served in Afghanistan for eight years. An attorney, he was in the Judge Advocate General’s (JAG) Corp in the U.S. Army from 2006 to 2014. He earned a Bronze Star, a Meritorious Medal of Honor and continued to serve as a major the Army Reserve JAG Corp. He also belonged to the Millbrook Veterans of Foreign Wars Post 9008 and was an advocate for service veterans.

Having earned his law degree at Albany Law School after graduating from the University of Massachusetts at Amherst, he joined the firm of  Corbally, Gartland and Rappleyea, LLP, in Poughkeepsie where he was employed from July 2014 through February 2021. Recently he went into private practice.

“He was a war hero who put his life and well-being on the line,” County Executive Marc Molinaro said in a statement about Van De Water. “We owe him, his family and all our brave service men and women everything for the sacrifices they have made.”

Van De Water was appointed to the Millbrook Village Board in 2017 for one year. Mayor Tim Collopy, who debated Van De Water prior to the village elections in 2018 for a trustee position at the time, said he was saddened to learn of his former opponent’s passing — who always had Millbrook’s best interests at heart.

“Kyle was an active member of the Millbrook area,” said Collopy. “As a village trustee, he provided a valuable perspective with his legal background. As a veteran he modeled the importance of giving back to the community where he lived. He will be missed by his neighbors and his friends.”

Van De Water announced his second bid for Congress on July 7, again challenging incumbent U.S. Rep. Antonio Delgado (D-NY-19), whom he ran against in the last election. He later withdrew from the current race.

Delgado spoke of the man rather than the politician when he learned of his passing.

“I know he will be immensely missed, and I’m praying for all who loved him — his friends, fellow soldiers and family,” said Delgado in a statement to the press. “Kyle’s death is tragically felt not only on an individual level, but also nationally, as far too many veterans across our country are going without the support and care that their service to our great land undoubtedly necessitates.”

Former Millbrook Trustee Brian Hicks remembered his friend’s excitement about riding in a parade with his daughter.

“When he was asked as a trustee to ride in the Memorial Day Parade, Kyle asked if he could bring his daughter,” said Hicks. “He was so proud, and wanted to share the experience with her, as she would be thrilled.”

“We played varsity soccer together,” remembered Hicks. “He was an outstanding guy, a great guy and a leader in sports. He always took the initiative and was the motivating force for the team. Even as the prosecuting attorney in Stanford, years later, he did the job with the utmost integrity. It’s sad when we lose a valuable person like Kyle.”

Contact information for the National Suicide Prevention’s 24/7 hotline at 1-800-273-8255 and its website at www.suicidepreventionlifeline.org have been posted multiple times since Van De Water’s death.

So, too, has information for those in Dutchess County who are seeking local support. Those crisis services can be accessed by calling or texting the HELPLINE at 845-485-9700 or walking-in to the 24/7 Stabilization Center at 230 North Road in Poughkeepsie.

Veterans in need of emergency assistance may also contact the Veterans Crisis Line at 1-800-273-8255 and press 1.

Grace Episcopal Church in Millbrook held services for Van De Water, a former Vestry member, regular churchgoer and active member of the parish, at the church on Tuesday, Sept. 14.

A GoFundMe page was set up by Lesley Frederick, Van De Water’s sister, in the name of the Van De Water Family Fund. To get to the page, go to www.gofund.me/f2176cdd.

Melissa Van De Water wrote a comment online expressing her gratitude for not only the donations but for the support she’s received since her husband’s death.

“I am beyond grateful for all the love that everyone has shown our family throughout this time,” she stated. “To see we are not alone in a moment like this is immeasurable. Nothing has gone unnoticed and I do not have enough words to express how genuinely grateful my children and I are for everyone’s support. I know Kyle would be so happy to see how many people truly cared for him and our family.”