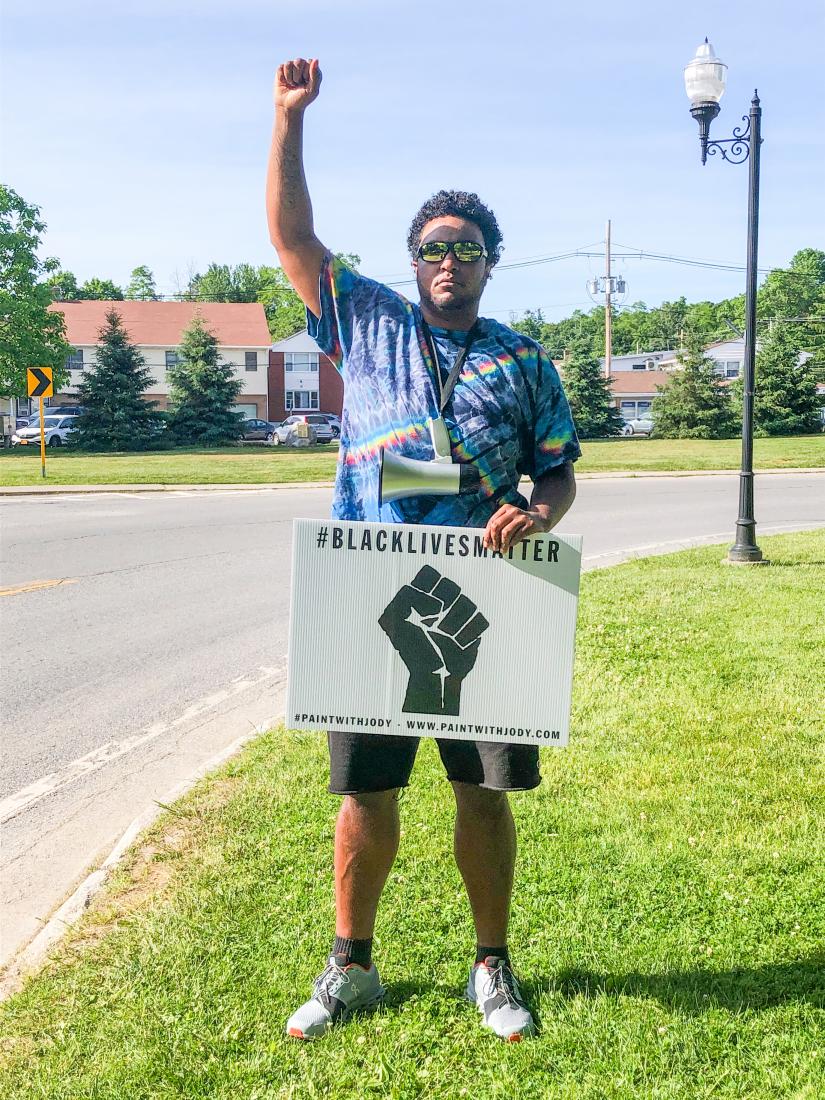 MILLBROOK — There are some things that people don’t expect to happen in the ritzy community of Millbrook — including marches and protests for social justice. But that’s exactly what has been happening, with three in particular just this past week. One was not a planned protest, but occurred when people, through social media and word of mouth, were told that on Monday, June 8, there would be a counter All Lives Matter protest to the Black Lives Matter (BLM) protest that took place on Sunday, June 7.

On Monday, a group of about 85 gathered at 4 p.m. at the Village Green, mostly young people. There were the usual cars passing by with well wishers honking their horns. Deputies from the Dutchess County Sheriff’s Office, troopers from the New York State Police barracks and the officers from the Millbrook Police Department were also present, as were Village Trustees Mike Herzog and Tim Collopy, to ensure all stayed peaceful.

Another protest took place on Friday, June 12, when a small group met in front of Washington Town Hall. After spending less than an hour there, demonstrators moved to the Village Green. This group was also made up of young people, including some from the middle and high school.

Asked why he was participating, Royal Parker, an African American, answered, “I protest because it’s one of the ways I know how to bring people together for a common goal. I protest to make a change in the world for the future generations to come. I protest because I was taught to by my grandparents and mother.

“I have been protesting since the first time George Bush Jr. was selected by the Supreme Court justices in this nation’s capitol,” he added. “I have met some amazing people while protesting, people who restore my hope and faith in a better place where a person isn’t judged by the color of their skin but by the content of their character.”

Parker is a teaching assistant who works for the Dutchess County Board of Cooperative Educational Services (BOCES) at Salt Point. Parker was one of the protesters who came to Millbrook for Monday’s rally to counter balance the All Lives Matter protest, which didn’t end up taking place; he came back to show his support for BLM again on Friday.

The only unpleasantness reported was that people in a few cars verbally harassed the protesters; one in particular with an adult couple came by three different times. Parker and others encouraged the younger participants to keep their cool and not be cajoled into reacting.

“That’s what they want, and we won’t give it to them,” said Parker.

At a Village Board meeting on Tuesday, June 9, and in private conversations, village trustees said they were worried about troublemakers. Some business owners were also worried that after being closed for three months due to the coronavirus pandemic, if things get out of hand with protesters there could be looting or fires, as there have been around the country and in New York City, and merchants wouldn’t be able to protect their livelihoods. The board agreed organizers should obtain  a permit to protest and have insurance waivers, in case of damage or injury and so the village wouldn’t incur any unforeseen expenses.

Millbrook Police Officer Jared Witt said the many protests that have taken place thus far have been peaceful and uneventful. He stated that New York police officers pledge to preserve and protect the constitution, which includes the right for citizens to protest in a peaceful manner.